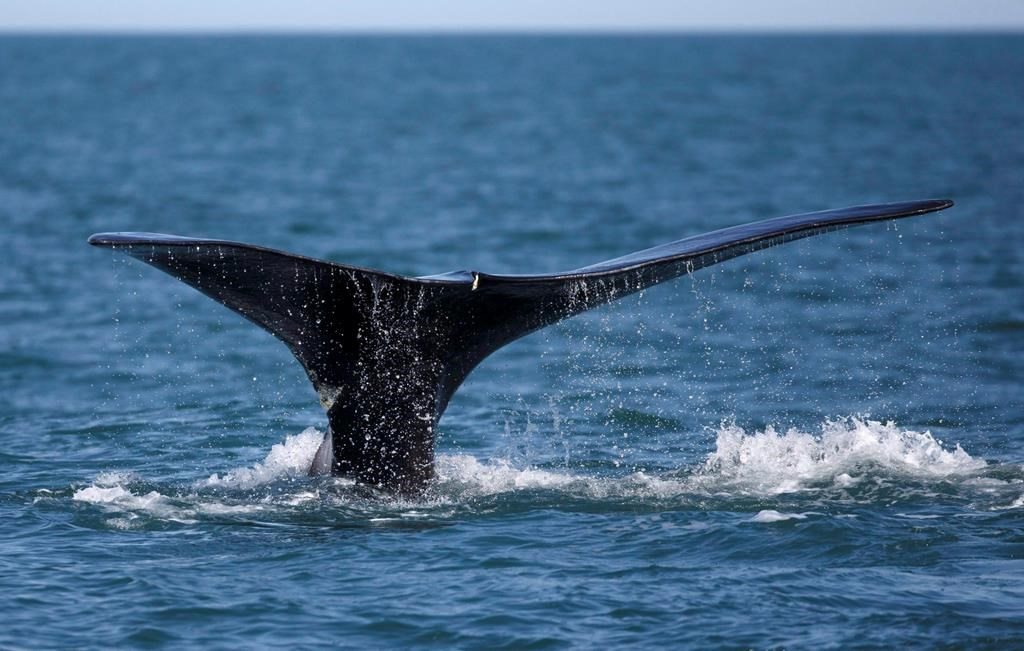 In this Wednesday, March 28, 2018 photo, a North Atlantic right whale feeds on the surface of Cape Cod bay off the coast of Plymouth, Mass. File photo by The Associated Press/Michael Dwyer
Previous story

The arrival of two endangered North Atlantic right whales in the Gulf of St. Lawrence has thrown several lucrative fisheries for a loop.

Federal authorities ordered fishermen in certain parts of the Gulf off northern New Brunswick and Quebec to get their gear out of the water by late afternoon Wednesday as part of an effort to prevent the slow, lumbering animals from getting entangled in fishing gear.

The deadline was originally Tuesday evening, but was delayed due to strong winds in the Gulf of St. Lawrence.

Marcel Godin, director of procurement for the Island Fishermen Cooperative Association Ltd., in Lameque, N.B., said fishermen are "scared" because they don't know what will happen next.

Godin's concerns were voiced amid a report of up to 40 layoffs at the Ichiboshi fish plant in Caraquet, N.B. The CBC quoted a union official as confirming the layoffs, although the company did not immediately return a request for comment from The Canadian Press.

Godin said the latest area closures come as snow crab landings are down by about half over the last two years.

"Now with the zone they just closed ... we have boats in that area and what those will do is go to another area," said Godin.

"If they close another zone there will be less and less. The more boats you have in the same area the less will be the catch because of too many traps."

Godin said the average catch per boat so far this season is about 10,000 pounds — a figure down from normal years, which saw anywhere from 20,000 to 25,000 pounds of crab per trip.

He is worried about the potential for further area closures, he said.

"If we go that way and they close areas and the catch is low the (processing) employees will be doing less hours," he said.

As things stand, Godin said the cooperative's plant in Pointe-Sapin, N.B., is doing better with higher landings of lobster to process.

A total of 18 North Atlantic right whales were killed in Canadian and U.S. waters last year — mainly due to vessel strikes and entanglement in fishing gear.

In an email, the Department of Fisheries and Oceans said a conservation and protection surveillance flight reported two right whales swimming just north of the 14,000 square kilometre area that had already been closed to fishing for the season.

"Temporary fisheries closures are pending and will be in place in the Gulf of St. Lawrence, east of Miscou Island and north of the area closed to fishing for the season," the department said.

As a result, the snow crab, toad crab, rock crab, lobster and whelk fisheries are being closed in five areas known as "grids." Closures would also be in effect for fixed gear winter flounder and Atlantic halibut fisheries, except in cases where gear is not left unattended, the department said.

The newly closed area would remain closed for 15 days, a measure that could be extended if whales remain in the area.

Moira Brown of the Canadian Whale Institute in Campobello, N.B., said researchers will start their surveillance work a little earlier than scheduled, probably in mid-June, because of suggestions the whales' primary food source — plankton — may be more plentiful sooner than previously thought.

Brown said the whales are showing up in the region earlier than they have in the past, when they would start to be seen around the end of July or early August.

"Some of the plankton work is showing that plankton is more prevalent in the Bay of Fundy earlier in the season," she said. "The whales are responding to what they need to do to find food."

She said that mirrors what researchers have seen in the last few years, with the whales turning up in the Bay of Fundy and the Gulf of St. Lawrence weeks ahead of their traditional schedule. She hadn't yet heard of any being in the Bay of Fundy.

"The Canadian government has really stepped up its surveillance program unbelievably," she said.

Robert Hache, director-general of the Acadian Crabbers Association, said fishermen are in agreement with the latest closure, but will now have to scramble to move their pots to other areas already being fished. Hache said four of the 45 crabbers he represents are affected.

Hache said the situation complicates a season where catches are already down because of the closure of a large area of the Gulf when the season opened May 1.

The season is slated to close June 30 and Hache said there have been no conversations about extending the season because of the latest closures.

Hache had previously warned of an increased likelihood of the whales arriving when many pots would still be in the water.

"We will not ask for an extension of the season," he said. "That would not be reasonable."