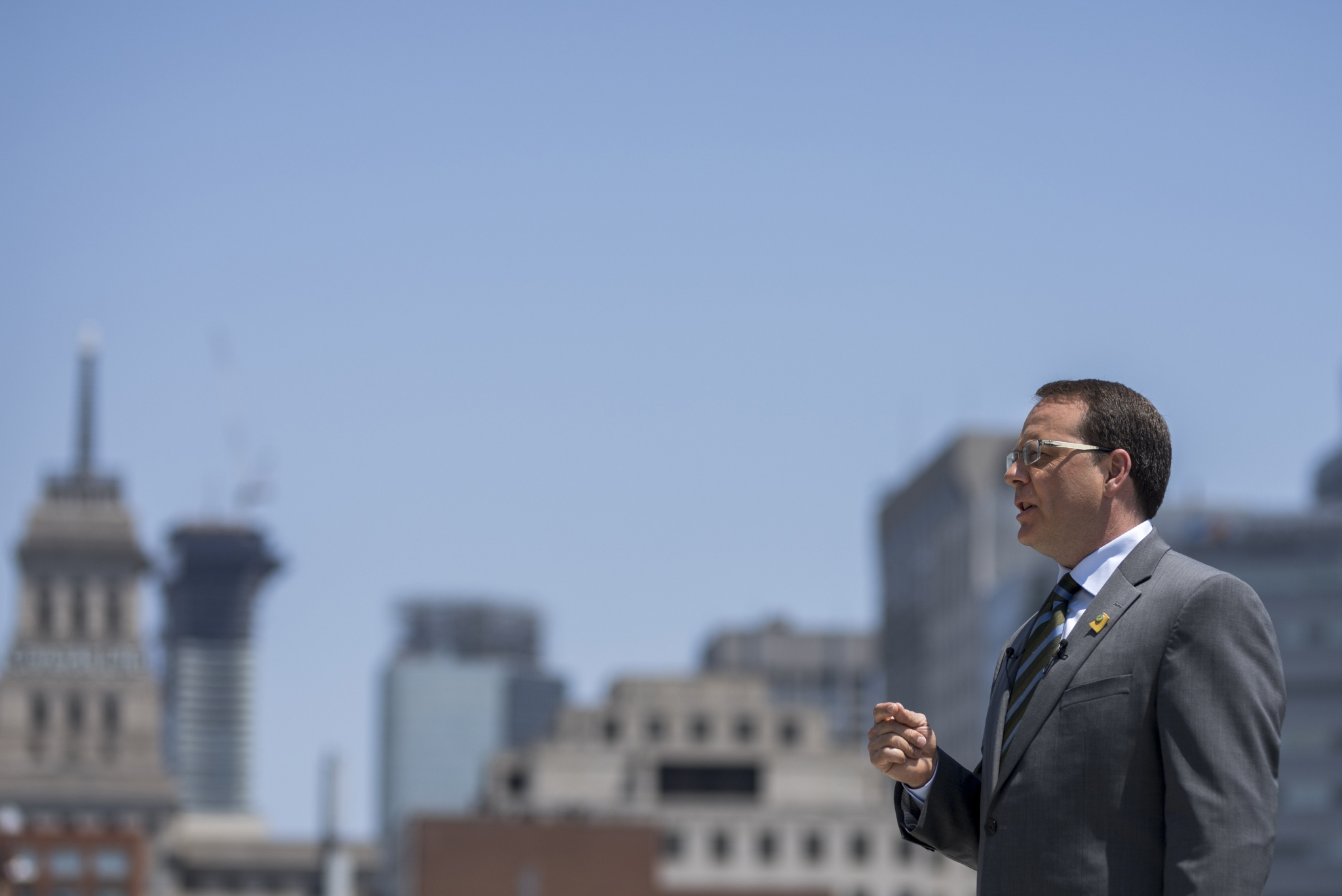 Mike Schreiner, leader of the Green Party of Ontario, speaks to reporters on a Toronto rooftop on May 24, 2018. Photo by Nick Iwanyshyn
Previous story
Next story

The three main political parties in Ontario should commit to using renewable energy for all the province’s energy needs by 2050, Green leader Mike Schreiner said on Thursday as he pushed to make climate change a larger part of the election campaign.

“As we listen to the three main establishment parties in this election, climate change is barely mentioned,” he said at a sparsely-attended media event on a rooftop in downtown Toronto.

“I’m deeply, deeply concerned that the two parties currently leading in the polls, one of them (the Progressive Conservatives) has absolutely no climate change plan whatsoever and seems to be denying it’s even a threat to people in Ontario. The other party, the NDP, barely mentions climate change at all, and its inclusion in their platform is almost an afterthought.”

At a debate in Ottawa on Wednesday night, PC candidate Goldie Ghamari said she did not believe that climate change was manmade, a widely-held conclusion of climate scientists.

“I got into politics primarily to protect my children’s future so we leave a livable legacy for them,” said Schreiner, who as leader of Ontario’s Green Party is seeking the party’s first seat in the provincial legislature in the June 7 election. “And I cannot let this campaign go by without putting up a fight for their future."

He added that in 2016 alone extreme weather had created C$4.9 billion in insurable losses.

“I don’t want to live in a world where droughts and floods and ice storms and hurricanes and other extreme weather events are the new normal. So today, I am challenging the three status quo, establishment leaders to put forward a bold vision of how your party will address the climate crisis that is affecting us. I challenge you to put forward a target and a goal that Ontario be powered with 100 per cent renewable energy by 2050.”

He said 1,000 jurisdictions around world have made that pledge, including Ontario’s Oxford county, while a final vote to pass a resolution for the same in his riding of Guelph is due on Monday.

In 2015, 60 per cent of Ontario’s electricity came from nuclear, 24 per cent from hydroelectric sources, 10 per cent from natural gas, six per cent from wind farms and less than one per cent each from solar and bioenergy, according to the Ontario Ministry of Energy.

National Observer sought responses to the challenge from the NDP, Liberals and Progressive Conservatives. Only the Conservatives responded, saying that party leader Doug Ford believes climate change is real, but a cap-and-trade carbon tax is not the solution. The response did not include details of a proposed solution or a comment on the role for renewable energy.

“We all have a role when it comes to protecting the environment, and the Ontario PC party will do so while creating jobs and a stronger economy, and respecting the taxpayer,” party spokesman Simon Jefferies said in an emailed response. “We are going to protect the environment and our climate without making people choose between heating and eating.”

Ford has proposed to scrap the ‘cap-and-trade’ scheme implemented by the Liberal government of Kathleen Wynne and to reduce a fuel excise on gasoline and diesel that he says will save drivers 10 cents per litre at the pump.

The Greens’ Schreiner said the low-carbon economy is a $6 billion global opportunity, and that if Ontario were able to get one per cent of that it would be bigger GDP contributor than the province’s auto sector.

“This is a goal that not only benefits our environment, but it’s essential to our economy,” he said.

It is rather unbelievable in

It is rather unbelievable in this day and age that Schreiner and the Green Party are alone in seeing what needs to be done and fast to avoid climate catastrophe. And the more the deniers speak up, the more blind people become to the costly climate changes all around them. When you bury your head in the sand, there are other parts of your anatomy that whupped.