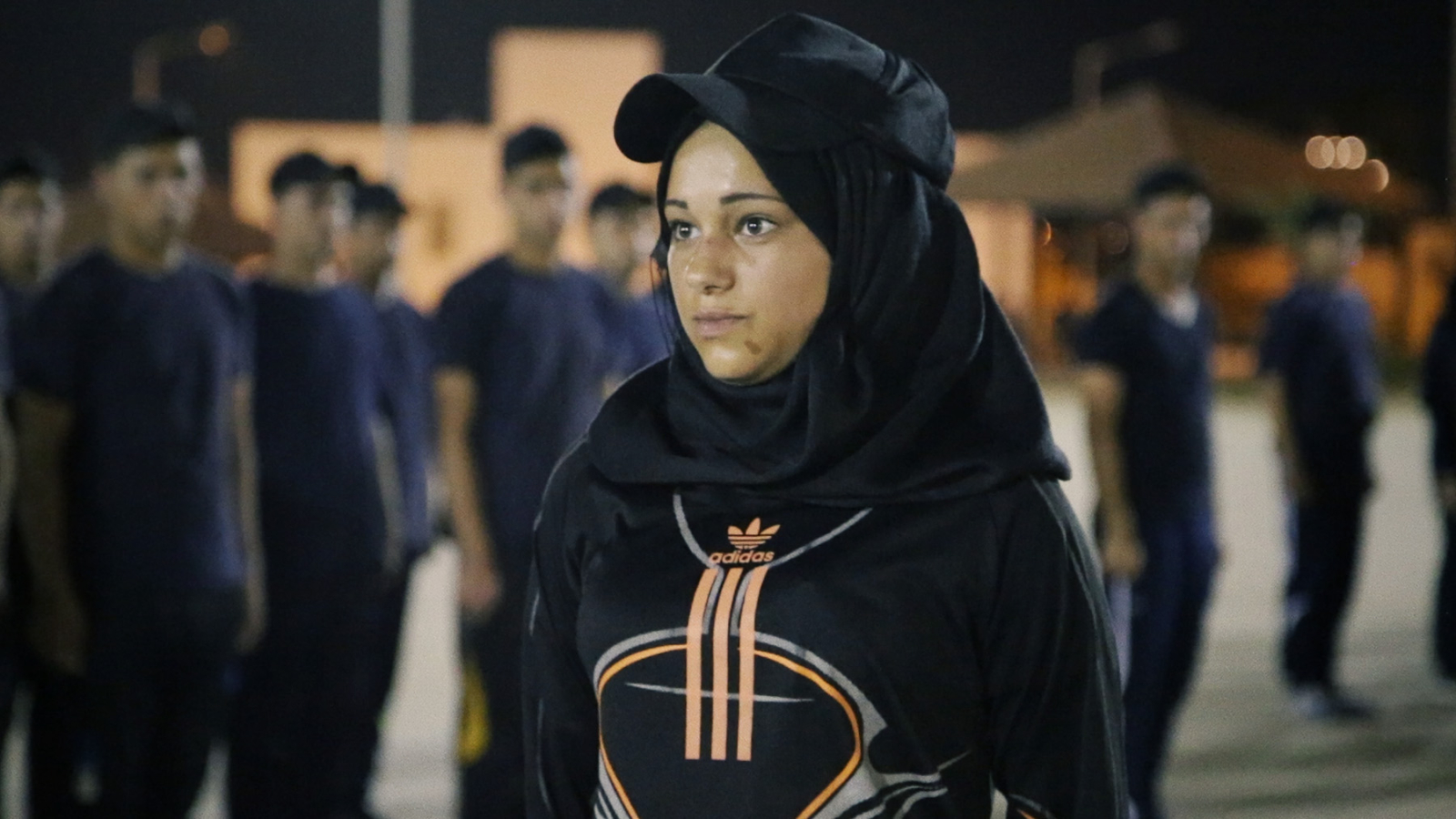 Over the course of his life, Waël Kabbani has often heard the same line from an array of people, in varying degrees, describing his looks or personality.

“You’re very different from what I expected for an Arab," they say when they meet him.

Kabbani, a fair-skinned, soft spoken man in his late forties, is the type who exchanges pleasantries with everyone. His English is impeccable and he’s fluent in Arabic, French and Spanish.

He was born to Muslim parents in Syria and raised in Saudi Arabia. He studied in a prestigious boarding school in Switzerland. In his early twenties, Kabbani lived in California and he now calls Montreal home.

Although Kabbani does not subscribe to any organized religion, he has found himself defending Muslims in the last few years, responding to an increase in hate crimes and Islamophobia in Canada, the United States and Europe. He does so by making powerful documentary films that tackle deep social issues, produced by his company, Iambic Dream.

“I believe that those who choose to practice an organized religion, whether it be Judaism, Christianity, Islam, or another religion, as long as they don’t try to force it on me, should have the right to do so without fear or prejudice,” Kabbani said in an interview in his home in Westmount, an affluent residential neighbourhood in Montreal.

When he sat down with National Observer, Kabbani wore a casual short-sleeved shirt with jeans. He looked as humble as he is worldly. What stands out most in his home are plush, brightly-coloured Indian pillows dotting two long sectional sofas in his living room and kitchen.

Kabbani is one of the executive producers behind What Walaa Wants, a coming-of-age story of a roguish teenager battling her own demons as she fights to get through police academy in the midst of the Palestinian conflict. The film won the Directors Guild of Canada special jury prize at the Hot Docs Film Festival earlier this month in Toronto.

Indeed, it’s not a typical portrait of the area, torn by the Israeli occupation for over half a century. The stakes are high for Walaa Khaled Fawzy Tanji, as she has to overcome her tumultuous environment in Balata, the largest refugee camp in Nablus. The documentary flies in the face of the stereotype of Muslim women being oppressed or submissive.

Shot over 10 visits to Palestine in five and a half years, it was important for film director Christy Garland to accurately portray the forces arrayed against Walaa. “A lot of these kids are very accustomed to soldiers coming in and knocking down their door, gun battle fights, teargas canisters — people in prison is a very normal thing,” she said. Garland wanted her audience to comprehend all these pressures so that it is understood that Palestinians are not simply violent people.

What Walaa Wants is a coming-of-age story of a mischievous teenager battling her own demons as she fights to get through police academy in the midst of the Palestinian conflict, produced by @WaelKabbani88 of @iambicdream #hotdocs #endIslamophobia

Garland first discovered Walaa when her mother Latifa was recently released from prison after serving an eight-year sentence for assisting a suicide bomber. She was part of a historic agreement releasing more than 1,000 Palestinian prisoners in exchange for one Israeli prisoner. She immediately saw a story within their relationship, as Walaa grew up mostly without her mother.

Garland was immediately drawn to Walaa at a Game Girl Workshop, an organization that aims to get more young women in the tech industries by building computer games based on their own stories. She was scouting for a compelling character for her next documentary.

“She was a bundle of energy, very funny, very boisterous and charismatic. But she also had a little bit of a chip on her shoulder, I mean she's tough as well. The other girls were either laughing at her or a little bit afraid of her. They love her but she can be a complicated personality. And I just wondered what was going to happen with her and what she wanted out of her life,” Garland said.

Indeed, Garland’s cinema vérité style depicts Walaa’s multi-faceted personality. Scenes at boot camp show how the girls seem to tremble around Walaa, notably when she gets the whole female troop in trouble after she pretends to faint from exhaustion to avoid work. But they also gravitate toward her and share tender moments of resting and cuddling one another after a day’s hard work.

Garland captures the nuances within the mother-daughter relationship. For example, Walaa admits with a grin on her face that she’s “not always” proud of her mom having been locked up in an Israeli jail. Later in the film, when she comes home from boot camp, there is an instance where she calls her mother by her first name and orders her to wash her clothes.

Garland also addresses the Western stereotype that Muslim women who wear a hijab are oppressed. Walaa, her mother and sister are often seen not wearing the headdress when at home or among friends or family. But Walaa does wear it at police academy, where there are some women who also choose not to sport it during training.

Garland said it was intentional that the women appeared with and without their hijab. “Their (Walaa and her family’s) resistance to the occupation is absolutely not based in any way on religion. They are not what the right-wing orthodox Israeli politicians classify as Hamas-affiliated extremists. They are not crazy jihadists — not at all. Latifa’s collaboration with the suicide bomber was the act of a Palestinian soldier, fighting for her country, in a war, and not related to religion in any way. So the question of their indifference to the hijab is a good and important one,” she said.

It is obvious that Walaa inherited a mischievous attitude from her mother, who’s often smoking a cigarette and appearing to be a woman of few words.

Walaa’s rebellious nature is most poignant when she’s training at boot camp. “You know I’ll crack that attitude of yours,” a sergeant tells her. “Yea, we’ll see,” she quickly replies.

Asked if her attitude was a bit of a performance, Walaa said she barely even noticed the camera because of Garland’s fly-on-the-wall style of filmmaking. She recorded both image and sound on her own, with only her interpreter, Ekram Zubaydi with her.

In the film, Walaa repetitively said she dreamed of being a woman who wields a gun and does not rely on a husband for income. When Kabbani translates a question about her next goal, she quickly responds, “General!” Her ultimate goal is to be a top-ranking security official. According to Israel's Haaretz, newspaper, women make up only three percent of about 30,000 Palestinian police and other security forces in the West Bank as of 2014.

After the interview, Kabbani notes how Walaa speaks as if she’s years ahead of her time — that she’s headstrong and bold, but not in a boastful way. He said she spoke with the same aura of confidence after the screening of What Walaa Wants at Hot Docs, when she appeared via video chat to the audience.

On being different and strong-willed

Kabbani said he can relate to Walaa’s dogged determination, having grown up in the Middle East in the '70s. “Being someone who was into music, film and animation, it wasn't something that was really encouraged," he said. "You really needed to be a strong personality like Walaa. Some members of her family weren't really excited about her wanting to join the police academy."

So far, half of the films that Kabbani has produced and released are about Palestine. Open Bethlehem is both a film and a call to action to save the city from enclosure by cement blocks and a wall, essentially alienating the Palestinians who live within it. One important theme of this film for Kabbani was how it portrayed the town as a model for a multi-faith city in the Middle East.

“Most people don’t know that Bethlehem is in Palestine. And Palestinians are not just Muslim. They’re [also] Christian, and coexisted for many years with their Jewish neighbours. Bethlehem is primarily a Christian community,” he explained.

This is exemplified in the film when the bell ringer for the church waits for the call to prayers for the mosque to finish before he strikes the instrument, he said.

The nuances in What Walaa Wants and Open Bethlehem are crucial to Kabbani. As a Syrian, he said he’s often asked to support a film about the conflict of his birthplace. But he said he has yet to find one that isn’t black and white, that truly presents the complicated nature of both sides of the civil war, of the rebellion against President Bashar al-Assad, which started out peacefully, and the government’s deadly crackdown on dissidents.

Kabbani said that whether or not one believes in the current Syrian government, he believes that one thing most Syrians — and Arabs for that matter — agree on, is that everyone is against Western interference.

Another documentary Kabbani produced, We Are Many, is about just that. It highlights the largest demonstration in history, which was a worldwide protest against the U.S. invasion of Iraq in 2003.

We Are Many and Open Bethlehem are films that advocate peace. Another of Kabbani's films, Life is Sacred, is about Colombian presidential candidate Antanas Mockus's movement to reverse the country’s vicious cycle of violence and end the drug cartel.

A lot of Kabbani's work can be traced back to his own experiences, which have turned him into someone who champions the underdog.

He said this has allowed him to relate to marginalized people and their struggles.

“I felt growing up that I was very different," he said. "I also happen to be gay. I think we all have closets. We all need help to overcome our challenges."

Their creative powers turned their experiences from war into a film