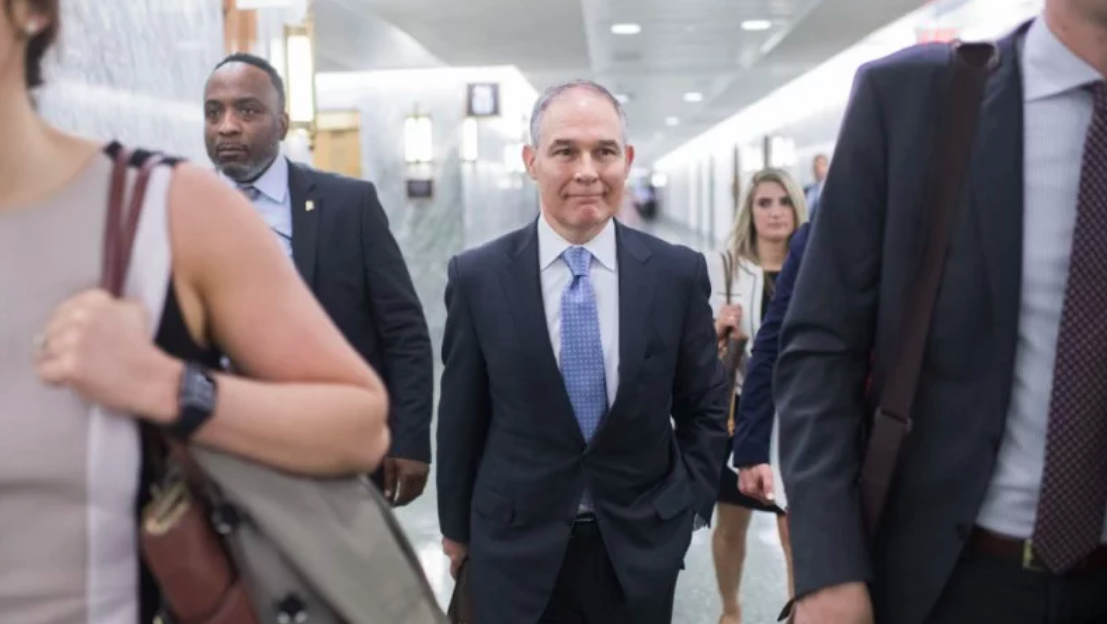 Internal records from the Environmental Protection Agency reveal the agency had hired a Republican firm last December to “directly support” Administrator Scott Pruitt and senior EPA officials with “an aggressive style of campaign-style” media monitoring. The EPA wanted the firm to focus on national outlets, a number of right-wing outlets, and media coverage in Pruitt’s home state of Oklahoma.

In December, EPA Administrator Scott Pruitt approved a $120,000 no-bid contract with the Republican opposition research firm Definers Corp., which is part of an overtly partisan America Rising network founded by longtime Republican operatives Matt Rhoades and Joe Pounder. The contract was short-lived. It was mutually canceled by the EPA and Definers a few days after Mother Jones first exposed its existence and more details emerged about the firm’s efforts on researching EPA career employees who spoke out against their boss, Pruitt.

Records obtained by the Project on Government Oversight (POGO) in a Freedom of Information Act request provide more details on the justification the EPA used to approve the contract without soliciting competitive bids, and what services it had hoped the firm would provide. The records seem to contradict the EPA’s defense that the firm was only offering a basic service to provide media clips.

According to the arrangement with Definers, the news clippings service would at a minimum have included real-time monitoring of a set list of publications that included the Tulsa and Oklahoma City papers, as well as conservative outlets like the Daily Caller, Breitbart Media, the conservative blog Hot Air, the Trump-friendly Independent Journal Review, and the website PJ Media. It also included the NTK Network, a conservative website that runs un-bylined content and shares overlapping staff and offices with Definers Corp. and America Rising. Pruitt’s EPA has been particularly responsive to the press coverage from these kinds of outlets. The agency has amplified any positive Pruitt coverage from the EPA accounts and has granted exclusive interviews to Breitbart and radio host Hugh Hewitt(whose son works in the EPA’s public affairs office).

Meanwhile, Pruitt’s press team has lashed out at reporters at various outlets like theNew York Timesand the Associated Press. The EPA’s contentious relationship with the press came to a head this week when an EPA guard grabbed an AP reporter by the shoulders and shoved her out of the building when she arrived for a national summit on contaminants in water. The agency also barred other reporters from the two-day event. Following the backlash, the EPA opened the event to the press when Pruitt’s address was over, though on Wednesday they were back to closed-door sessions, barring reporters from the building again.

The recently released records also indicate the EPA’s special interest in how Pruitt is portrayed in Oklahoma. Pruitt has been seen as a possible contender to succeed Oklahoma Republican Sen. James Inhofe, who is up for re-election in 2020.

The EPA has maintained that Definers offered services that were cheaper than other vendors. In response to a request for comment Wednesday evening, EPA spokesman Jahan Wilcox emailed Mother Jones: “The Definers contract was for news clip compilation. The contract award was handled through the EPA Office of Acquisition Management and was $87,000 cheaper than our previous media monitoring vendor while offering 24-7 news alerts once a story goes public.”

But in the documents, the EPA justified soliciting the contract from a single source because they say it was the only service capable of providing what the EPA needed. “The EPA team can be automatically notified that allows the Office of Administrator extensive media monitoring with a product that is an aggressive style of campaign-style delivery of real-time coverage.” A form completed by the Office of Public Affairs suggests the EPA considers press coverage of Pruitt’s work to be filled with inaccuracies:

“…OPA works to achieve articles that accurately represent EPA’s perspective. In order to accomplish this goal, OPA must constantly monitor media coverage and respond to inaccurate or incomplete stories. OPA may choose a number of methods to address these stories, including contacting reporters and editors to request corrections. OPA’s ability to successfully address inaccurate or incomplete before the stories influences other reporters or are widely read is largely dependent on its ability to identify these stories shortly after publication…”

“The EPA had a very weak claim for awarding this contract on a no-bid basis,” said POGO’s director of investigations Nick Schwellenbach, who obtained the documents using a FOIA request. “The EPA relied solely on information provided by Definers to determine whether the cost was ‘fair and reasonable.’ They should have engaged in market research, i.e., learning what others are charging for comparable services, at a minimum.”