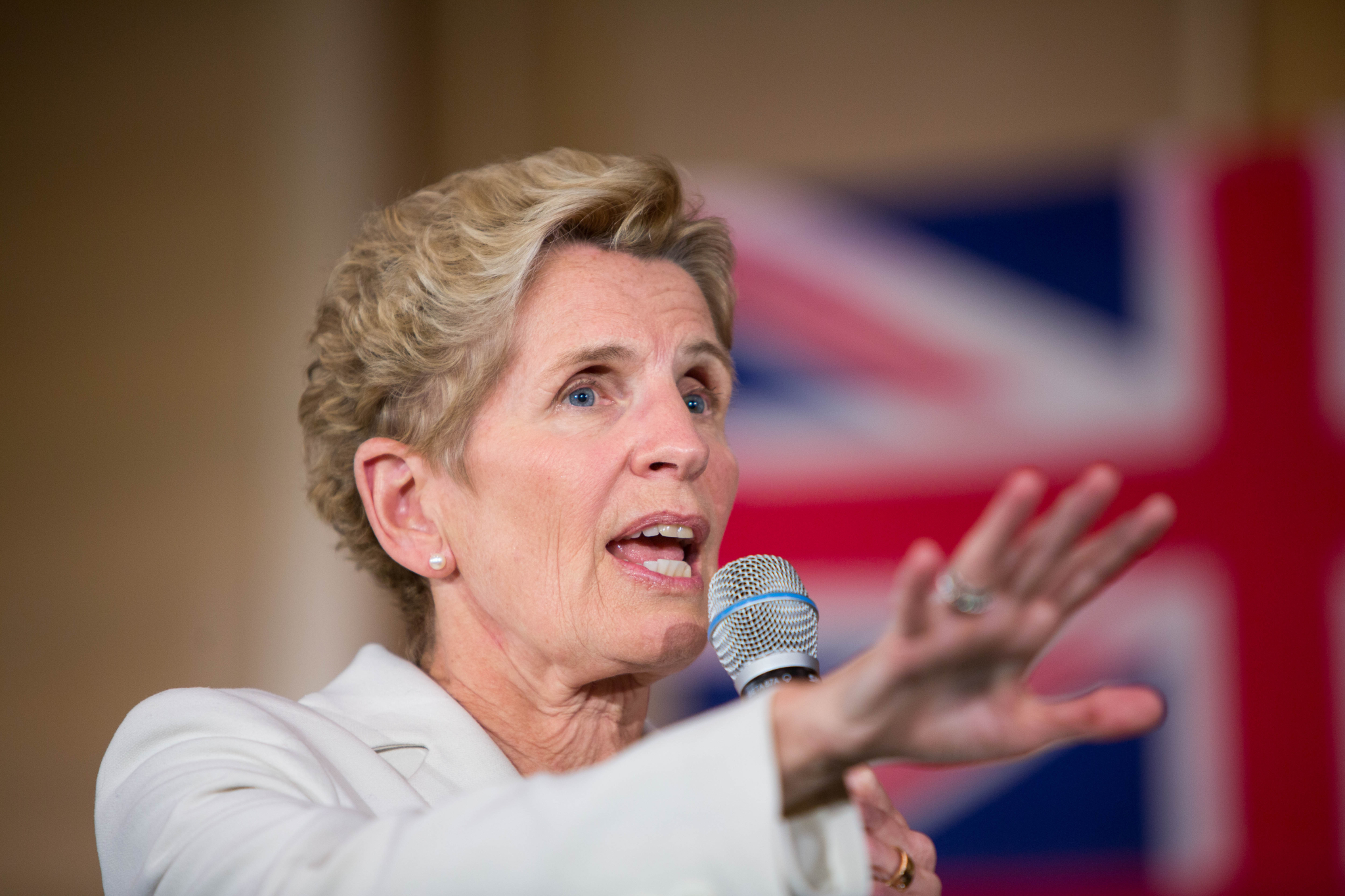 Leaders of Ontario's three biggest political parties served up an often testy debate on Sunday night as Liberal Leader Kathleen Wynne sought to defend her record in government against two contenders fighting tooth and nail to replace her as premier.

With New Democratic Party leader Andrea Horwath consistently cutting off her rivals and Progressive Conservative leader Doug Ford relying on simplistic slogans in the absence of policy depth, Wynne made a concerted effort to paint herself as the politician most able to balance the conflicting needs and wants of the province’s electorate.

But it remains to be seen if her performance was enough to lift her fortunes, with latest polling data giving Horwath’s NDP on average of 36 per cent support and the PC’s Ford 35.9 per cent, according to the CBC Poll Tracker, which aggregates all publicly available polling data. The governing Liberals of Wynne are trailing at 21 percent, while the Greens have 5.5 percent.

In terms of seat projections, the Conservatives are still most likely to have the chance to form government after the June 7 vote, with 70 of the 124 ridings going their way, according to the CBC’s tracker.

With the moderators, Steve Paikin from TVO and Farrah Nasser from Global News, struggling to get the audience not to applaud at the soundbites they most liked throughout the 90-minute debate, much of the debate focused on healthcare, childcare, Hydro One and the economy.

Meanwhile Ford, who has promised to cut $6 billion a year from Ontario’s budget but has not said how he plans to do so, again failed to explain what cuts he would make to government services or how deep a deficit he would sink to do so.

At one point while Doug Ford was promising an economic wonderland, Andrea Horwath interrupted him. “You wouldn’t buy a used car without looking under the hood, why should anyone buy your plan without seeing it?” she asked. #onpoli

'You wouldn't buy a used car without looking under the hood,' Horwath said

At another point while Ford was promising an economic wonderland, Horwath interrupted him. “You wouldn’t buy a used car without looking under the hood, why should anyone buy your plan without seeing it?” she asked.

Ford, who claimed that scores of businesspeople and doctors across the province say he is the only one who can be trusted to run Ontario, was given a rebuke on that point from one medical professional.

“I am an #OntarioDoctor and I believe politicians should work hard to earn my support before assuming I support them. I also respect my patients enough to know they can make informed choices on who to support,” Dr Javeed Sukhera wrote on Twitter.

I am an #OntarioDoctor and I believe politicians should work hard to earn my support before assuming I support them. I also respect my patients enough to know they can make informed choices on who to support. #onpoli @TheAgenda #ONElxn

Ford asked if he believes in global warming

Ford was later asked by a member of the audience whether he believes in global warming, and if so what concrete proposals he has to tackle it. He didn’t provide any detail on how his government might keep emissions in check and that he opposes measures that help to reduce CO2 emissions, including a carbon tax and the cap and trade scheme currently in place in Ontario.

“I actually believe in man-made global warming,” he said. “But what I don’t believe in, my friends, is putting an artificial tax called a carbon tax, cap and trade, that does absolutely nothing to help the environment.”

Wynne defended the cap and trade scheme, saying “it tackles climate change, reduces pollution, and it actually puts the onus on the people who are producing that pollution to pay.”

Green Party leader Mike Schreiner, who has been kept out of the leadership debates on the basis that his party does not currently have a seat at Queen’s Park, said at an ‘Infiltrate the Debate’ event in the Guelph riding whose seat he is seeking that Ford’s “understanding of carbon pricing is absurd.”

One of the most rancorous part of the debate occurred after Wynne asked Horwath if she really understood what it meant to guarantee that an NDP government would not use back-to-work legislation against public sector unions.

Referencing the NDP’s recent blocking of such legislation to get staff at York University back to school, Wynne said Horwath “would put Ontario permanently on strike or you’d empty the public purse to pay off huge union demands.”

Horwath responded that she would prevent such disputes from arising in the first place, saying that when the government creates “precarious work in their workplace, then you’re going to end up in labour disputes.”

ABmT (anyone but mini-Trump). Just don't split the vote, Ontario, and let the wrong one in. Wynn is not liked and has failed at governing for social democracy, so give the dippers a chance please.

Wynne has already become the

Wynne has already become the spoiler candidate. I bet Trudeau is part of the reason she's a spoiler.

Even if "mini-Trump" does get in, he's only going to hurt the corporate bottom line, and it wouldn't surprise me if the corporate ones are backing Wynne to try and hold off an NDP majority.

It's not at all surprising

It's not at all surprising that the party leaders are reluctant to disclose their ideas about the economy and the climate crisis. Neither they, nor the public, nor commentators have any responsibly informed ideas about what's going on in an increasingly complex world.

He readily admits he doesn't know what the future will be, but he doesn't hesitate to point out 4 startling things that are NOT likely to happen: 1) Growing the economy AND mitigating climate change: 2) Growing the economy by REPLACING fossil fuels with renewables; 3) Humans en masse choosing to leave oil, coal, and natural gas in the ground; and 4) Governments explaining ideas like his before the limits to growth are well past.

Consequently, our species is an out-of-control, energy-hungry, global Superorganism in the service of maximizing GDP growth.

Although there are some big-picture voices out there, they have difficulty competing with mainstream media for the public’s attention. Moreover, big-picture messages are typically multi-faceted, complex and loaded with graphs and numerical data, posing a considerable cognitive challenge for a distracted public with other, more pressing matters on their minds.

To find out more Hagens, start here:
"For 90% of people in the developed world, income growth ended a decade ago — Nate Hagens (1/5)" : Growing the economy is incompatible with mitigating climate change, despite what Trudeau keeps saying. Shortlink: https://wp.me/pO0No-4iA