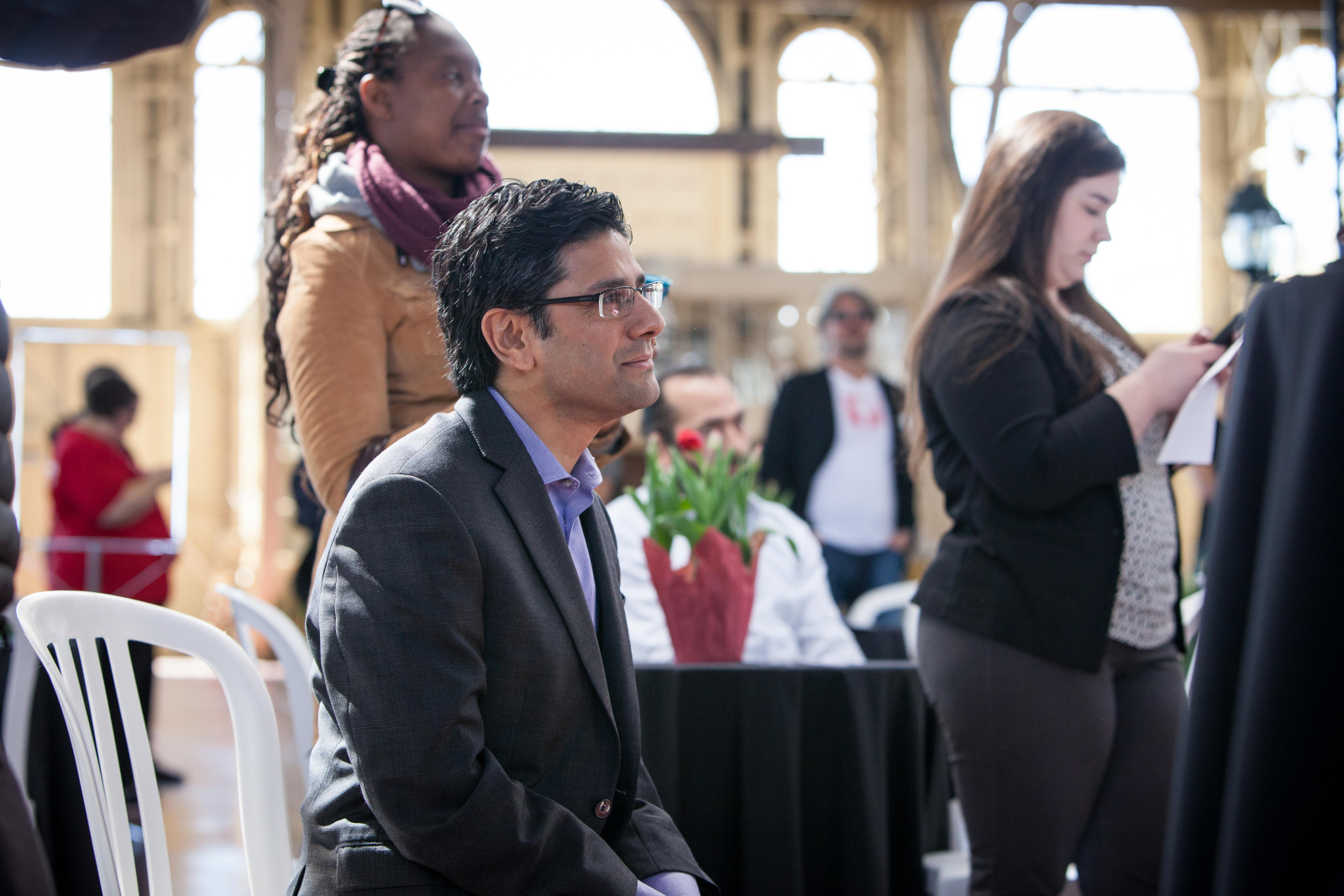 Yasir Naqvi is running for re-election in what's widely considered a Liberal safe seat, but he says he's never seen so much uncertainty among voters at the door who tell him they're still weighing their options.

Ottawa Centre is a prominent riding that encompasses most of the downtown core, with voters who tend to be progressive and politically astute. It's a mix of high-rises, lower-income neighbourhoods and some tony districts. Over the last 40 years it has flipped between the Liberals and New Democrats.

It could be a bellwether and flip again as the campaign for the June 7 provincial election appears more and more to be a duel between the Progressive Conservatives and the NDP after 15 years of Liberal governments.

Naqvi, the province's attorney general, seems well liked and has held the riding since 2007, winning each time with a bigger margin over his NDP opponent. But he sees a lot of hesitation this time.

Many residents say they have already made up their minds and will vote NDP because they refuse to support either Progressive Conservative leader Doug Ford or Liberal Premier Kathleen Wynne.

Usually in Ottawa Centre when people vote strategically "it tends to be to stop the Conservatives — there's always a group of people," said Naqvi during an interview at his campaign office.

That may have helped the Liberals in the past. It may hurt them now.

With just over a week left until the election, polls suggest the NDP is gaining momentum and could form government. Encouraged by her strong performance in the final televised debate Sunday night, NDP Leader Andrea Horwath started the week Monday morning with a campaign event in Etobicoke North — Ford's own riding, while Wynne stayed in Toronto — a Liberal support base.

Despite the uncertainty, Naqvi is a strong campaigner. On a sunny weekday afternoon, he and his team flew through a large apartment building, mainly filled with seniors, in about an hour. His people speak multiple languages and move fast, with Naqvi running from one door to the next to greet voters who, for the most part, know him.

Some said he had their support immediately, others were wary and waffling. One voter told him, "I know you—you're the minister of justice. Kind of a star." But he wouldn't commit to vote Liberal.

Naqvi is also getting help from federal Liberal heavyweights. Last week, Environment Minister Catherine McKenna, who represents the riding federally, and Marco Mendicino, parliamentary secretary to the federal justice minister, canvassed with him.

Many voters in the riding say they are voting NDP to stop Ford — but there's also a sentiment against Wynne.

"Generally, I have voted Liberal throughout my entire voting," said Colin Francey, 25, who stopped to offer up his opinion of Ford and Wynne. "I'm a pretty staunch anti-conservative, especially now that Doug Ford's running. It's just not my cup of tea."

Francey said he will vote for NDP candidate Joel Harden, primarily to ensure that Ford is not elected; but also because he's tired of Wynne.

Christian Martinez, 33, is voting for Harden for similar reasons.

"The core of my reason is to ensure that the Liberal party is not in power anymore and I merely have more trust in—I can't believe I'm saying this—in the NDP than the Conservatives at this point," he said.

Next to him on the park bench, Martinez's friend Luke Ciesielski explained that Ford is just not an alternative to Wynne because he's a demagogue and fear mongers. He said Ford could divide Ontario "even further." He's casting about for solutions, looking for something positive on education and health care.

As for Harden, an academic and social justice advocate, he can feel a profound change coming as Liberal voters move to his party.

"We've told them we're really proud to earn their respect in this moment and as much as they don't think of themselves as NDPers, they certainly don't want Doug Ford as premier."

"The strategic vote is for us," he said, saying even Liberal voters have legitimate criticisms of Wynne.

Despite his ability to attract Liberal votes, Harden's political views contrast on many fronts to Naqvi's. Harden, a self-identified socialist, wrote a book on grassroots movements and recently campaigned against the Energy East pipeline.

Harden's approach to the campaign is also markedly different from Naqvi's — the signs that plaster his office are hand-drawn and he canvasses at a glacial pace.

Both offices had a lot more hustle and bustle than Progressive Conservative candidate Colleen McCleery. The Tories have never won the riding since it was created 50 years ago.

"I think Yasir has his hands full with both Colleen and the NDP candidate ... I feel he's in trouble, and he should be," said Syversen.