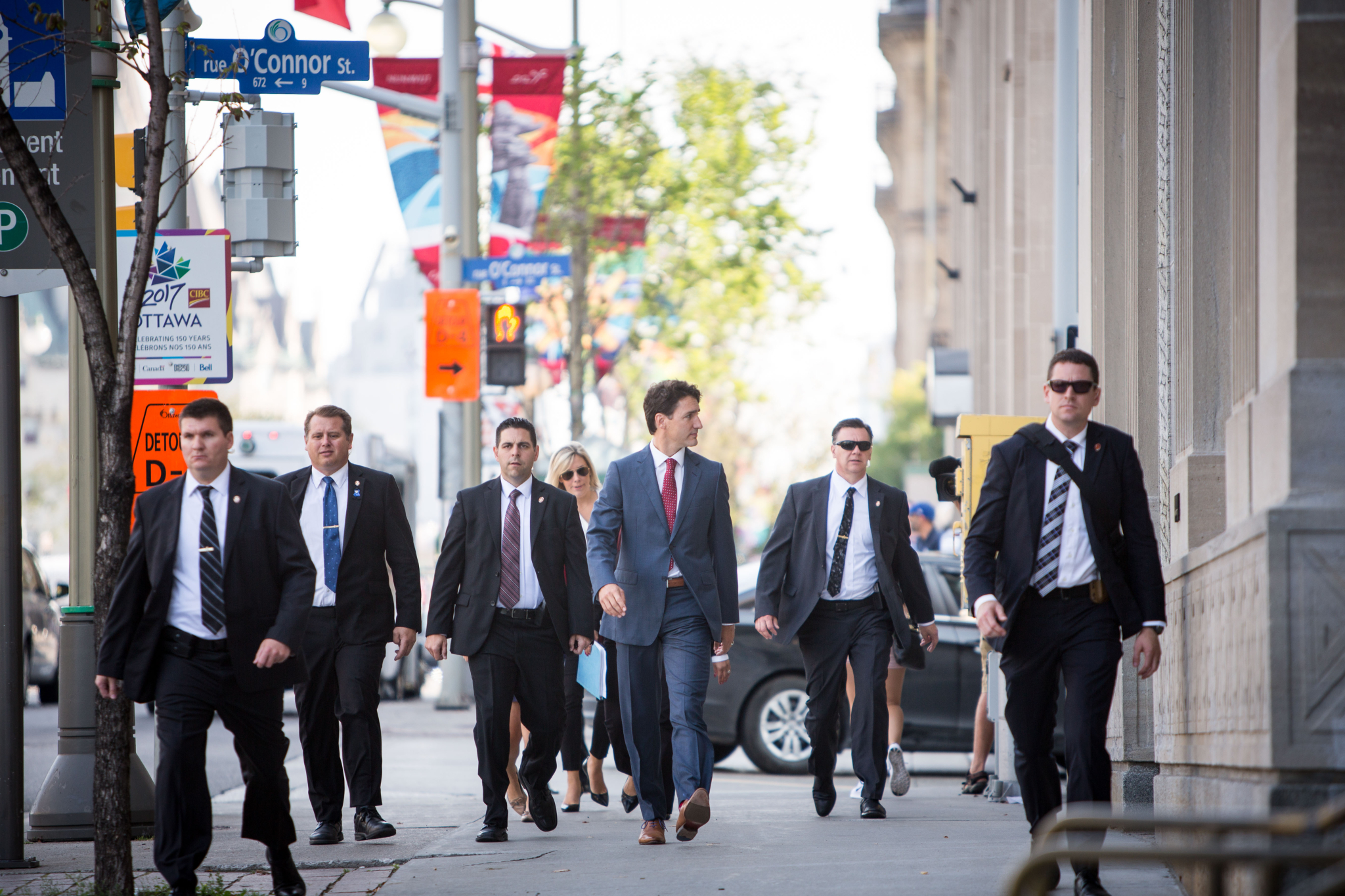 Prime Minister Justin Trudeau says his cabinet made a decision to use $4.5 billion of taxpayers' money to buy Kinder Morgan’s Trans Mountain pipeline and its troubled expansion project after the company told his government that the project was a "risky" investment.

“The project became too risky for a commercial entity to go forward with it; that’s what Kinder Morgan told us,” Trudeau said during an interview with Bloomberg on Tuesday. "We are going to ensure that it gets built so that we can get our resources to new markets.”

The stunning move announced early on Tuesday morning provoked criticism from environmentalists, Indigenous leaders and opposition politicians as well as defiance from British Columbia, but was praised by Alberta Premier Rachel Notley, some industry and labour unions.

The deal came on the eve of a May 31 deadline, set by the Texas-based company, which was threatening to pull out of the project if it failed to find ways to mitigate its risks.

Opponents say the investment is a bad one in a global economy that is moving away from oil and other fossil fuels. Before Trudeau's government announced its decision, one company, B.C.-based Nature's Path, made a point of launching a campaign against the Trans Mountain project, urging the government instead to invest in renewable energy and jobs of the future.

But in Alberta, Notley saw the move as good news. She said she no longer sees a need to turn off the oil taps to British Columbia, as threatened in a recent Alberta government bill, because the Trudeau government decision has created more certainty around the project than there has ever been.

“Because the crisis has passed, at least for now...I don’t know that we’re going to be looking to exercise this (legislation) in the very near future,” Notley said as beaming cabinet ministers stood behind her.

“Pick up those tools, folks. We have a pipeline to build."

Robert Blakely, chief Canadian officer of Canada's Building Trades Unions, said the Trudeau government had "stepped up" for one of the country's major industries.

“A government that promised to end fossil fuel subsidies and to champion the clean economy should not be spending billions of dollars of taxpayer money to buy out a fossil fuel expansion project," said BC Green leader Andrew Weaver.

"This is a nation building exercise of the highest order," said Blakely. "It parallels the recent bailout of the auto industry, the railways, the first Trans-Canada Pipeline and other such undertakings."

The government of Alberta also deserves praise, he said. "It is worthy of note that the present Alberta government has put the interest of its citizens beyond the interest of their political ideological 'partners', that stance takes great conviction and strong resolute leadership."

Chris Bloomer, president and CEO of the Canadian Energy Pipeline Association, said in a statement that the association is pleased the project will be built. But he also expressed concern that the federal government had to step in, and what that means for future projects.

"We do not believe that this outcome will instill investor confidence in Canada," said Bloomer.

B.C. Premier John Horgan remained firmly opposed to the project for fear of a catastrophic spill. He said his government will proceed with its reference case to the B.C. Court of Appeal, that would establish provincial authority over what can be transported through the province.

"It does change it from a federally approved project to a federally undertaken project, but the reference case...did not speak to a specific project," he explained. "It spoke to the transportation of diluted bitumen through British Columbia by rail or by pipe. So our reference case remains."

The B.C. government's opposition to the pipeline project was the prime reason Kinder Morgan said it would likely pull out of the project if it did not have assurances before the self-imposed May 31 deadline.

Dozens of conditions imposed by the National Energy Board must still be met before construction can proceed. The project also faces a legal challenge launched by several First Nations at the Federal Court of Appeal. They say that Trudeau's 2016 decision to approve the pipeline should be reversed since the government failed in its legal duty to consult them in a meaningful way, as required by the Constitution.

Some of them have also asked the court to reopen its evidentiary record and consider new records and other evidence uncovered by a recent investigation by National Observer that revealed public servants were instructed in October 2016 to find a way to approve the project while the government was still consulting the affected First Nations. The court is considering their request.

Prime Minister Justin Trudeau's office issued a statement saying that he had spoken separately with Notley and Horgan.

It said the prime minister "expressed appreciation" for Notley's support for the project. The two leaders also agreed to continue working to fight climate change and protect the environment.

To Horgan, Trudeau "reiterated the federal government’s jurisdiction over interprovincial pipelines," but also "reaffirmed his commitment to work collaboratively" with the province on environmental issues.

Grand Chief Stewart Phillip, president of the Union of B.C. Indian Chiefs, said he was "shocked and appalled that Canada is willingly investing taxpayers’ money in such a highly controversial fossil fuel expansion project so risky that a major resource company has walked away and there are no known buyers lined up."

"Trudeau and his Liberal government were elected on their commitments to protect the environment and to respect and uphold Indigenous rights. Choosing to buy the pipeline is a direct contradiction of these commitments and is not in the national interest," added union vice president Chief Bob Chamberlin.

Former U.S. Vice President Al Gore took to Twitter to denounce the purchase as a subsidy to fossil fuels.

Fossil fuels are subsidized 38x more than renewables globally. Now the Canadian government wants to spend billions more of taxpayer dollars to increase its country’s contribution to the climate crisis. This is not in the public interest. We must keep fighting to #StopKM.

Kinder Morgan 'laughing all the way to the bank'

Greenpeace Canada sent a statement to supporters saying that Prime Minister Justin Trudeau was "gambling billions of Canadian taxpayer dollars on an oil project that will never be built."

A top executive at Greenpeace International said earlier this month it was “irresponsible” for Trudeau to offer to protect the project against financial loss.

“Kinder Morgan (is) laughing all the way to the bank,” tweeted Green Party of Canada leader Elizabeth May, who this week was fined $1,500 for her role in a recent protest against the pipeline, adding that Canada would need to raise more money now to build the $7.4 billion project.

The West Coast Environmental Law Association said it was "astounded" at the decision that it said would "nationalize" the pipeline project despite the financial risk, opposition and ongoing legal issues.

“It is shocking that the federal government is investing in a project that even the private sector won’t support, especially given the serious economic, reputational and legal risks involved," staff lawyer Eugene Kung said in a statement.

"It is unfair for Canadian taxpayers to prop up the federal government’s misguided attempts at keeping a dead-end project alive."

Independent economist Robyn Allan, who was an expert intervenor at the National Energy Board's Trans Mountain expansion hearing, pegged the true cost of the "bailout" in a tweet at between $15 billion and $20 billion.

The $4.5 billion was for existing assets, said Allan, but building the expansion would cost over $9 billion, with another $2.1 billion in financial assurances for diluted bitumen spills and the government's $1.5 billion Oceans Protection Plan.

Andrew Scheer, leader of the federal opposition Conservative Party, accused Trudeau of trying to buy his way out of a problem and said he has “emboldened protesters” and “people who have ignored the rule of law” by saying they’re obliged to grant social license before projects are allowed to go ahead.

“Today the prime minister is forcing Canadian taxpayers to pay for his failure,” Scheer told media on Parliament Hill, after the announcement by Finance Minister Bill Morneau and Natural Resources Minister Jim Carr.

Federal NDP leader Jagmeet Singh said regardless of who owned the pipeline infrastructure, questions will remain about the risks of a diluted bitumen spill, the protection of the coastline and whether First Nations were properly consulted.

But he said the deal demonstrated the “failure” of the “social license theory,” or the notion that “if we just sucked it up and punished consumers with a carbon tax” then opponents of pipelines would become cheerleaders.

“I hope that this fiscal Hail Mary pass works,” said Kenney. “The federal government killed Northern Gateway, they killed Energy East...this is a constellation of policies that have driven us to this point.”

(The Energy East pipeline project, proposed by Calgary-based TransCanada, stalled after a separate National Observer investigation revealed that a company representative, former Quebec premier Jean Charest met privately with members of the federal regulator who were reviewing the project, prompting mass recusals and a new review that imposed tougher conditions.)

Andrew Weaver, the leader of the B.C. Greens, called the latest federal move to buy Trans Mountain “a betrayal by a government who ran on a hopeful vision for a better future."

“A government that promised to end fossil fuel subsidies and to champion the clean economy should not be spending billions of dollars of taxpayer money to buy out a fossil fuel expansion project," said Weaver.

'The federal government has made a choice'

Horgan said the case was never about who owns the pipeline, but whether B.C. has the right to protect its environment from the impact of a bitumen spill, and Ottawa’s decision to buy the Trans Mountain pipeline does not reduce the risk.

The province is asking the Appeal Court whether it has the right to regulate the transportation of hazardous substances inside its borders. Horgan said the fact the pipeline is about to be owned by a federal Crown corporation doesn’t affect the case.

Horgan said the federal government’s decision to take over the project puts Ottawa in charge of managing every aspect of the pipeline, including its risks. "On this critical question, the federal government is completely accountable and I think at the end of the day that is probably a good thing," he added.

For portfolio manager Rafi Tahmazian at Canoe Financial, the federal government was hurt by both its perceived need to step in to get the pipeline built and its stated aim to sell it later.

“Now I’ve got a federal government that owns a big pipe, I’ve got my provincial government (in Alberta) who has legislated control over my oil leaving my province even, I feel a lot more like I live in Argentina today, or Russia, than I do in a G7 country.”

Tahmazian said Canoe manages around $1 billion of energy investments, the majority of which was outside of Canada, and he worried about the signal the decision sends to international investors looking at Canadian energy projects.

“The courts already have declared B.C.’s strategy null and void, they even want them to pay for the fees that were incurred, and yet our federal government has yet to show one ounce of muscle in this process,” he said.

Neither side thinks the sale makes it any more likely the project will get completed.

“I’m in the business of betting on that kind of stuff, and I have no reason to believe that they’re any closer to a solution,” Canoe’s Tahmazian said.

'No business to be done on a dead planet'