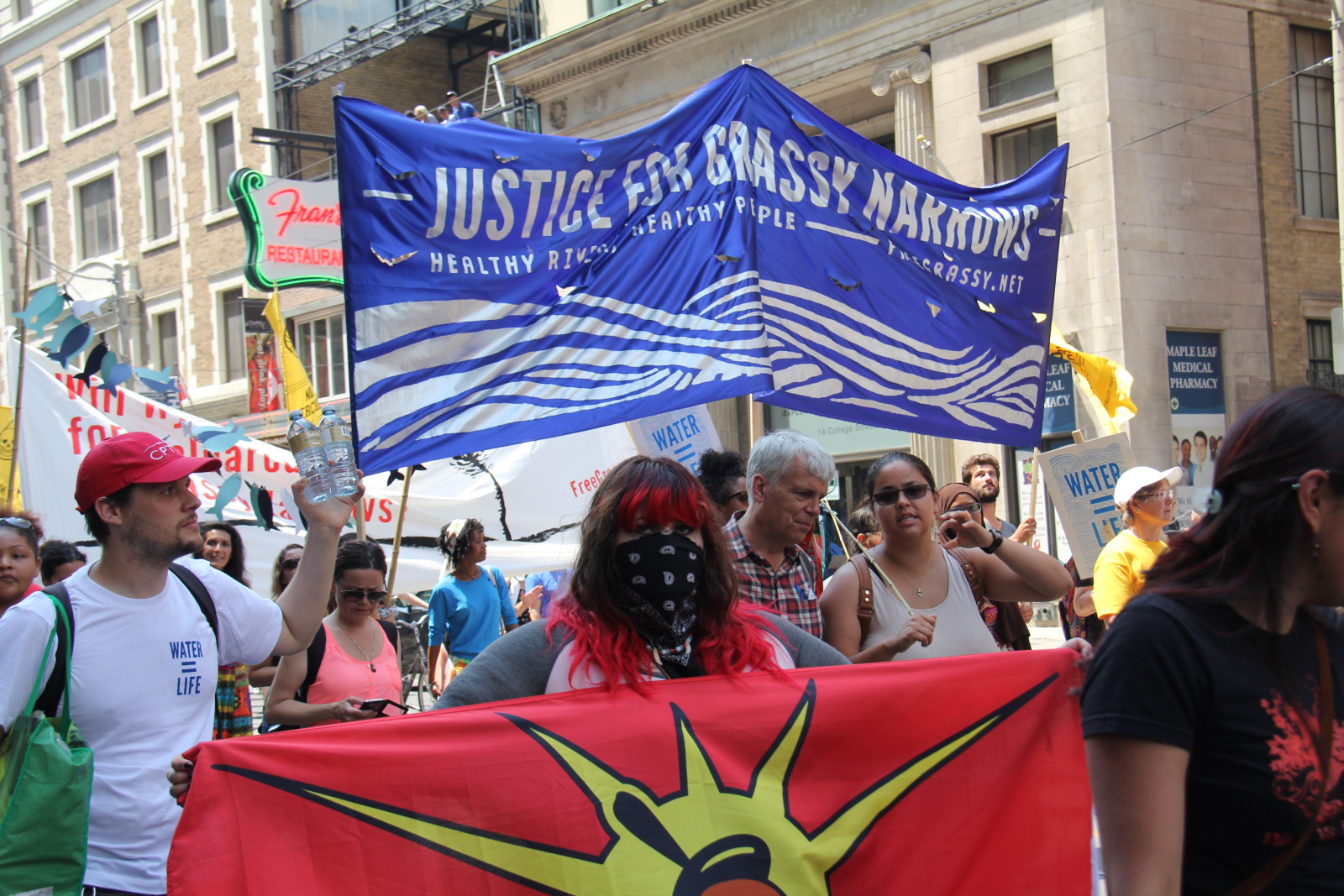 Members of the Grassy Narrows First Nation travelled to Toronto for the River Run on June 2, 2016, calling for Premier Kathleen Wynne to clean up mercury in the English-Wabigoon river system. Photo by Steph Wechsler
Previous story

If elected to form a government, the Progressive Conservative Party says it will clean up mercury contamination that has poisoned a Treaty Three First Nation in northwestern Ontario for more than 50 years. But it's just not telling voters going to the polls how it plans to do it.

Ontario's three political parties with seats in the provincial legislature have all made commitments to address the toxic watershed near the Grassy Narrows (Asabiinyashkosiwagong Nitam-Anishinaabeg) and Wabaseemoong First Nations during the election campaign.

For decades, Grassy Narrows had to deal with deadly toxins released by industry, as successive governments looked the other way. It's an issue that has persisted while all three parties, the PCs, the New Democrats and the Liberals, were in power.

They've all made different types of commitments to address the longstanding problems, but the details aren't always clear.

When asked for specifics surrounding PC Leader Doug Ford’s strategy for water remediation of the English-Wabigoon river system, the party declined to say.

“This has been an ongoing problem for decades and a failure of the government. Doug Ford is committed to cleaning up the mercury contamination as quickly as possible, and will work to ensure everyone receives high-quality care,” said spokesman Simon Jefferies in an email statement to National Observer.

'It's been a long time coming'

Grassy Narrows released an epidemiological study on May 24 that concluded the consistent mercury contamination over 50 years had created "considerably worse" health outcomes for community members.

"We’re still in this battle to have a good and fair compensation package for the community and to continue to clean up the environment," said Chief Rudy Turtle in a phone interview with National Observer. "It’s been a long time coming and it’s still going to take several years to have the environment back to normal. So we’re quite concerned, as you can tell. We’re very concerned with our environment and we would like to live a life where we don't have to worry about mercury or any other contaminants any more.”

He added that he has some concerns about the lack of details in the Tory platform.

“I don’t really know Doug Ford well enough to comment on him, but I know just from past experience with the PC Party as a whole, we're very nervous,” Chief Rudy Turtle told the National Observer in a phone interview.

Turtle says he’s impressed with the New Democratic Party leader, Andrea Horwath, who visited with him and members of the Grassy Narrows band council in May. Horwath has promised to fund a mercury treatment clinic and address compensation.

“The other two candidates haven’t approached me personally and haven’t said a word to me,” he said. “It kind of shows who really means business.”

Before the Reed Paper mill in Dryden, Ont. dumped 9,000 kilograms of mercury into the English-Wabigoon river in 1962, Grassy Narrows experienced high employment, between hunting, guiding, and a flourishing commercial fishery. Decades of poisoned water, clear-cutting, and bioaccumulation — which occurs when the toxin converts to a more active and chemically dangerous compound known as methylmercury —have created devastating economic and health impacts.

The effects of Minamata disease — a chronic illness caused by exposure to the high mercury concentrations — include significant impacts on mobility and vision.

“It's good that we're finally seeing the government now start to take action on it,” Green Party leader Mike Schreiner told National Observer. “But I want to make sure we rigorously keep pushing that the cleanup actually happens.

“The other three parties have, for the most part, dragged their feet way too long on this issue.”

Stakeholders have been critical of Wynne’s government in the past, notably after the premier claimed she was not aware of a study showing that the erstwhile strategy of “natural recovery” was not scientifically supported.

"We all agree that more needs to be done to help the people of Grassy Narrows, and Ontario Liberals have taken clear actions toward that end,” the Liberals told National Observer in a statement.

“That work starts with the river. We have been working with our partners to identify all contaminated sites and implement a comprehensive remediation plan, including the immediate investment of $85 million in dedicated, protected funding. Regardless of the election outcome, this funding will be there to make sure the scientists can do their work.

“Of greatest concern are the people of Grassy Narrows. We've committed more than $15 million in new funding over the next three years for current and future beneficiaries through the Mercury Disability Board. This builds on the $20 million already provided to families.

“We are committed to cleaning up the river and protecting the people of Grassy Narrows.”

The $85 million government investment is in a trust fund for the cleanup, so it wouldn't be affected by the election.

Dr. Faisal Moola — an associate professor in the department of geography at the University of Guelph who has consulted on water remediation with Premier Wynne — cites Grassy Narrows as a key example of what can happen when environmental policy isn’t prioritized.

“The social consequences of a degrading environment can be absolutely horrific,” said Moola.

“I have no confidence whatsoever that Doug Ford understands or cares about the importance of clean air, clean water, biodiversity, and ensuring the rights of Indigenous peoples that depend upon the health of the environment,” said Moola, who is also the former director general for Ontario at the David Suzuki Foundation.

While none of the three parties can claim they have a good track record regarding Grassy Narrows, Moola said whoever forms the next government can take immediate steps to address areas where Ontario has previously failed.

“We also have to address the wider social and economic consequences of this environmental disaster,” he said. “It’s not just an environmental problem, it’s also a justice problem.”

First Nation battles to save 50,000 hectares of forest from clear-cut logging

This situation is the result

This situation is the result of ignoring the Precautionary Principle - don't do anything if you can't prove it will be safe for the environment. It is a lesson we have yet to learn.