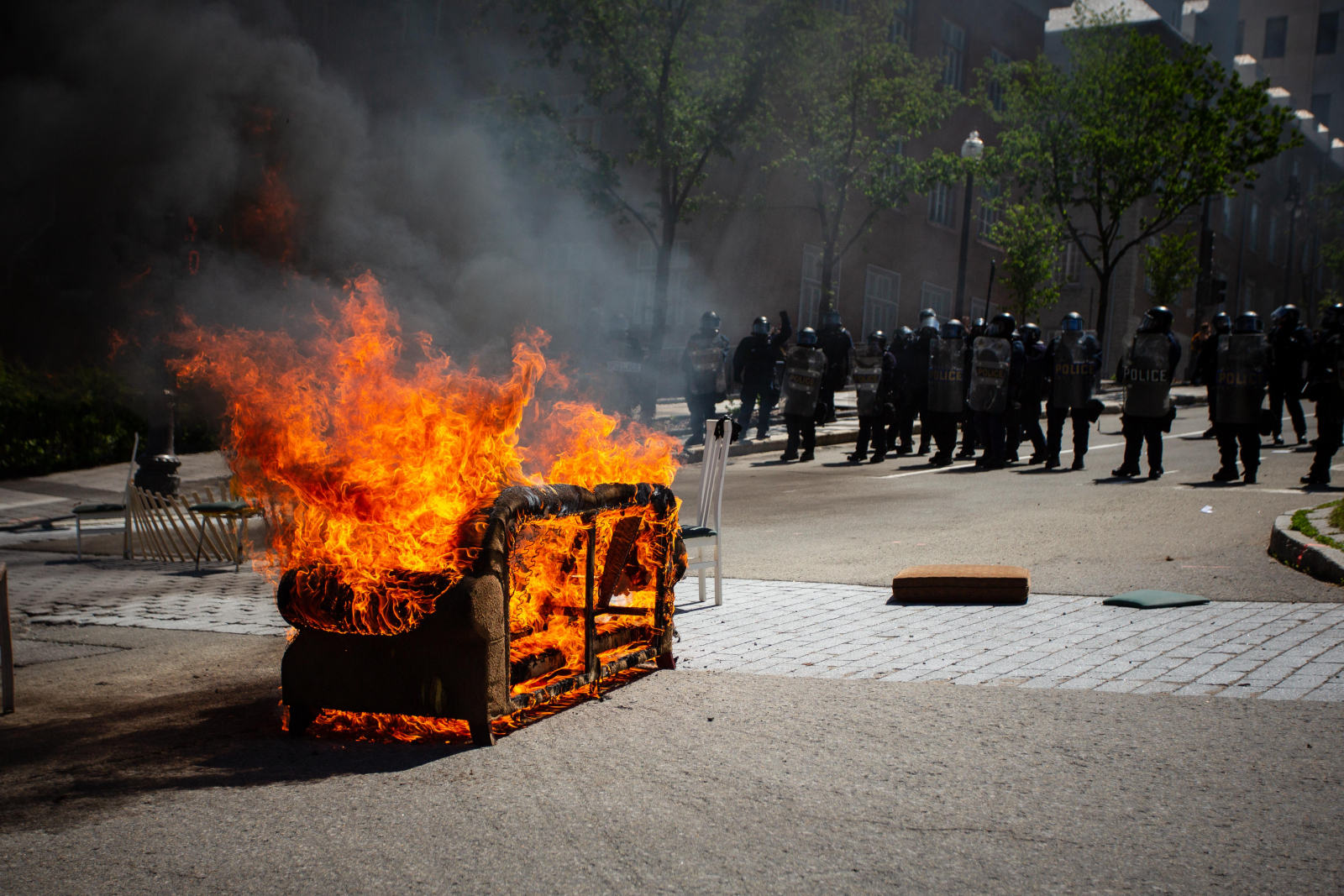 After a G7 protest was declared illegal by authorities, protesters set furniture on fire in the middle of an intersection close to Quebec City's downtown core before retreating, on June 8, 2018. Photo by Alex Tétreault
Previous story
Next story

The G7 is headed to an 11th hour negotiation to try and salvage the possibility of getting all of the leaders, including U.S. President Donald Trump, to agree on joint action for global progress, says Canada's foreign affairs minister.

Chrystia Freeland said G7 negotiators are still working to finalize the statement, known as a communiqué, almost halfway through the two-day summit hosted by Prime Minister Justin Trudeau in Quebec.

The countries are trying to agree on joint commitments to address a range of issues including international security, trade and environmental protection.

U.S. President Donald Trump has said he will leave the summit early, which has seemed to put many at the international meeting on edge as to whether a statement could be achieved in time.

"We'll see," said Freeland to media on Friday afternoon, about where the G7 would land in terms of a final communiqué. "Could be another late night.”

She said twice, in English and French, that Prime Minister Justin Trudeau’s chief summit organizer, Peter Boehm, had only slept for three hours the night prior. She said that underscored how “intense” and “difficult” his and the other so-called sherpas’ jobs had been at the summit.

Freeland also told reporters that Canada was rejecting Trump's earlier musings about inviting Russia back to the annual summits after it was kicked out in 2014 for invading Ukraine among other aggressive actions.

"Canada's position is absolutely clear that there are no grounds whatsoever for bringing Russia, with its current behaviour, back into the G7," Freeland said.

Trudeau met with Trump on Friday afternoon at the summit, and exchanged awkward jokes about trade, NAFTA and Trump’s early departure.

In brief remarks to press as they first met, Trudeau said “it's a pleasure to have you here, Donald,” and noted that he had been elected with the same commitment as Trump to grow the middle class.

The president replied by saying that “Justin agreed to cut all the tariffs and trade barriers between Canada and the United States," and laughed.

"Then I would say NAFTA is all right," Trudeau replied, prompting more the laughter in the room with staffers and a few journalists.

Trump said the U.S. and Canda were working on renegotiating the trade deal. “Our relationship is very good, and we are actually working on the elimination of tariffs, with the goal of making the agreement very fair for both countries, and we have made a lot of progress today.” he said.

“We'll see how that gets resolved, but we've made a lot of progress.”

A reporter asked Trudeau if he was disappointed that Trump was leaving the summit early. Trump interjected before Trudeau could answer, saying "no, he's happy.”

Failure to issue a communiqué signed by all leaders would represent the first time in history the Group of Seven industrialized nations couldn’t come to such an agreement.

Last year’s statement came close, after it became clear that Trump would abandon the Paris climate accord. It contained the line that “the United States of America is in the process of reviewing its policies on climate change and on the Paris Agreement and thus is not in a position to join the consensus on these topics.”

A Reuters story quoted a G7 official on condition of anonymity that stated “it’s highly unlikely there will be a final communiqué,” although German Chancellor Angela Merkel has reportedly floated an idea to resolve Trump-driven trade disputes.

At her press conference, Freeland said she wanted to highlight that the communiqué would not be the only document coming out of the summit — a comment that some in the room took as a hint to lower expectations.

“We also have the documents from Charlevoix dealing with supporting democracy, and the declaration of equality between men and women,” she said.