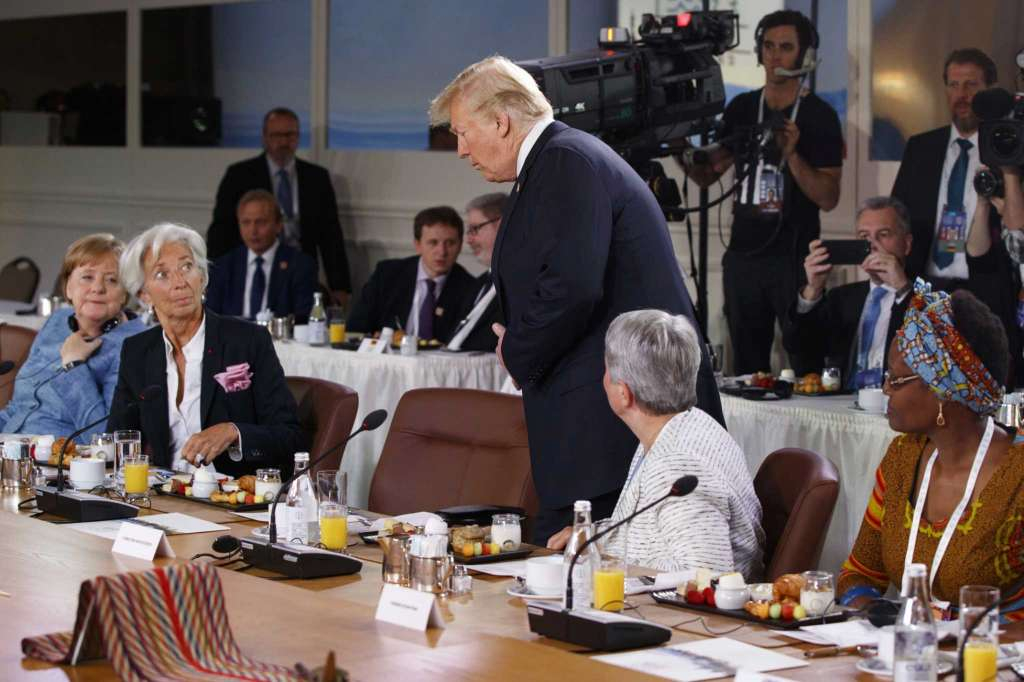 U.S. President Donald Trump, right, takes his seat after arriving late for a G7 gender equality breakfast, as IMF Managing Director Christine Lagarde looks at him, left, at the G7 in Quebec on June 9, 2018. Photo by The Associated Press
Previous story

United States President Donald Trump continued making headlines at the G7 in strange ways on Saturday, by disrupting a top-level breakfast, attacking reporters at his own press conference and doubling down on his lobbying for Russia to re-join the club.

Trump is concluding his brief trip to Canada, the first time the president has been on Canadian soil after almost a year and a half in office — an unusually long wait for a U.S. leader. He will now fly to Singapore where he expects to hold another summit on “denuclearization” with North Korean leader Kim Jong-un.

But as quick as the visit has been, it has also been a whirlwind of astonishing actions by the president of the world’s most powerful nation.

He attacked the trade policies and personally criticized the leader of the host country, Canada, before the summit even began. Then he revealed he would skip out early, missing key meetings on climate change, clean energy and oceans. Following that, he said Russia, which was booted from the alliance after it seized Crimea, should be invited back in.

He kept up the act Saturday, when he arrived several minutes after the start of a breakfast meeting between G7 leaders and the gender equality advisory council that Prime Minister Justin Trudeau created for this year’s summit in the Charlevoix region of Quebec.

Trump missed Trudeau’s introductory statement at the meeting and entered the room while council co-chair Isabelle Hudon, who is Canada’s ambassador to France, was speaking. His arrival was impossible to miss as security personnel had to open a path for Trump through a mob of journalists, many of whom were holding large cameras.

The rapid-fire clicks of cameras intensified as Trump made his way into the room — to the point that the noise of all the cameras almost drowned out Hudon’s remarks. Fellow G7 leaders stared at Trump as he slowly made his way to his seat, which was across the table from Trudeau and next to International Monetary Fund managing director Christine Lagarde.

Before Trump’s late arrival at the breakfast event, Trudeau told the room that he wanted to see the creation of a mechanism to look at gender equality across all areas of discussion and study when it comes to the G7.

“Every topic we discuss needs to reflect on its impact on women as well as further intersectionalities, whether it be race, gender identity or background or cultures,” he said. “These are the kinds of things that we know matter when we’re talking about economic growth that works for everyone.”

At a news conference later Saturday morning, Trump reiterated his support for Russia and his attacks on Canadian trade, particularly the country’s protection of its domestic dairy market.

He first thanked Trudeau for hosting the summit, saying “the people of Canada are wonderful” and it was a “very beautiful country.” And he said a few nice words about the Group of Seven advanced industrialized nations, that they were “bound together by shared values and beliefs.”

But he also launched another trade broadside against his fellow G7 countries, who have been fuming after his administration imposed harsh tariffs on steel and aluminum on national security grounds.

“We want and expect other nations to provide market access,” he said. “We will take whatever steps are necessary...I think (G7 nations) are starting to be committed to a much more fair trade situation for the United States.”

He sniped at Canada’s protected dairy market, one of the elements of the country’s system of supply management for dairy, poultry and eggs, demanding to know “why should we pay?” and stating “it’s going to stop — or we’ll stop trading with them.”

On the renegotiation of NAFTA, Trump also insisted that the deal will have to include a “sunset clause,” or a forced expiry date unless the two countries agree to renew it.

Trudeau had earlier expressed that the U.S. insistence of a sunset clause in a renegotiated NAFTA as a condition for his visit to Washington, D.C. was the reason that he had to call off the trip.

“You have two sunsets — two concepts of sunset,” Trump said. “You have one group that likes to have five years...and you have another group that wants longer, because of the investments. But we’re pretty close.”

U.S. president attacks his own country's reporters on Canadian soil

Trump also restated his shocking claim that Russia — which was kicked out of what was then the G8 in 2014 after its seizure of Crimea in Ukraine, a move the group said violated the United Nations Charter and numerous other international agreements, and then launched an influence campaign against the U.S. during its 2016 presidential election — should be permitted to re-join.

He then blamed former U.S. president Barack Obama for Russia’s Crimea seizure. “He allowed Russia to take Crimea,” he said of Obama. “I may have had a much different attitude.”

.@G7 Press Briefing in Charlevoix, Canada, prior to departing for Singapore! https://t.co/75y1SXuwuU

Trump did not explain how his different attitude might have changed the situation; Russia is a nuclear power.

After growing progressively more animated, the U.S. president ended the press conference by attacking his own country’s reporters. Upon discovering that one reporter was from CNN, he then attacked the outlet as “fake.”

“They don’t cover stories the way they’re supposed to be,” he said about reporters he doesn’t like.

“I came up with the term, fake news,” he said, referring to a term that was actually popularized by a Canadian reporter from BuzzFeed, Craig Silverman, following an analysis of false news stories that helped propel Trump to victory in the 2016 election.

So, was it worth the 600 million this affair cost the Canadian taxpayer?...plus 400 million for overseas education? Sad about Canadian veterans asking for more than Justin can afford.