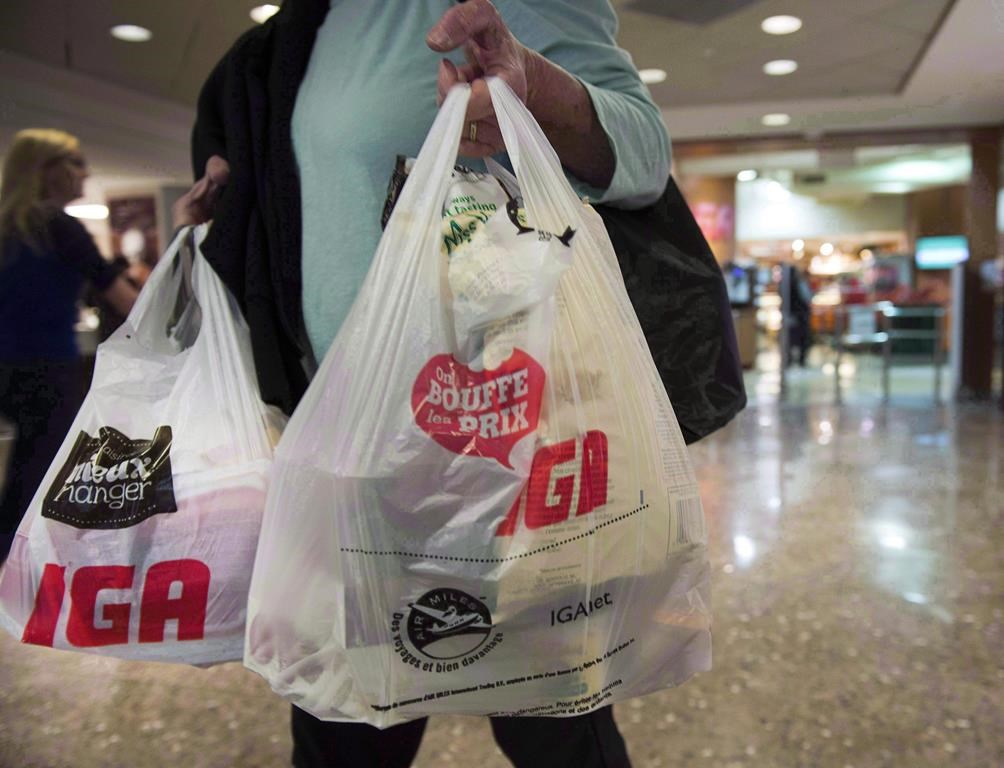 A woman leaves a grocery store on Friday, May 15, 2015 in Montreal. File photo by The Canadian Press/Ryan Remiorz
Previous story

Prince Edward Island could be the first province in Canada to ban retailers from giving out plastic bags after a private member's bill passed third reading Friday morning.

The Plastic Bag Reduction Act, introduced by Liberal member of the legislature Allen Roach, would eventually prohibit retailers from providing customers with single-use plastic bags, encouraging them instead to sell paper or reusable cloth bags.

"The purpose of this Act is to reduce the use by businesses of single-use checkout bags, to reduce waste and environmental damage and to promote responsible and sustainable business practices in Prince Edward Island," the bill reads.

The change would come in phases, with retailers beginning to charge customers 15 cents per plastic bag on July 1. The fee would increase to 25 cents in July 2019, before becoming an outright ban in January 2020, after which businesses could face fines for giving away plastic bags.

"All you have to do is go on the internet and you can see the disastrous videos of bags that are being removed from these big huge animals out in the ocean, and it's really just a tragedy that it's happening," she said.

According to Greenpeace Canada, Canadians generate about 3.25 million tonnes of plastic garbage each year, which the environmental group says could fill 140,000 garbage trucks.

As well, the federal government says more than 150 million tonnes of plastic waste is clogging the oceans worldwide, and it’s estimated that plastic could outweigh fish by 2050.

Bourgeois hopes other provinces will follow the Island's lead in discouraging the use of plastic bags.

"We're small, but we can lead the way in a lot of things," she said. "If this move encourages others to follow, then that's great."

The Retail Council of Canada, however, has some trepidations over the bill. Atlantic Canada director Jim Cormier says the council was not consulted before the motion was put forward.

"It was really concerning that they would go so far as to try to jam something through without even talking to the sector that it's going to impact the most," Cormier said during a phone interview Saturday.

Cormier said that it should be up to the retailers to decide the cost, and that the businesses should also be able to individually develop their own plans for plastic bag reduction.

He added that many customers like getting plastic shopping bags, and some reuse them for garbage bins and cleaning up after their pets.

"We just want to have a way for people to serve the customer," said Cormier.

MLA Allen Roach could not immediately be reached for comment.

P.E.I.'s move comes amid a national conversation about single-use plastics and their environmental impact.

Ikea and A&W are the latest big chains to join the war against single-use plastics, with each promising to limit waste production amid a growing public outcry over pollution.

And A&W Canada said it wanted to be the first fast food chain in North America to eliminate plastic straws, with a plan to stop using them by the end of the year.

I hope we will always be

I hope we will always be informed about which businesses are being responsible world citizens. In my own small way, A&W has my business over MacDonald's from now on.

A&W has a surprising number

A&W has a surprising number of good points in terms of environment and food quality. Well, in Canada--I believe it's in effect a separate chain, with different ownership and strategies, in the US.