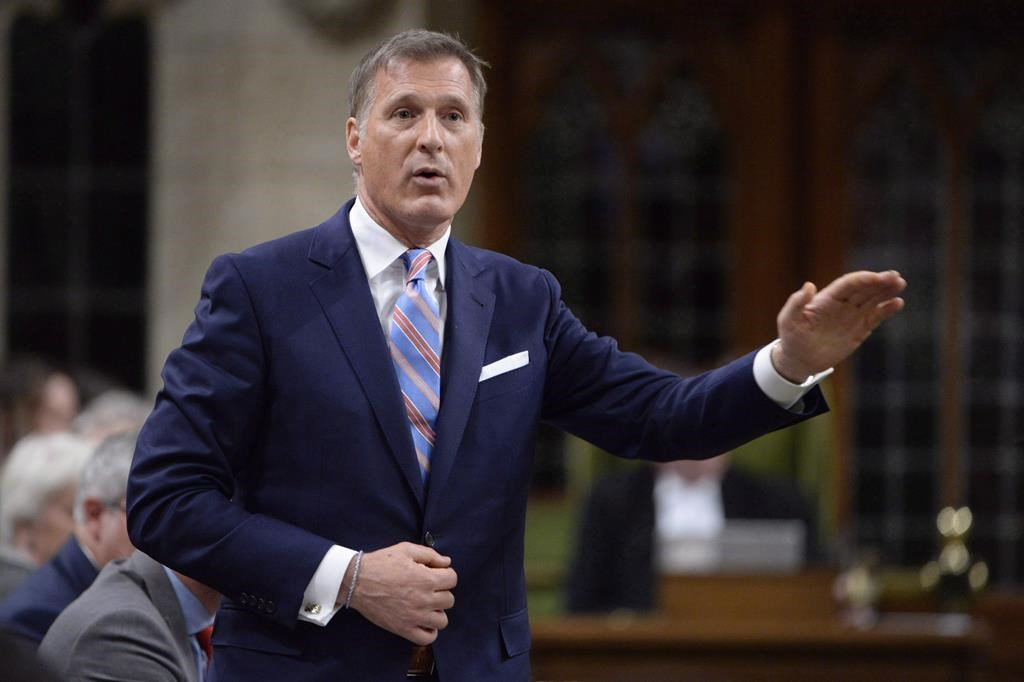 Bernier rises during question period in the House of Commons on Parliament Hill in Ottawa on Thursday, Sept.28, 2017. File photo by The Canadian Press/Adrian Wyld
Previous story
Next story

A senior Conservative source tells The Canadian Press that Scheer made the decision after finding out Monday that Bernier had posted to his personal website a chapter on supply management that is part of his forthcoming book.

The source, who spoke on condition of anonymity, said Bernier "made a commitment to the leader and to caucus that he would no longer promote his book, and he misled the leader and the caucus."

Bernier posted the chapter on June 5, but Scheer was not made aware of it until Monday.

Scheer said in a statement Tuesday night that science critic Matt Jeneroux would assume Bernier's duties as innovation critic on an interim basis.

In a tweet late Tuesday, Bernier said the chapter is "the same that was publicly available for weeks" on his publisher's website, before he decided to postpone the book indefinitely.

The spat introduces a new fracture in an already tenuous relationship between the party leader and the man he beat out for the job a year ago.

Bernier first released the chapter in April, as a marketing tool for his book, "Doing Politics Differently: My Vision For Canada" which was supposed to be published in the fall. The chapter on supply management blamed the dairy lobby in Quebec for electing Scheer and called them fake Conservatives who only joined the party to vote against Bernier because he was advocating to get rid of supply management.

On April 18, after a tense caucus meeting in which other Conservative MPs accused Bernier of stabbing Scheer in the back and causing division within the party, Bernier announced he would postpone the publication indefinitely.

But on June 5, amid U.S. President Donald Trump's latest attacks on Canada's supply management system, Bernier quietly added the chapter to his personal website, where it can be downloaded.

In April 2017, during the party leadership campaign, Bernier penned an open letter to Trump in The Globe and Mail, thanking him for raising the issue of supply management and agreeing with him that "this protectionist system is unfair for the farmers in Wisconsin and other states, who cannot make a better living by selling their products to their Canadian neighbours."

Bernier left the House of Commons before a vote Monday on an NDP motion condemning attacks by Trump and his officials on Canada, his tariffs on Canadian steel and aluminum and expressing support for supply management and Canada's agriculture industries.

The motion passed unanimously as all parties rallied behind Trudeau to support Canadian industries like steel and dairy against Trump's accusations of unfair trading practices.

The Conservatives have jumped on Trudeau in recent days for allegedly offering concessions to the U.S. on dairy as part of negotiations for a new North American Free Trade Agreement. Trudeau met with dairy farmers in Ottawa Tuesday to reassure them of his support for the industry.

The Liberals have been doing everything to sow the seeds of discontent in the party over Bernier's position on supply management, taunting the Conservatives in question period about it regularly in recent weeks.

The dairy industry is on edge thanks to direct and repeated attacks by Trump, who set his sights on supply management during the U.S. presidential election and hasn't let up.

Trump says Canada imposes 270 per cent tariffs on U.S. milk and calls it unfair. However, the U.S. exports more milk to Canada than Canada does to the United States and Canadian critics say the U.S. dairy farmers are suffering because they are producing too much milk, creating a glut in the market that is depressing prices.

Supply management is a pricing control system where quotas are set to regulate production of products like milk, eggs and poultry.