Montrealers should be proud of their new animal control laws 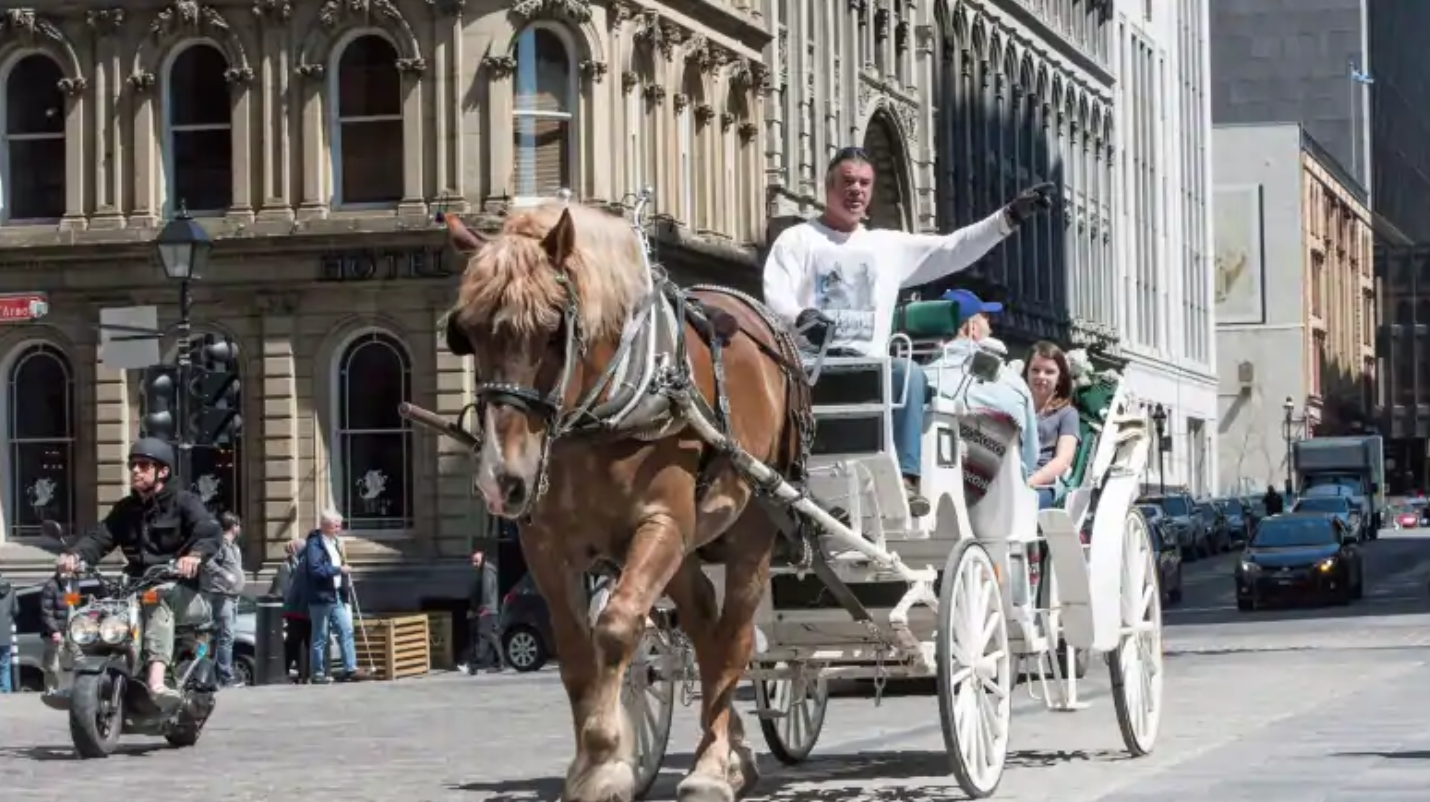 After decades of lobbying, the City of Montreal has finally agreed to ban horse-drawn carriages from its streets, beginning at the end of 2019. File photo by Paul Chiasson/The Canadian Press
Previous story

After 150 years of fighting to ban horse-drawn carriages from the streets of Montreal, the Montreal SPCA — incidentally, the first animal welfare society in the country — finally received the good news it was hoping for.

Montreal’s new administration has decided that animal welfare trumps old-world charm and, when it unveiled its new animal-control bylaw on Thursday, one of its main components was that horse-drawn calèches throughout the city will be a thing of the past by 2020.

“With the goal of protecting the health and well-being of horses, the City of Montreal will be banning horse-drawn carriages starting December 31, 2019,” the city announced in a press release.

The familiar clop-clop-clop of horses carrying tourists around Old Montreal has long been a familiar sound to locals and visitors, and a tradition for centuries. According to animal rights advocates, however, the calèches are an antiquated and often inhumane industry.

There have been at least four horse-drawn carriage accidents in Montreal since 2014, writes The Canadian Press, as well as several hundred citizen complaints over the treatment of the horses. The city handed out 14 tickets in 2016 and 2017 for infractions related to horse health and the state of the carriages.

Former mayor Denis Coderre’s attempt to impose a moratorium on horse-drawn carriages in 2016 was blocked by a court injunction, but now the ban is here to stay. London, Paris, Beijing and Toronto have long done away with the practice. Barcelona recently did the same.

Relationship with animals 'is evolving'

The Montreal Society for the Prevention of Cruelty to Animals was quick to congratulate both Montreal Mayor Valérie Plante and her party, Projet Montréal, on the new legislation.

“We hope to have the opportunity to work with the city and rescue groups to place these horses with loving and attentive caretakers," says the head of the Montreal SPCA. #polmtl

“The Montreal SPCA has been fighting against the use of horses downtown for nearly 150 years” said attorney Alanna Devine, the organization's director of animal advocacy. “The end of this industry represents an important victory for our organization and demonstrates just how much our relationship with animals is evolving.”

The ban's start date at the end of next year gives tour operators a much-needed and responsible transition period, the SPCA added, along with time to find retirement homes for all of the soon-to-be-retired carriage horses.

“The Montreal SPCA already has a solid network of foster homes and horse rescues and would be more than willing to help with proper placement of the city’s carriage horses, as we have already done for some individuals in the past,” said Elise Desaulniers, executive director of animal welfare group.

“We hope to have the opportunity to work with the city and rescue groups to place these horses with loving and attentive caretakers.”

The SPCA has long reminded Montrealers that carriage horses are often forced to work nine or more hours per day, seven days a week, are at risk of collisions with vehicles, and exposed to startling loud noises (which can also endanger humans around them), extreme temperatures and years of walking on unnaturally hard surfaces.

Numerous videos taken by concerned passersby and posted by the Anti-Calèche Defense Coalition have captured exhausted or injured horses slipping on metal slabs on Old Montreal streets, while cars drive by or working while summer temperatures hovered around a sweltering 35°C.

A carriage horse is seen limping on the streets of Old Montreal in a video posted to Facebook by the Anti-Calèche Defense Coalition in 2017.

A new comprehensive plan for animals

The ban on horse-drawn carriages is part of a larger animal welfare plan for Montreal, which also includes the hiring of new animal inspectors and experts who will be sent to dog parks and other areas to offer free training and safety tips.

Based on the announcement, it’s clear that a new, comprehensive animal-control plan is in the works for the City of Montreal.

While the horse-drawn carriage ban is certain to be what makes national and international news, it’s the rest of the plan that leaves me extremely encouraged. This is an administration that is finally approaching animal control not from a reactionary, fear-based point of view, but moving toward long-term prevention and overall public education; the most hoped-for outcome of animal rights advocates and animal lovers in general.

Plante, who campaigned on a promise to reform the previous administration's controversial pit bull ban and put an end to the calèche industry, tweeted that she was extremely proud of the work of her colleagues and all the efforts they had made to ensure Montreal is a city where public safety and co-existing with animals go hand in hand.

Rescues only in the pet stores

In a clear nod to animal rights groups, which have been calling for many of these measures for years, the city will soon launch public animal awareness campaigns, workshops that help children understand how to behave around animals and avoid dog bites, as well as a pilot project on animal sterilization for low-income families. Starting Jan. 1, 2020, all cats, dogs, and rabbits will also have to be spayed or neutered, and it will be mandatory for pets to be micro-chipped and registered.

Certain harmful animal control measures, such as spiked or electric dog collars will become illegal, as will tying an animal up for more than three hours without supervision. Any dog involved in a violent incident or showing any signs of aggression must wear a muzzle, be kept on a short leash away from children, and will have to be evaluated by a behavioural expert to determine whether it should be euthanized. The new regulations impose tough conditions on dogs that are considered potentially dangerous due to past behaviour.

The new regulations do away with the city's much-hated pit bull ban; after much expert consultation, the administration concluded that a pit bull ban did absolutely nothing to make residents safer and penalized innocent dogs and their owners. The Quebec government recently reached the same conclusion when it decided to backtrack on its own decision to enforce breed-specific legislation.

But the biggest change, and one that will make the most long-term difference, in my opinion, in terms of tackling the terrible pet overpopulation problem and overall perceptions of animal welfare in public, is the new rule that will require pet stores to sell only rescued animals. It has always seemed unfathomable to me that shelters can be overflowing with perfectly healthy animals eager for a forever home, while pet stores continue to sell animals coming from dubious breeders and puppy mills; often raised in horrific conditions.

I'm not the only one thrilled by last Thursday's announcement. Karla Oz, who adopted a rescue dog from the SPCA, was ecstatic.

“My Mia was raised in a basement with approximately 20 other dogs for the sole purpose of breeding and selling her puppies,” she told me. “She had her vocal chords cut, never went outside, got kicked around, and was a messy, cigarette smelling, lump of knots when I picked her up. For her, and all the other dogs still living in these conditions, I am so, so happy to read this today!”

Calling it a “major win for animals,” writer and animal rights advocate Jessica Scott-Reid posted on Facebook: “Almost exactly one year ago I wrote for The Globe and Mail how former Quebec leadership was breeding a culture ripe for animal cruelty. ‪I don’t get to see such tangible change very often, but today this change looks very, very real. I’m very, very happy!”

In her scathing 2017 article, Scott-Reid spoke of Quebec’s reputation of being one of the worst regions in Canada in terms of animal welfare (it was ranked "best province to be an animal abuser" by the U.S. Animal Legal Defense Fund four out of the last five years), and how the province remains a haven for fur farms, animal-testing labs and backyard breeders.

“As long as city and provincial leaders continue to allow the exploitation of horses, showcasing them as mere means of entertainment and revenue, and so casually placing them at risk of harm, the culture of cruelty toward animals will continue to thrive in Quebec,” she wrote.

This week’s news was a significant dent in that culture of cruelty and a major step towards better, more balanced, humane, and informed relationship with animals in the city. It's good news for all Montrealers — both the two-legged and the four-legged kind.

Thank you. This article

Thank you. This article gives me hope. I haven't been to Montreal but was in Quebec City and was horrified by the carriages. Here in BC we have to stop this in Victoria and Stanley Park. Cruel treatment of wholly people-dependent animals is draconian. Thank you Montreal, I am very inspired.