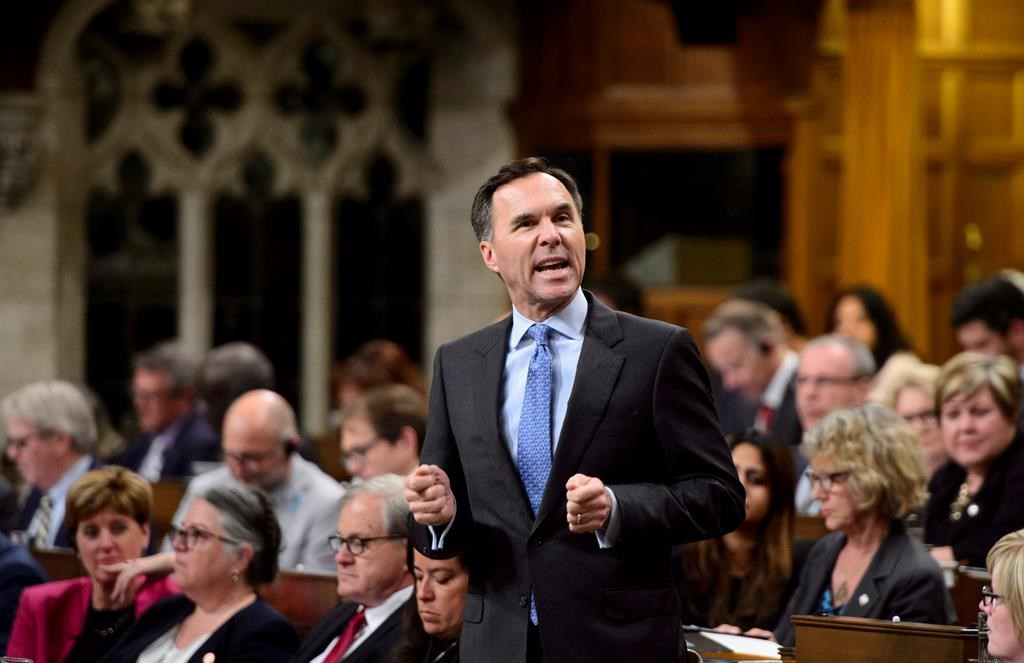 Minister of Finance Bill Morneau stands during question period in the House of Commons on Parliament Hill in Ottawa on Tuesday, June 5, 2018. File photo by The Canadian Press/Sean Kilpatrick
Previous story
Next story

Four in every 10 children residing in Finance Minister Bill Morneau's downtown Toronto riding live in poverty, one of the highest rates identified in a new report tracking child poverty rates across all 338 federal ridings.

The anti-poverty advocacy group behind the report, Campaign 2000, hopes the data will prod the government to approve a soon-to-be-finalized poverty-reduction strategy before next year's federal election, and enshrine commitments in legislation so it cannot be undone by a future government.

The Liberals have promised to create a poverty reduction strategy before the end of this four-year mandate.

Morneau will have a say in how much new federal spending may be made available for the strategy, which would have an effect on his riding of Toronto Centre, where two-fifths of children live in low-income enclaves near the wealthy Bay Street corridor.

The downtown Toronto riding is home to a large number of visible minorities and recent immigrants, many of whom live in social housing, the report says.

The report being released Monday says ridings with high child poverty rates like Toronto Centre also had higher proportions of lone parent families and Indigenous Peoples, such as the Saskatchewan riding of Desnethé-Missinippi-Churchill River and Winnipeg Centre, which ranked second and third, respectively, for the highest child poverty rates in the country.

The northern Manitoba riding of Churchill-Keewatinook Aski, a predominantly rural riding home to multiple First Nations, had a child poverty rate of 64.2 per cent, more than three-and-a-half times the national average recorded in the most recent census.

"We might hear from some politicians that, 'this is not an issue in my backyard' and that really poverty is about either getting a job, or pulling up your bootstraps and it's because of people's individual choices. This really shows that there are systemic factors at play," said Anita Khanna, national co-ordinator of Campaign 2000.

NDP-held ridings have child poverty rates of on average 22 per cent, while the figure is about 15 per cent for Conservative ridings.

The latest census found that 17 per cent of children 17 and under lived in low income, or about 1.2 million children overall.

Campaign 2000 is calling on the Liberals to set a target of cutting child poverty in half over the next five years, and boost the base amount of the Canada Child Benefit, the means-tested payments Social Development Minister Jean-Yves Duclos will tout on Monday.

The group is also calling for the creation of a federal "dignity divided" of $1,800 per adult and child who live below the poverty line, which would be like a top up to the GST credit and could help lift hundreds of thousands out of poverty.

"Child poverty is an issue that affects all communities and therefore all MPs and all political parties should be working towards its eradication," Khanna said.

"This is an issue that is affecting people in their ridings and they have a stake in the strength of the strategy."

Opinion: Children caught in the grind of poverty and war as UNICEF celebrates 70th birthday