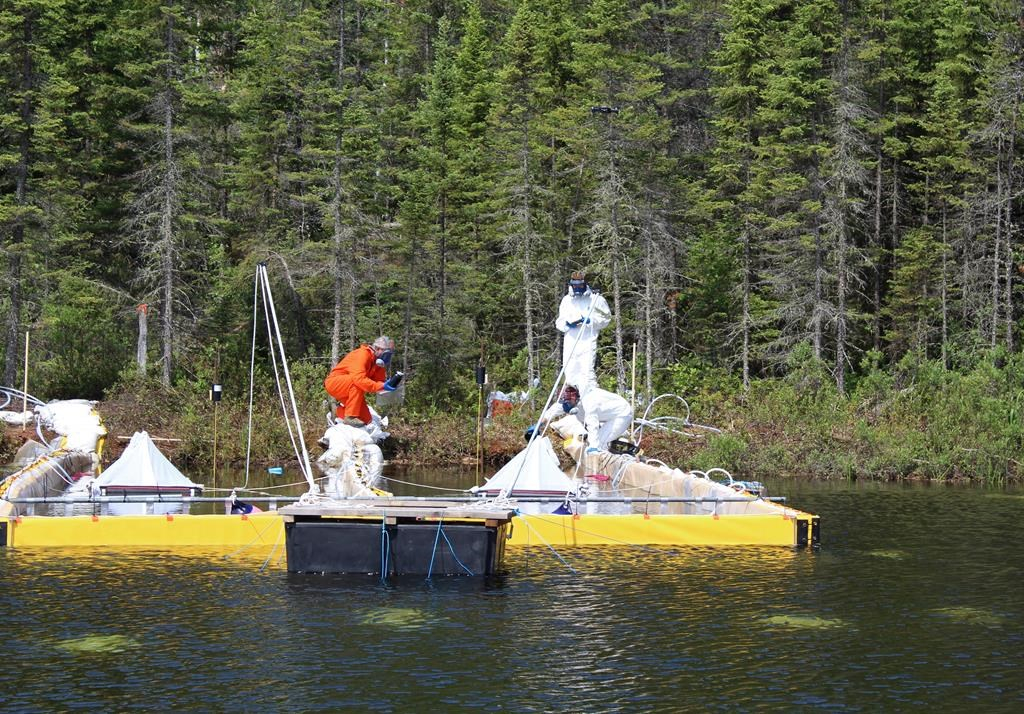 Researchers and professional spill responders monitor a deliberate spill of oilsands bitumen and crude oil into a lake in northwestern Ontario in an experiment over how the ecosystem responds in this undated handout photo by Tonya Zelinsky, IISD-ELA.
Previous story
Next story

Researchers were in northwestern Ontario on the weekend spilling diluted oilsands bitumen and crude oil into a lake to study how the ecosystem, from microbes to fish, responds.

Vince Palace, the scientist who is leading the experiment, said the area is typically known for experiments involving a whole lake, but this work is different.

"We're using small enclosures to contain that oil," he said.

The oil was spilled inside four yellow floating boomed rectangles, each along 2.5 metres of shrub and sphagnum moss shoreline.

The enclosures stretch 10 metres into the lake and contain 20,000 litres of water. Curtain-like sides extend down and are carefully affixed to the lake bottom with lines of sandbags filled at the local gravel pit and placed by a small army of students in waders and wetsuits.

The spills were 1.25 litres each and were to be left for 72 hours then cleaned up by professional oil-spill responders.

With any oil spill, even after clean up, there is residual contamination.

"We're interested in looking at the impact of residuals," Palace said in an interview before the experiments were conducted.

Researchers were in northwestern Ontario on the weekend spilling diluted oilsands bitumen and crude oil into a lake to study how the ecosystem, from microbes to fish, responds. #oil #environment

Palace's team will study impacts on microbes, algae, zooplankton, insects, wood frogs, and fathead minnows by sampling soil, water, and sediment before and after the spill and clean up.

They'll look for direct impacts from fouling and poisoning, but also indirect effects on fish survival and reproduction.

Palace notes that when oil spills, social pressure and regulatory commitments create a huge drive to clean it up.

"In marine environments, there are microbes present that will respond to the presence of oil to degrade it. So it may be that there is a benefit to leaving the oil in place to degrade," Palace said.

Next step up from the lab

The researchers hope to find out if such oil-eating microbes exist in the freshwater environment of oil-naive Boreal shield lakes.

Diluted bitumen's behaviour in freshwater has been studied extensively in laboratories.

Her studies have manipulated variables such as wave action and temperature, but not things like wind, rain and sun.

So, when it comes to understanding how oil behaves in a lake "maybe we're missing something," she said.

This is "the next step up" from the lab.

Scientists are planning an oily bitumen spill in this Ontario lake