Pay-what-you-can grocery opens in Toronto, but experts say model can be hit-or-miss 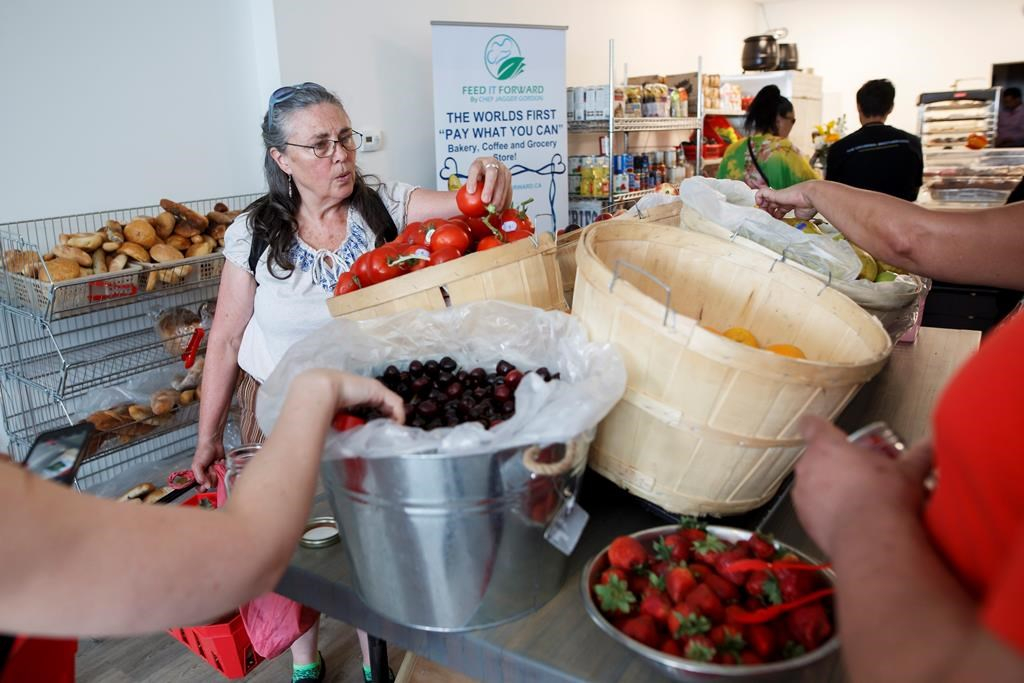 There's a reason you don't often see a pay-what-you-can grocery store, say marketing experts intrigued by a Toronto venture billed as the first of its kind.

But chef Jagger Gordon says it's an experiment he's eager to try with his Pay It Forward Grocery Store, which opened Saturday with many of the typical staples you might find in a conventional supermarket.

The difference is that visitors are encouraged to take just what they need, and only pay what they can, even if that's no money at all.

Gordon doesn't expect to make a profit from this project, which includes a bakery and cafe and is the latest endeavour from his zero-waste and food security campaign, dubbed Feed It Forward.

He says the goal is to feed the hungry with food that he's "rescued" from food terminals, supermarkets and bakeries that would otherwise go to waste.

"It's a simple procedure of taking those trucks that are destined for landfills and hijacking them and giving them to people in need," says Gordon, who last year helmed a pay-what-you-can restaurant that made soup and sandwiches from discarded produce that might have a bruise or blemish.

"There's more of a demand for food that is needed by Canadians than people know."

You'd be hard pressed to find critics of such a worthy mission.

The sliding scale concept, however, is more often applied to arts events like theatre, dance or museums, notes marketing professor Claire Tsai of the University of Toronto's Rotman School of Business.

And generally speaking, it's not something she expects would translate well to shopping for fruits and vegetables.

"When people think about groceries, people want to save money," Tsai says.

"It's not the same as going out to eat. Going out to eat is a time for us to enjoy ourselves — people are more generous in buying alcohol, buying drinks. When you are in this mindset of shopping for groceries, people look for savings."

The charitable aspect in this case could affect that, she allows, as would peer pressure to do your part if the neighbourhood is tight-knit.

"You need a relationship with the buyer and seller. You cannot have everyone who just wants to come and get a freebie ... and at least a group of high-income people who are willing to support this cost."

There will undoubtedly be some who take advantage of the system, adds marketing expert Brent McKenzie at the University of Guelph. But he suggests this venture is buffered by a uniquely altruistic spirit. Public perceptions certainly play a role, too.

"They've had studies, too, like in an office setting, where people pay for coffee or snacks and things," McKenzie notes.

"When it was a specific price and you had to put your money in, they actually found they made more money when they just said, 'Put in what you think you can today.'"

Gordon certainly has faith in people with means to cover those who don't. He says his eight-month run with a pay-what-you-can restaurant "balanced out" in the end.

There are limitations to Feed It Forward, however.

He notes visitors can only take one day's worth of food for a family, or choose a bi-weekly box of pre-packaged food and recipes. And checking out involves providing your name, contact information and details on what was taken.

Gordon adds that costs are relatively low since food is donated and labour is volunteered.

He expects to cover overhead through fundraisers, online donations and revenue from his catering business, Jagger Gordon Catering. He says he's also in the process of registering the project as a charity, and pursuing corporate backers and sponsorships.

Still, suggesting pay-what-you-can risks turning some potential benefactors off, says food industry expert Robert Carter, noting the fear of paying too much, or too little, can lead some uncertain shoppers to go elsewhere.

"I could see that being a bit of a challenge," says the NPD Group executive. "It's such a different mindset for consumers."

Nevertheless, he pointed to millennials as a socially conscious generation that is changing the way consumers assess value and spend money.

"If you look at the younger cohort today, rather, the millennial cohort, we know that they're very much motivated by cause-based situations," says Carter.

"If they know this is going to help the community, (they're more likely to say), 'Then I should be spending my money here instead of going to a corporate store."