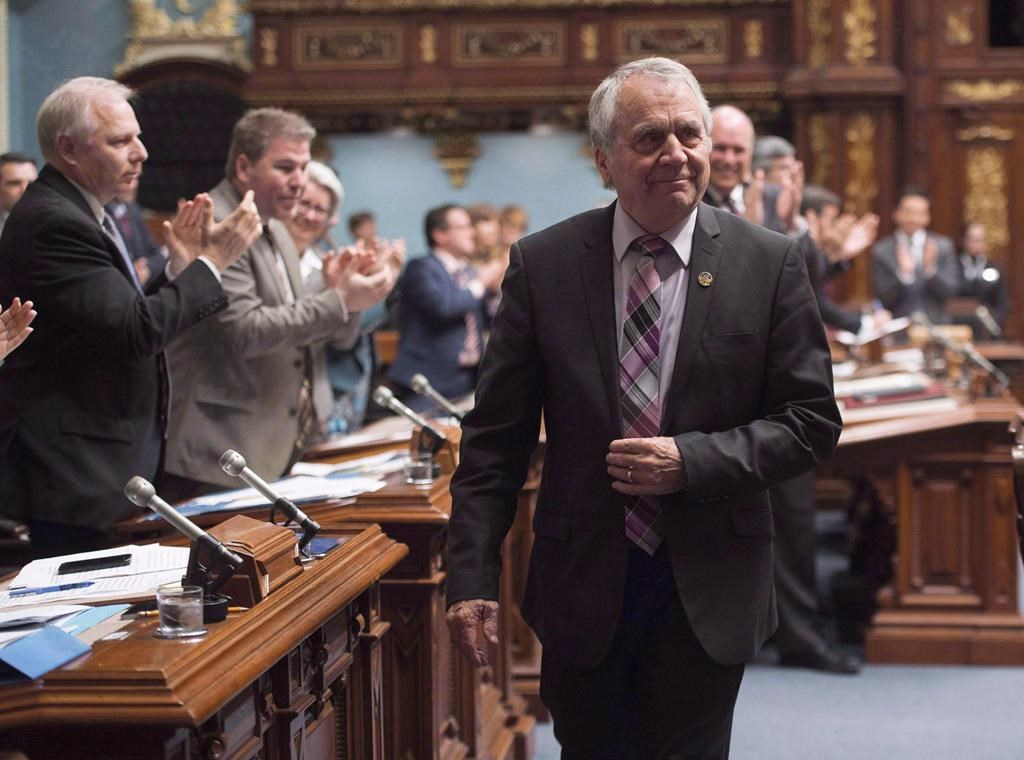 Parti Quebecois MNA Francois Gendron, walks back to his seat as members of the National Assembly applaud for being an elected member for the last 40 years in Quebec City on Tuesday, Nov. 15, 2016. File photo by The Canadian Press/Jacques Boissinot
Previous story
Next story

he Parti Quebecois is partly to blame for the lack of support for sovereignty, according to the province's longest-serving legislature member, who believes his party has renounced its duty to promote independence.

Francois Gendron, 73, will retire from political life this fall after 42 years in the legislature — but not without a few parting shots directed at the media, his political rivals and his own party.

"The PQ has things to blame itself for," says Gendron, who was first elected in 1976 under former Parti Quebecois premier Rene Levesque.

In a lengthy interview with The Canadian Press, the politician says he has three words of advice for his party, which was founded to make Quebec a country but has thus far proven incapable of rallying the population to its cause.

Gendron, a former teacher, believes sovereigntists have to return to the basics of political activism, and show Quebecers what they have to gain from independence.

His party, he believes, has failed in this scholarly duty, noting that they haven't produced a single substantial document on the benefits of sovereignty since the last referendum in 1995.

When asked if he's scared he'll never see Quebec become its own country, he responds, "the answer is yes."

The outspoken politician had nothing but good words for former Bloc Quebecois leader Martine Ouellet, who stepped down from her party earlier this month after losing a confidence vote. She currently sits in provincial legislature as an independent but has indicated she won't run in October's election.

Ouellet, who was criticized at times for her laser-like focus on independence, is a woman "of conviction," who wears the cause proudly and knows it inside and out, Gendron says.

In contrast, he has harsh words for the poll-leading provincial Coalition Avenir Quebec, whose members he describes as "puppets" with no program, and Philippe Couillard's Liberals, whose "billions" spent on advertising he says ought to provoke a "social crisis."

Gendron also blames a highly individualistic culture and a lack of education among citizens for the decline of the independence movement and most other collective efforts.

"There's no more culture, no more history, people know just about nothing," he says.

Some of his harshest criticism was reserved for the media, which in his opinion is largely responsible for discrediting the noble role of elected politicians through endless commentary that "pollutes the airwaves."

Gendron, who will not seek re-election in this fall's election, says that what he'll miss the most is representing the 35,000 people in his western Quebec riding of Abitibi-Ouest.

While outspoken on many topics, he remains more discreet when questioned on his party's possible fate come October.

He notes, with a touch of disappointment, that the party has lost its foothold in many ridings that were once PQ strongholds.

In his decades-long career, Gendron has held a number of cabinet posts, many of them linked to regional development or resource management.

He was instrumental in creating the first regional development policy in 1982, which he describes as a moment of pride.

These days, he's faced with the task of sorting decades of photos, documents, press clippings and memories as he prepares to make his exit.

"When we stir all this up, madam, it disturbs," he says. "It comes to get you at an emotional level."