Montreal aims to increase safety for women at festivals, but more can be done 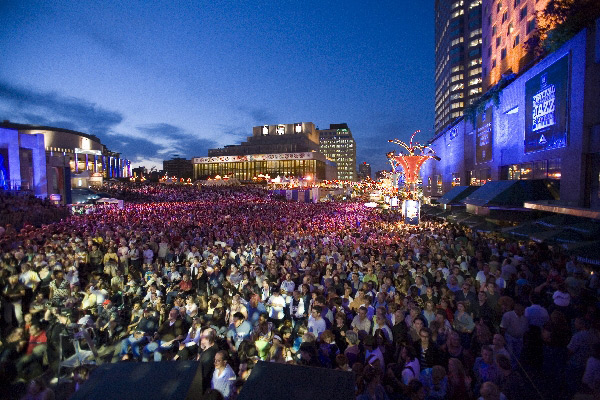 Is there anything more carefree than a summer music festival? The tunes, the weather, the music-loving crowds, the groups of friends gathering to make memories and have a good time? Summer festivals are hard to beat. But, if you're a woman, there's also a dark side to them. The possibility of harassment and sexual violence increases when you're attending one.

Emboldened by the anonymity of large crowds, free-flowing alcohol and occasionally drugs on site, too often predators use festivals as a hunting ground to verbally and physically harass, grope, push women's boundaries, and even commit rape.

There isn't a summer season that isn't marred by reports of an assault at a festival. It's a widespread, worldwide phenomenon. How bad is it? Earlier this year, Teen Vogue journalist Vera Papisova went to the annual Coachella music and art festival in California to report on the problem of harassment during summer festivals. During the 10 hours she was there reporting, she was groped 22 times.

Recently, the City of Montreal, renown for its many international summer festivals, adopted an official declaration against all forms of sexual violence. The city took its cue from a 2017 study published by the Conseil des Montréalaises, an advisory group to Montreal’s city council on gender equality that found that 56 per cent of women who attended outdoor events in the city reported being harassed. The city decided it was necessary to publicly acknowledge that there is a problem and it needs to be tackled.

The city is encouraging measures and initiatives by festival organizers to minimize aggression against women and make them feel safer.

The “Hirondelles,” an all-female patrol of safety officers put in place by the Montreal Jazz Festival last year, will return. This year they will also be present at Les Francos, Osheaga, Sonic, and other major festivals. One hopes their presence is expanded to include every summer festival.

Dorothy Alexandre, president of the Conseil des Montréalaises, welcomed the city’s initiative. “We helped draft that declaration and we’re certainly happy with it because some of the initiatives that we proposed after the results of the study were published – like Les Hirondelles – are coming back again.”

Montreal and the Grand Prix

Attempting to clean up an image often perceived as sexist, the Grand Prix (a big part of the Montreal summer scene) also recently introduced a code of ethics for its official partners and plans to introduce measures toning down some of the female objectification with which it’s often associated. The organization’s recent decision to stop using grid girls in pit lanes during races has been lauded by some critics as a major step toward the company’s modernization in the #MeToo era.

A week before one of the biggest and glitziest parties was about to descend on Montreal, the timing couldn’t have been better for the city to present the declaration. Not only is the Canadian Grand Prix the unofficial start of festival season in Montreal, it’s been alleged that the Grand Prix weekend is a hotbed for human trafficking and sexual exploitation. That has been disputed by Stella, a Montreal community organization operated by and for sex workers, who claim that there isn’t any noticeable increase in demand for sex workers that weekend. On the contrary, Stella says increased policing makes it harder for sex workers to protect themselves. The Conseil des Montréalaises plans to get to the bottom of this with its own research.

“In terms of the Grand Prix and its issues with the sex trade, the City of Montreal is working with the federal government to make sure that everyone coming into the city (for the Grand Prix or other events) knows that the city is against sexual violence against women,” says Alexandre.

“We currently have a three-year mandate to conduct a study to see if there really is an issue with the sex trade during the Grand Prix. Some women’s groups claim that the sex trade increases during the Grand Prix and others claim that isn’t the case. Our goal is to document everything that surrounds the event and come up with a few results as of next year. And when our three-year mandate is up we’ll be able to offer recommendations in terms of sex trafficking, but also in terms of sexual violence. The declaration was initially supposed to be about the Grand Prix and sex trafficking, but after the city met with women’s groups, they decided to expand it to include violence against women.”

Melanie Doucet has had a significant part to play in these new measures. In 2016, Doucet was slipped a date rape drug while attending the Osheaga music festival. Appalled by dismissive and victim-blaming treatment by security staff when she sought help, Doucet quickly became a vocal advocate for better safety measures.

She launched a petition demanding that festival organizers do more to protect participants from sexual violence. She was instrumental in raising public awareness of a problem and starting a movement that cemented the desire to improve protection. Her petition and her subsequent media interviews about her scary experience prompted festival organizers from around the country to contact her for advice on how to be more proactive with their own events.

Reached by e-mail, the Pierre Elliott Trudeau Foundation scholar and McGill University PhD student in Social Work commended the city for moving forward with new measures and a public declaration that women’s security matters to them.

“I think it's wonderful that the city and new party in power is committed to addressing sexual violence at music festivals - and the Conseil des Montréalaises has been pushing for this for a few years,” she said. “I hosted a panel with Dorothy Alexandre and Jacques André Dupont (CEO of Spectra, President of the Montreal Jazz Fest and Les Francos) on this issue last November, at the annual Pierre Elliott Trudeau Foundation conference, which was held in Montreal. We talked about the festival sexual violence prevention and intervention initiatives that had been put in place since my incident at Osheaga and the report that the Conseil had published, and how those initiatives need to be constantly evaluated for their effectiveness and accessibility.”

Doucet believes that festival training is a vital part of the equation. “One of the things that seems to be lacking right now is the festival community training and awareness that needs to go hand in hand with those initiatives, such as Les Hirondelles. "This is a change in festival culture, and for that to happen, the people attending festivals need to be made aware of the realities, the risks, the signs, how to be an ally and how to intervene as a bystander when they witness sexual violence incidents. I think this component needs to be added and embedded into the festival community - giving out information packages with the purchase of tickets, posting information on their websites, making some educational short videos, having a few booths on festival grounds for people to stop and talk with trained peers, etc.”

Doucet mentions potential partners for the City of Montreal and festival organizers, like PLURI (Peace Love Unity Respect Initiative), which aims to reduce harm on dance floors and within the nightlife economy by organizing workshops for event organizers, community discussions and producing educational material.

“I also think we need to go beyond just the festival scene if we want to be truly progressive - the nightlife scene also deals with those issues. I was pleased to see a partnership between Datcha (a Montreal dance club) and PLURI announced, I think we need to also see more of that within the city. We need to take responsibility as a community to change this culture of entitlement to women's bodies, and these are some good examples of how we can start going in that direction in Montreal.”

Cities like Vancouver also seek solutions with such initiatives as Good Night Out. And City of Ottawa-funded Project Soundcheck assists festival organizers in improving staff training and avoiding bystander apathy. The Shambhala festival in B.C. has a Women’s Safe Space that is open 24 hours a day and staffed by women offering non-judgmental support throughout the festival. Outreach staff, found at the gate to the festival and in the crowds, train volunteers to notice people in distress.

“I recognize that I was able to be heard via the media because I am a privileged white cis woman,” says Doucet, “and I used my privilege to shed light on the issue of sexual violence at music festivals. We need to be more inclusive of who gets to be heard in public spaces on this issue as well. When it comes to sexual violence, women of colour, queer women, trans women, non-binary folx, etc. are often much more vulnerable to sexual violence and it’s super important to take that into consideration in all initiatives and training.”

A constant evolution of public awareness and improved measures

Initiatives like these do reverberate elsewhere. Just like the Montreal Jazz Fest, the Festival d’été de Québec (FEQ) recently announced additional security measures for women. Approximately 60 FEQ employees and volunteers will patrol the site for signs of sexual violence or harassment.

Security staff, beer staff, and members of the Brigade will be easily recognizable by their yellow bandanas. Most importantly, they will benefit from a half day of training offered by the Quebec Coalition of Sexual Assault Centres.

In the meantime, the City of Montreal intends to continue working closely with the provincial and federal governments, and all their partners, to ensure that women’s safety during public events remains a priority.

“I want to congratulate the festival organizers who have taken the steps to quickly implement safety measures on their sites,” said Montreal Mayor Valérie Plante. “I encourage all festival organizers to follow their example and make Montreal a city that is equal and inclusive for all. Having said that, our administration won’t stop here. We will continue our work gathering information to improve our measures and fight against all sexual violence and harassment.”

The recent measures implemented by the City of Montreal and local festival organizers are an encouraging and important step toward preventing sexual violence at music venues and festivals, but even more can and should be done to continue to make these spaces free of violence and harassment for all participants.

Montrealers should be proud of their new animal control laws

Not all heroes wear bras: students fight for the right not to wear one