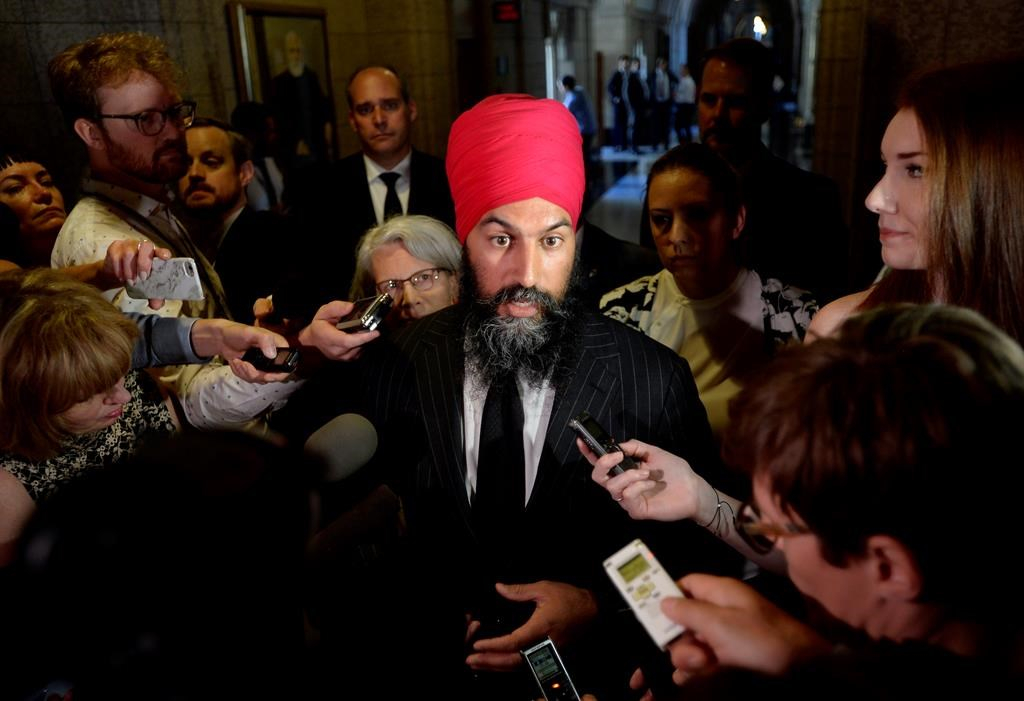 NDP Leader Jagmeet Singh speaks to reporters in the in the Foyer of the House of Commons on Parliament Hill in Ottawa on Tuesday, June 19, 2018. Photo by The Canadian Press/Justin Tang
Previous story
Next story

NDP Leader Jagmeet Singh says he's reviewing his tour schedule and his party's policies in the wake of a federal byelection Monday in Quebec, in which the New Democrats' vote collapsed.

The NDP finished a distant third Monday in a byelection held in Chicoutimi-Le Fjord, taking just 8.7 per cent of the vote in a riding where the NDP won in 2011 and finished a close second in 2015.

The collapse of the NDP, along with an equally disastrous showing for the Bloc Quebecois, worked to the benefit of the Conservatives, who wound up snagging the seat from the ruling Liberals.

Monday's dismal result marked the second time since Singh became leader that the NDP has been reduced to the role of bystander in a Quebec byelection.

The party came a distant fourth last October in Lac-Saint-Jean, where it had finished a close second in 2015.

"It's clear we're very disappointed with the results and the results show that we've got a lot of work to do," Singh said Tuesday.

The NDP rode a so-called orange wave under the late Jack Layton in 2011, sweeping 59 of the province's 75 seats, and vaulting over the Liberals to capture the role of official Opposition for the first time in NDP history.

But it's been downhill since then.

Under Tom Mulcair, the party won just 16 seats in the province in 2015. And judging by the grim faces of Quebec MPs who stood behind Singh as he fielded questions Tuesday, few if any think their seats will be safe during the next federal election under Singh's stewardship.

Singh vowed to do whatever it takes to re-create the orange wave.

Indeed, Singh added, he's even considering spending some time living with a family in Quebec to immerse himself in the province's culture.

Singh said he has a "formidable" team in Quebec but it's clear that the issues the NDP has been raising thus far "aren't penetrating and we're not connecting with people. We need to make sure that our message resonates with people."

He also acknowledged that he's had "different crises to manage" since becoming leader — including caucus discontent with some of his decisions and sexual harassment allegations against two of his MPs — which "takes away time and effort from other areas."

Singh insisted his religion was "not at all" a factor in the NDP's disastrous byelection showing. Indeed, he said, he was welcomed warmly in Chicoutimi-Le Fjord when he campaigned there.

One of his Quebec MPs, Alexandre Boulerice, said it's not that Quebecers don't like Singh, it's that they don't know him.

"The real problem is that they don't know him enough yet and this is our job to present him," Boulerice said. "This is something we need to do, we need to do it fast, and we know that."

Singh, an Ontario politician before jumping to the federal scene, does not have a seat in the House of Commons, which hasn't helped him raise his profile in Quebec or anywhere else across the country. Singh said he's open to running in a byelection in future but Boulerice said he should do so only if he's certain to win.

There will be a byelection called soon in the Montreal riding of Outremont, after Mulcair resigns his seat later this month.

The collapse of the NDP and Bloc in Quebec changes the electoral equation for both the Conservatives and the Liberals, the only parties still in contention in the province.

Justin Trudeau's Liberals won 40 seats in Quebec in 2015 — a number of them in unlikely ridings like Chicoutimi-Le Fjord, where four-way contests allowed them to win with a narrow plurality of the votes.

Those splits allowed Social Development Minister Yves Duclos to win his Quebec riding with just 28.9 per cent of the vote. He said Monday's byelection reinforces his belief that people no longer feel any allegiance to political parties and vote increasingly for whomever they feel is in their best self-interest.