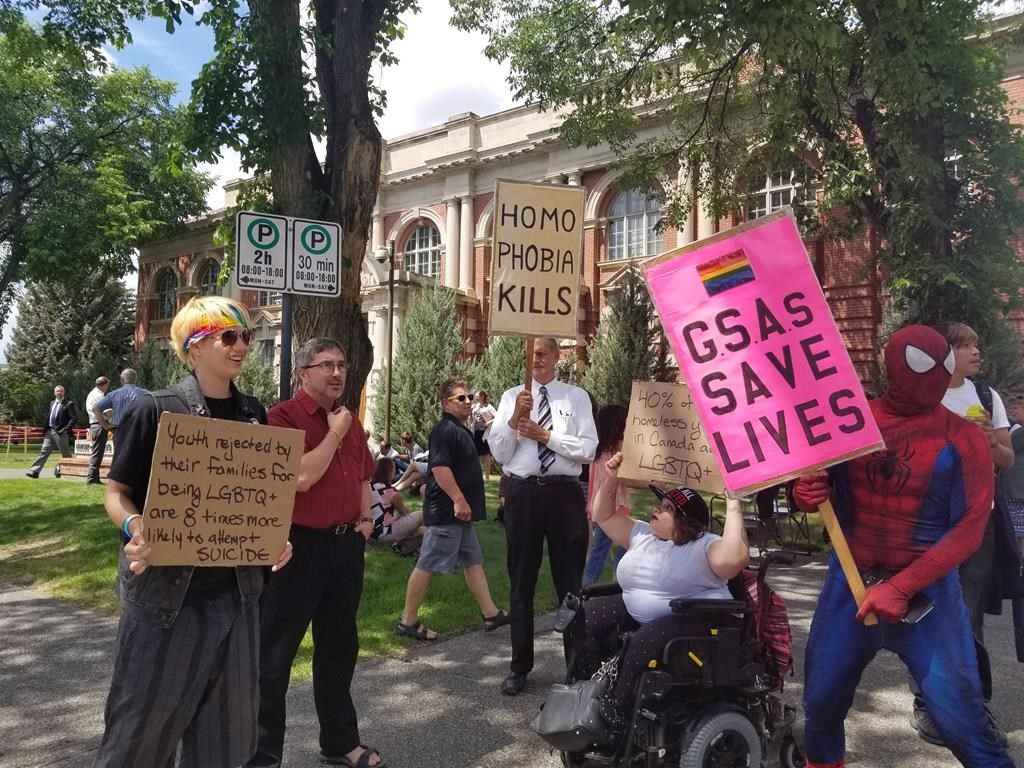 People hold signs outside of a courthouse in Medicine Hat, Alta. on Wednesday, June 20, 2018. Photo by The Canadian Press/Lauren Krugel
Previous story
Next story

In the first court challenge against Alberta's gay-straight alliance rules, lawyers on both sides argued children will be harmed if the judge's decision doesn't go their way.

A court in Medicine Hat heard arguments Wednesday on whether the legislation, which bars schools from telling parents if their children join GSAs, should be put on hold until there is a ruling on its constitutionality.

The Justice Centre for Constitutional Freedoms is seeking the injunction on behalf of dozens of faith-based schools, parents and public interest groups.

The Justice Centre argues that keeping parents out of the loop violates charter rights including freedom of religion and expression. It calls gay-straight alliances "ideological sexual clubs" that make graphic information on gay sex available.

Two of the parents who signed the complaint say their autistic teenage daughter joined a gay-straight alliance and was convinced to dress and act like a boy at school. The challenge says the girl became suicidal before her parents learned of "confusing influences" at school.

Cameron said while the intent of the law may be laudable, it doesn't set out what's appropriate for different age groups or provide protections for kids who have special needs or other vulnerabilities.

The Alberta government and others have argued that schools shouldn't inform parents if their children join the peer groups because there is the potential to "out" the students to guardians who may not be accepting.

Schools have until the end of June to file information to the government showing they are complying with the legislation.

The legal challenge was filed in April in response to the ban passed by Premier Rachel Notley's government late last year.

Cameron said the faith-based schools that are part of the application want speedy relief from the law so that they don't risk losing their funding if they refuse to comply.

He said some teachers and principals couldn't in good conscience do so.

"It would simply be unjust."

John Carpenter, a lawyer for the province, said he takes particular issue with the Justice Centre's characterization of gay-straight alliances as "secret societies."

"You shall not out children. It's as simple as that," he said.

Carpenter said LGBTQ students are particularly vulnerable to bullying, disrespect and abuse and have a suicide rate that's markedly higher than their peers.

"GSA clubs will help these children, children that I dare say are the children of the applicants in this courtroom."

A lawyer for the Calgary Sexual Health Centre, an intervenor in the case, said if the injunction is granted, there would be significant, tangible harms to LGTBQ youth in short order.

"Once a student is outed, it is impossible to undo it," said Brendan MacArthur-Stevens.

A big crowd showed up for the court challenge. The 50-seat courtroom filled up almost immediately, leaving more than 100 people waiting outside. Many of those attending were wearing buttons that said "Include Parents."

A handful of people demonstrating outside court in favour of gay-straight alliances carried signs that read: "GSAs Save Lives" and "Stop Your Hate."

Rob Wells said he was compelled to drive five hours from Vegreville because he was worried no one would be there to show support for LGBTQ youth.

"There has to be someone here to emphasize how important it is to have gay-straight alliance clubs in schools," he said.

Court of Queen's Bench Justice Johnna Kubik said she would deliver her decision in a timely manner, keeping in mind the end-of-month deadline for schools.