By Clothilde Goujard | News, Politics | June 26th 2018
#4 of 5 articles from the Special Report: Europe on Alert 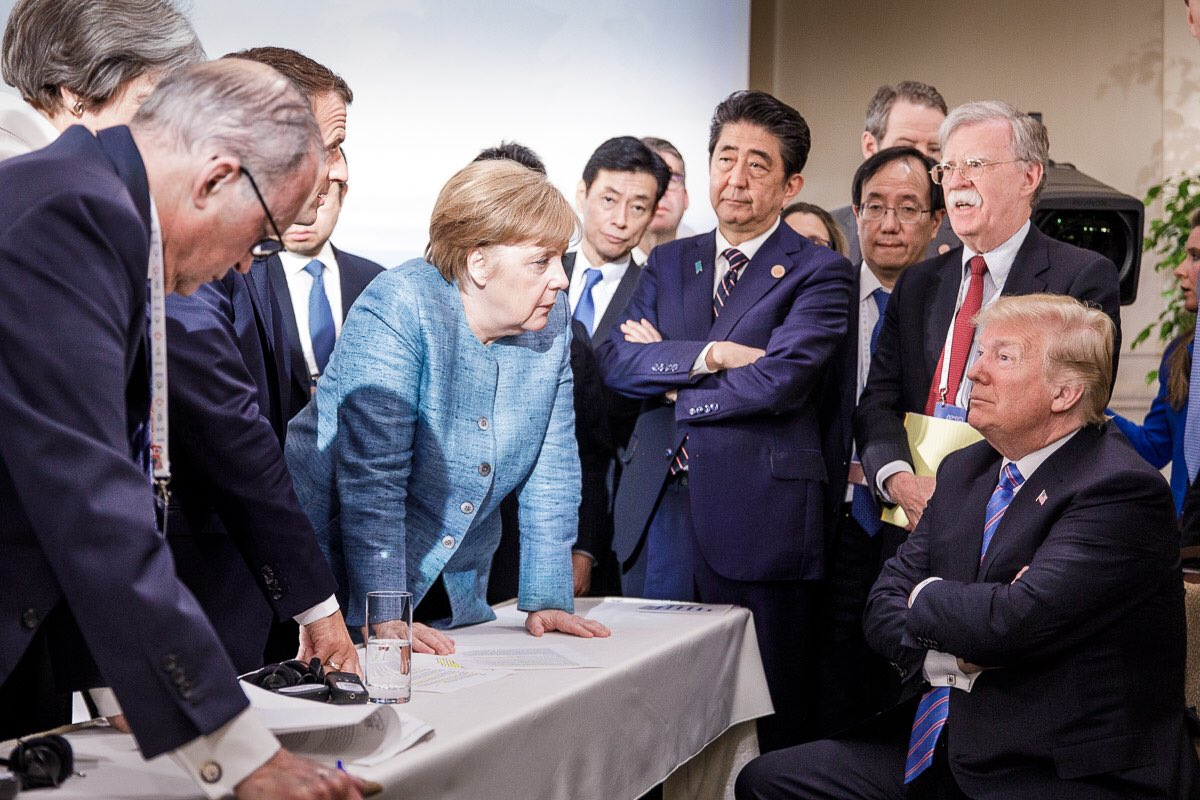 Donald Trump sits with his arm crossed after he is approached by a group of leaders during a break in G7 meetings in La Malbaie, Que., on June 9, 2018. Photo by Jesco Denzel, German government

Several years before Brexit and the election of Donald Trump, Yascha Mounk was troubled by a simple question: what if liberal democracies were on the verge of collapse?

It's a widespread belief that once democracy takes hold, citizen commitment to the system grows stronger with time.

However, as populist ideas gained ground in several European countries in the early 2000’s, Mounk, a Harvard political scientist born and raised in Germany, started to doubt the theory.

“I think part of it is having seen the slow rise of populism in Europe since the beginning of 2000 in places like Austria, in Italy with Berlusconi and this sort of feeling people weren’t taking it seriously enough as a phenomenon,” he said in a National Observer interview in Montreal.

Mounk counts himself as one of only a few political scientists who started studying the challenges faced by democracies in the West several years before a surge of interest in populism prompted by Trump's election to the U.S. presidency and the referendum to withdraw the United Kingdom from the European Union.

"Now some people are scrambling to move in that space," he said.

The end of democracy?

Mounk had studied history and examined examples of political regimes that seemed stable for decades or even centuries but that had become increasingly brutal and eventually collapsed. He mentioned that many scholars assumed the Soviet Union would remain stable. In Latin America, Venezuela was a democracy for several decades before two attempted military coups and the election of Hugo Chávez in 1998. The country then progressively slipped into an authoritarian regime with little or no political or press freedom.

In his opinion, if other political regimes, including communism, have collapsed, democracy might not be an exception.

“My hunch was always to be skeptical of the democratic triumphalism that’s pretty widespread today, or at least was widespread until a few years ago,” he said.

After several years of work, Mounk and colleague Roberto Stefan Foa released their study based on polls from the World Values Surveys between 1995 and 2014. The polls gathered data from citizens in European countries of Germany, Spain, and Sweden as well as the United States.

They found “deeply concerning” trends: citizens in several Western European and North American democracies had grown more cynical and distrustful about their political system and more willing to express support for authoritarian alternatives.

Mounk used different measures to explore the growing distrust of democracy: citizens' express support for the system; the extent to which they support key institutions of liberal democracy including civil rights and the vote; their willingness to advance their causes in their political system; and their openness to authoritarian alternatives including military rule. He found the results of these measures showed European and American citizens were becoming wary of their political systems.

Mounk and Foa found American citizens were becoming more open to authoritarian regimes. Their research showed a three-fold rise in the portion of Americans who think it would be a "good" or "very good" thing for the "army to rule." In 1995, one in 16 agreed with that statement compared to one in six in 2014.

Their research also showed senior citizens prized democracy much more than youth in the United States. About 72 per cent of Americans born before the Second World War rated living in a democracy as “essential” while 30 per cent of millennials, the generation born since 1980, did so, among those polled.

“I think young people are disappointed with democracy in many ways and on the economic front, they have the reason to be disappointed with it,” he said. “In many countries, older people have done very well. They bought houses 30 to 40 years ago when they were very cheap to buy. These houses appreciated a lot in value, they've had more job opportunities....And now, younger people have real trouble managing to stay in the same sort of economic class and circumstances of power. Few of them have the experience of really climbing up the occupational social ladder in the same way their parents did and I'm really worried about what that will mean for the future.”

But for him, economic reasons such as growing income inequality are not the only explanation for discontent with democracy. Mounk believes Western countries are also challenged by "national identity crises."

According to Mounk, the growth of immigration especially in European countries has sparked fear that migrants are a threat to cultural and religious heritage.

Is Canada an exception?

In 2017, an Ipsos immigration and refugees poll found 63 per cent of Italians and 56 per cent of Belgians felt strongly uncomfortable with changes brought on by immigration. In Canada, 40 per cent felt similarly. The survey of 17,903 people was conducted between June 24 and July 8, 2017.

Mounk said the United States has a slightly different "crisis of national identity." For him, Americans are more accepting of immigrants than Europeans but some feel threatened about what he called "potential end of white dominance over U.S. politics and popular culture."

While Mounk's interest focuses on European countries and the United States, his research also informs political scientists in Canada and other countries.

Peter Loewen, director of the School of Public Policy and Governance and associate professor of political science at the University of Toronto, has witnessed the wave of discontent with democracies in Western countries and started wondering if Canada was an "exception."

"I think there's a worrying trend going on about the ability of liberal democracy to maintain a consensus both around democracy and around open borders and open trade," Loewen said.

He noted, however, that Germany and Canada have conservatives parties that believe in open trade and high levels of immigration.

“If you take people's opinions on matters of trade and of immigration, the most frequent voter is the one who believes in open trade and open borders,” he said. “So no political party in Canada has an incentive to move off that open trade, open borders kind of consensus.”

Media in crisis: why Trudeau should step in to help democracy's watchdogs

What the UK can teach Canada about democracy

How power works in business

How power works in business and how it works in our minds and hearts needs to be talked about. Unscrupulous behaviour in the office is toxic and yet to raise this leads to a deafening silence. It is very difficult to apply right relationship to profit, and very difficult to persuade people that democracy and freedom is exchanged for efficiency which has no value for the health of humans. Our emotions are rarely acknowledged or discussed, in fact it is seen as weakness to admit to feelings. In developing a conversation among political scientists, politicians and economists we need to acknowledge how fragile we are when we don't feel safe.

The trend towards authoritarian populist movements indicates to me we have given up on humanity.

What democracy? The presumption here is that there's something there to decline or end. In the United States at least, and to a good extent elsewhere, that's just not true. Most of the time, people's beliefs are manipulated by politicized media (cf. "The Tawdry Fall of the Postmedia Newspaper Empire", here in the National Observer). To the extent that people nonetheless manage to have majority opinions that depart from what elites try to tell us to think, those majority opinions generally have no policy impact. Princeton studies suggest as much, Ralph Nader as far back as 2000 said that when he started agitating for things like safer cars it was possible if difficult to spread the world about some public interest phenomenon and have a policy impact, but it had gradually become impossible. He actually ran for President as a desperation move of sorts, since his normal approach to influencing public policy had become pointless. Corporate lobby groups like ALEC write legislation to be passed verbatim by legislators. How is this rule by the Demos?

To the extent that "democracy" is in decline, it's largely because people have started to intuit that it's not actually there. The assumption of popular SUPPORT for democracy is based on the idea of popular PARTICIPATION in democracy--that people will, if they have an impact on governance, like having that power and not want to give it up. But it's kind of moot if they don't, in fact, have that impact or power--what then do they have to lose?

I personally would wish people would support more left wing, socialist or social anarchist solutions, opposing empty "liberal democracy" with deeper democracy including economic democracy. Ultraright solutions, military coups and other fascist-style approaches, are empty (as well as being vicious and violent). But it's not a big surprise; there's a pretense to horror, but it's just like the media treatment of Trump as oppposed to Bernie Sanders (the former, lots of air time, the latter ignored as much as possible): Our power structures don't like fascism all that much, but if there's going to be a rupture, they'd rather fascism than even a modestly left-ish redistributive government. Fascism is kind of a safety valve--if people get too dissatisfied with the status quo, point them at fascism or fascism-lite for some "solutions" that don't do much to anyone who matters (ie is rich).