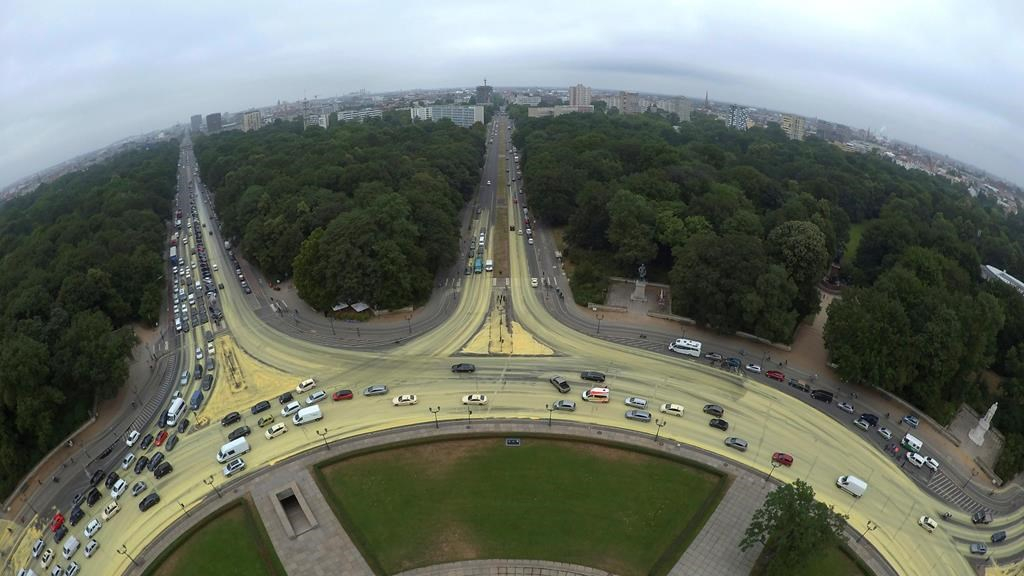 The roundabout at Berlin's landmark Victory Column is poured by thousands of liters of yellow paint, delivers by Greenpeace activists as a protest to promote solar power over coal, in Berlin, on Tuesday, June 26, 2018. Photo by Paul Zinken/dpa via AP
Previous story
Next story

Representatives from German industry, environmental groups and unions met Tuesday in Berlin to discuss how and when the country can stop using coal to generate electricity.

Climate scientists have called for Germany to do more to curb its greenhouse gas emissions, which have stagnated for about a decade. This month, the government was forced to admit it will miss its short-term climate goal by a wide mark .

Coal-fired power plants are a major source of carbon emissions that drive climate change. While Germany has ramped up production of renewable energy, it still depends on coal for over a third of its electricity.

The government-appointed committee has six months to agree on a report for Germany's exit from coal. While the report won't be binding, the idea is that with all interested parties involved the government will be able to use the report as a template for its decisions, taking much of the sting out of a politically sensitive debate.

Coal mining has been a way of life in parts of Germany for centuries, not to mention a source of profit for industry, and it's unclear how lost jobs will be replaced. In the eastern region of Lusatia, billions of dollars (euros) have been spent over the past decades to turn former coal pits into an artificial lake district with the aim of boosting tourism, but authorities concede this alone won't keep the local economy afloat.

The process is being closely watched by other countries, particularly in Eastern Europe, that also depend heavily on coal for their energy mix.

Martin Kaiser, head of the Greenpeace office in Berlin and a member of the 28-strong committee, said the government's failure to make difficult decisions on curbing emissions in the past has increased the pressure going forward.

Germany's energy quandary is compounded by the fact that its nuclear power plants are being phased out by 2022. Natural gas could be used to fill the gap until the country's electricity grid can cope with the fluctuating levels provided by renewable energy, said Kaiser.

Greenpeace activists poured thousands of litres of yellow paint onto the roundabout at Berlin's landmark Victory Column in a bid to promote solar power over coal. Police were investigating the stunt, saying it constituted a "dangerous interference with traffic."