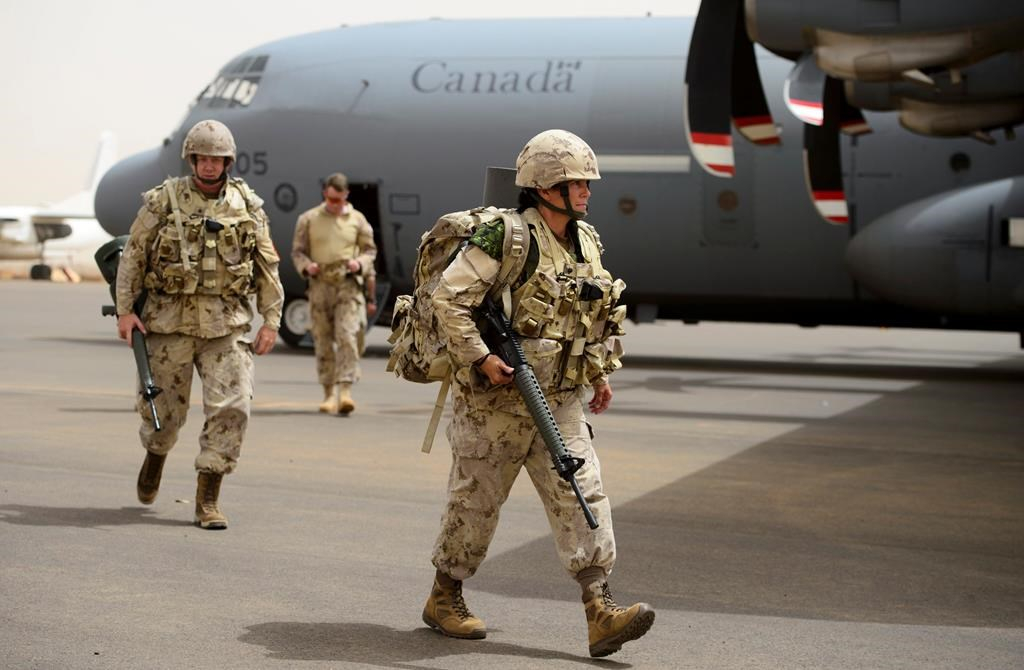 Canadian troops arrive at a UN base in Gao, Mali, on Monday, June 25, 2018. Photo by The Canadian Press/Sean Kilpatrick
Previous story
Next story

The German helicopter crews being relieved by Canada's peacekeeping mission in Mali say they have struggled with delays in getting approval for life-saving medical evacuations as pennywise UN officials wrangle over cost.

Some of those delays have lasted hours, they say — time that could mean the difference between life and death for injured peacekeepers in Mali's harsh environment and barren landscape.

A second contingent of Canadian soldiers flew into the dusty, sun-baked airstrip here Monday to get ready for the arrival next month of the eight helicopters Canada has pledged to the UN mission in Mali for the next year.

As the sweaty Canadians unloaded their gear at a nearby UN base in the surprisingly sticky heat, moving into the tents and barracks that are their new homes, a number of German soldiers sat and watched from the shade.

Germany has a sizable presence at the UN base in Gao that includes a detachment of NH-90 helicopters, bolstered by several similar aircraft from Belgium, for evacuating injured peacekeepers from the field.

Those Belgian helicopters were on display Monday as they returned to base and landed within the fortified perimeter only long enough to take on some fuel before taking off and disappearing into the distance again.

But both Germany and Belgium will officially end their medical-evacuation missions on Saturday, at which point the NH-90s will be packed up and returned home to make way for their Canadian counterparts.

Many of the Germans here previously served in Afghanistan, and while they say there are many similarities, there are also key differences, starting with the fact they have not fired a single shot or taken any fire.

That may seem odd, given the peacekeeping mission's deadly reputation, but it reflects the fact most of those killed have been blue helmets from less developed countries caught in ambushes and roadside-bomb attacks.

While the Germans and Belgians have not been attacked, they are there to help with the aftermath; over the past 18 months, they have evacuated 43 wounded—— peacekeepers from the field over the course of 16 flights.

While the number of flights may not seem high, Col. Andreas Schwartz, one of two emergency physicians responsible for treating patients on the helicopters, says the patient-to-flight ratio far surpasses what was seen in Afghanistan.

There are many other differences between the UN mission in Mali and Afghanistan, where NATO was in charge, said Lt.-Col. Kai Eggert, chief of operations for the multinational helicopter detachment.

Those include the heat and isolation in Gao, where it can take weeks to get spare parts, a lack of radios among some contingents from less developed countries, and the absence of exchanges of fire.

"We never received any fire from ground forces," Eggert said as he stood next to one of the Belgian NH-90s where it was protected from the sun inside a large hangar.

"Quite the opposite — what we experienced is whenever we brought up a helicopter on scene, it was enough of a show of force and the terrorist armed groups ceased fire and vanished into the desert."

Yet one of the most surprising differences, says Eggert, has been how the Germans have often been forced to wait hours before the UN headquarters in Bamako gives them permission to fly to the scene of an attack.

When a UN convoy or patrol is attacked, the request for help must follow a chain that runs from the unit commander on the ground through various other commanders and back to the UN headquarters in Bamako.

While that alone can take a long time, given patchy communications networks and the vagaries of the UN command system, military and civilian officials must then meet to discuss whether to send a military or civilian helicopter.

That discussion can also take time — in part, the Germans say, because one of the key factors is cost, requiring various calculations to determine the most cost-effective option.

While Lt.-Col. Sebastian Koehler, commander of the multinational helicopter detachment, acknowledged both the challenge and frustration of such delays, he also noted that the UN is under pressure to be cost-conscious.

The UN has faced more scrutiny than in the past to account for its spending because of past corruption as well as shrinking budgets, particularly as the U.S. has cut its funding for peacekeeping.

The impact is nonetheless clear as the Germans and Belgians have faced waits of up to 17 hours before launching a mission, which Schwartz, in his capacity as an emergency physician, says is "not tolerable."

"The time between the incidents and the first treatment decides the outcome of the patient," he said. "So of course we want to be launched as soon as possible, no matter about any financial aspects or whatever."