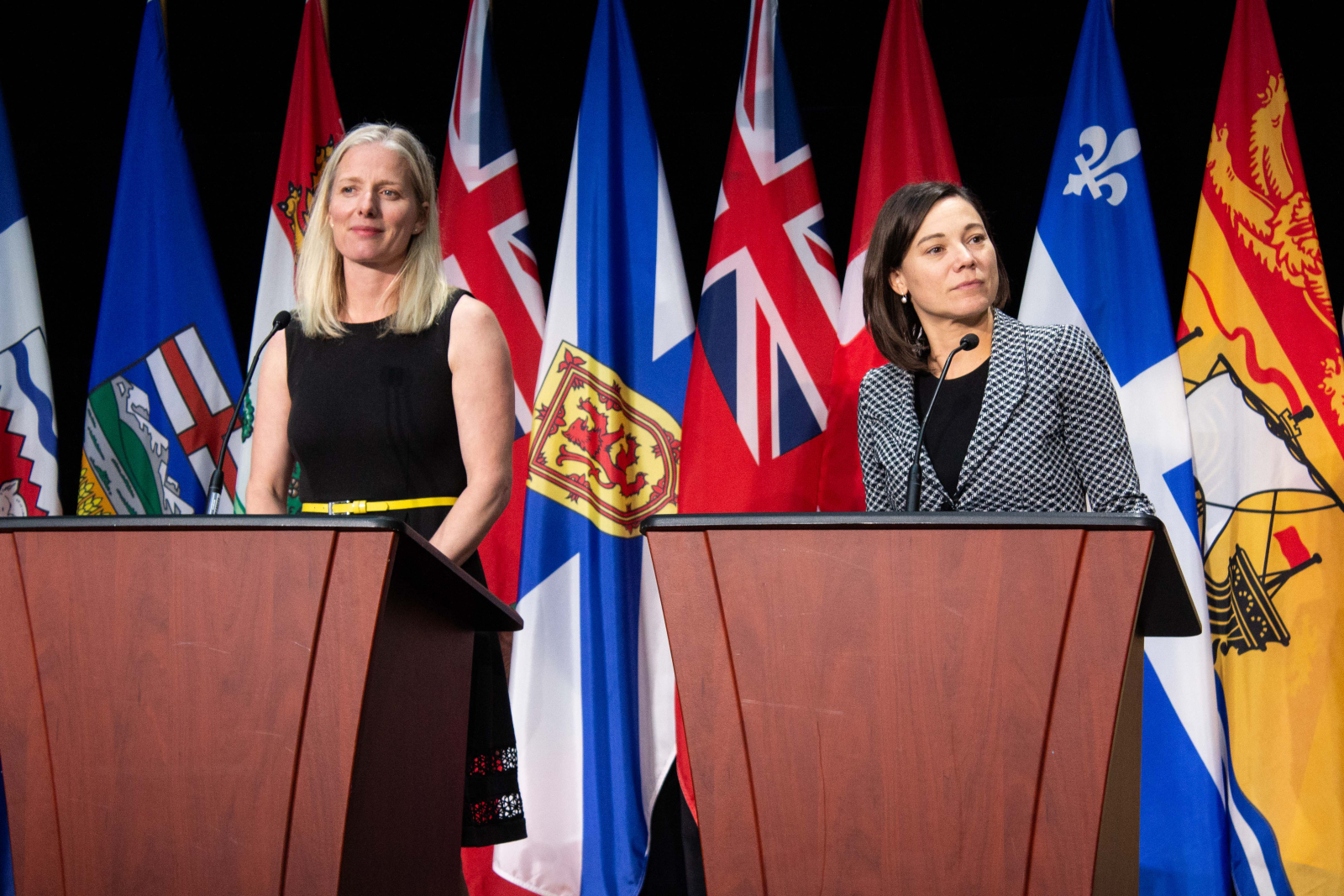 But at a press conference after meeting with her provincial and territorial counterparts, the minister couldn’t provide specific details about how Canada intends to add an area roughly the size of Saskatchewan to its protected jurisdiction, within 18 months.

McKenna met her counterparts in Ottawa on June 28 to discuss the biodiversity plan and announced details on a “national advisory committee on nature,” that would inform her how to spend a wildlife conservation fund the Trudeau government first announced in February.

Canada has struggled with a loss of biodiversity that has accelerated since the 1970s. The country committed eight years ago under the United Nations Convention on Biological Diversity to protect at least 17 per cent of its land and freshwater by 2020.

Ottawa has only been able to conserve 10.55 per cent so far, and the Canadian Parks and Wilderness Society has warned that this progress lags behind most of the rest of the world.

Appearing alongside Alberta Environment Minister Shannon Phillips after the ministerial meeting, McKenna was asked whether Canada has a plan to achieve 17 per cent protection by 2020. She said she was “committed to working with provinces and territories, with private landowners, with our partners” to make that happen.

“We needed to have a meeting because we needed to identify areas that we can move forward to protect,” said McKenna.

“Some of those areas are under active consideration. We have foundations here that we brought together so that we can make deals. We also have Indigenous peoples who are huge participants in this...they’ve come to us with proposals.”

Ottawa is putting $500 million into the fund, which the government says will support species protection efforts and help build Indigenous capacity to conserve land. The first phase of the fund will provide roughly $300 million over five years.

McKenna and Phillips pointed to a “quick start” component to that fund — essentially a mandate to roll out “nearly-ready projects” this summer. “That was really important to Alberta to be able to move forward on some of the things that we know are in the queue and do require support,” said Phillips.

The federal environment minister’s office said McKenna will appoint members to the nature advisory committee as well as a “special ministerial representative” to chair the committee by the end of 2018.

Meanwhile, a call for proposals for the nature fund will be going out “in the coming months” to identify initiatives. McKenna is also expected to announce more details of the fund over the next two months.

At 44,741 km, Wood Buffalo National Park is Canada's largest national park and one of the largest in the world. Today, I am proud to announce $27.5 million in funding to support the development of an action plan to secure the future of this site https://t.co/KYf32MPvwI pic.twitter.com/YZ2HUpQFa3

The appearance by McKenna and Phillips comes the same day as McKenna's office announced, in a separate statement, that the federal government is committing $27.5 million over five years for "the development of an action plan to secure the future of Wood Buffalo National Park," a UNESCO World Heritage Site since 1983.

The money comes the same week as a Canadian Press report detailed federal documents showing an environmental assessment of the park showing oilsands activity, hydro development and climate change are altering its environment.

Wood Buffalo straddles the border between Alberta and Northwest Territories, north of Fort McMurray, Alta. At 44,741 km it is Canada's largest national park, a vast expanse of grasslands and wetlands housing billions of migratory birds.

It is the world's only breeding ground for endangered whooping cranes and home to the largest herd of free-ranging wood buffalo left anywhere. First Nations have depended on the area for generations for cultural and physical sustenance.

The report says hydroelectric development, oilsands, pulp and paper facilities, industrial mines, forestry and municipal development are all likely to affect the park in future.

McKenna also addressed a recent National Observer story describing a scientific study that published evidence that the logging industry is spreading a campaign of denial about the disappearance of boreal caribou.

Canada's woodland caribou herds and their habitat keep declining, with industrial disturbance increasing in dozens of caribou ranges, despite provinces being ordered in 2012 to develop plans under Canada's Species At Risk Act to protect critical habitat needed for the caribou to survive.

McKenna said the government knows it needs to take measures to protect boreal caribou. "There were good conversations about how we’re advancing that with the provinces, where there is a significant concern," she said.

"We need to be bringing everyone together. That means industry as well, because under our Species at Risk Act...if the provinces don’t act, then the federal government will be called to come in and act under more extreme measures, which will have unintended consequences impacting on industry.

'So I certainly hope that industry would come to the table — and many of them have — to say 'OK, we’ve got a problem.’”

Here is the link to the BC

Here is the link to the BC program for Caribou Recovery https://engage.gov.bc.ca/caribou/
There are many comments on the webpages that tell the story here. Worth a read.

I have been under the

I have been under the impression that in a national park no development is allowed. No oil sands, no hydro. What does a national park really mean then? Why do we need this gigantic amount of money or all these people on an advisory council, who I assume are being very well paid? I would have thought that some park rangers to police and perhaps keep watch for invasive species paid out of the funds that it costs investigative biologists ,other scientists and the public to access the park would have pretty well taken care of the cost. Barring wildfires which really are natural, floods as well, if this is a natural area what are all of these people and councils doing? Please Mr. Meyers at some point tell me what a natural, national reserve is all about.

The world of corporations

The world of corporations seem to be so disasociated with any mandate to evolve their work on our Planet towards true sustainablity which I feel involves moving rapidally towards living within the ecologial contraints of our Planet. This is the only way that the human species will ultimately survive is to fit back in to living within and supporting the life forces of our Planet which provide the balances within the principles of biodiversity that keep us all alive.
Our human species needs to evolve into more than just a "cancer" on other living species of this Planet that we share.
If the shareholders of these corporations can't find ways to dedicate and divert small percentages of their profit towards these outcomes then governance must lead by legislating and regulating the processes needed to provide the habitat to keep other species living on our shared landscape.
If not, then I believe that our Grandchildren, in a push to save what little of the natural world we have left to them, will demanding and work for that Laws to protect the environment includes "crimes against the environment" that will regulate this "corporate greed"