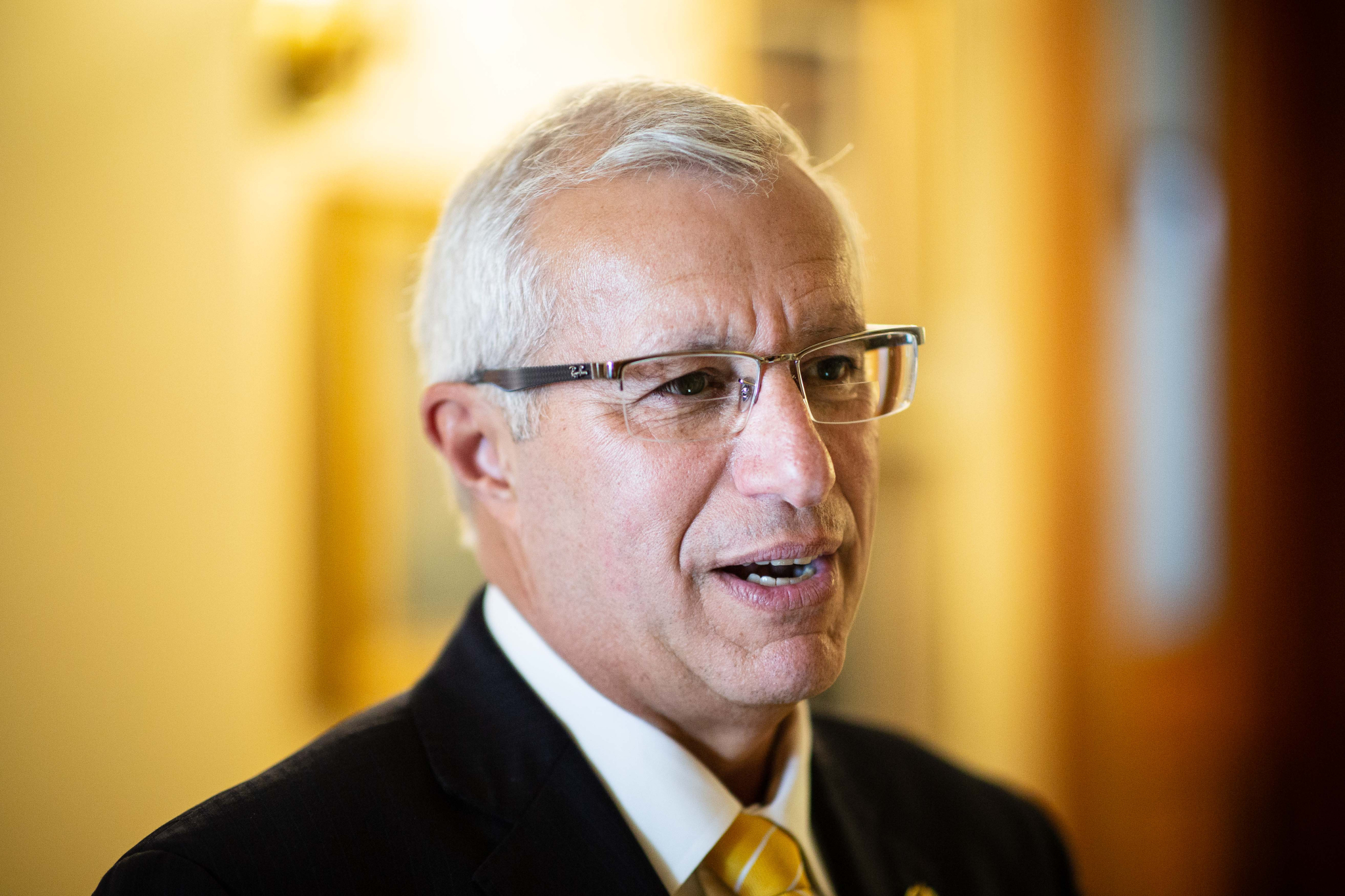 Ontario Finance Minister Fedeli after being sworn in as Minister of Finance at Queen's Park on June 29, 2018. Photo by Alex Tétreault
Previous story
Next story

Ontario’s new finance minister says he believes that withdrawing the province from the cap-and-trade carbon market signals that Ontario "is open for business."

Vic Fedeli was the third member of Doug Ford’s new Progressive Conservative cabinet sworn in on Friday after the premier and his deputy Christine Elliott. He was elected MPP of Nipissing in 2014 and served as interim party leader following Patrick Brown's resignation in January. He previously served as energy critic for his party when the Liberals were in power.

As minister of finance he will help oversee two key campaign promises: searching for savings in provincial spending and ending Ontario's participation in the carbon market with Quebec and California.

Ford declared scrapping the climate policy as his first policy decision, followed by lowering gas prices, and finding “billions of dollars of savings for Ontarians.”

“I think you heard very clearly from Premier Ford today that what we need to do is open up the books in Ontario to get an understanding of where the province truly sits,” Fedeli said in an interview with National Observer. “Now we were once the engine of confederation and today we are no longer in that position.”

Fedeli said the previous Liberal government had created policies that saw an exodus of 300,000 manufacturing jobs in the province and created some of the highest energy rates in North America.

“We have real issues that need to be resolved,” he said. “A lot of them will be financial.”

Fedeli said elimination of the cap-and-trade policy would “help encourage businesses to reconsider Ontario.” And he said it was a way to reduce the price of gasoline, although he did not explain how specifically.

Innovation, not government, is the way to carbon emissions, says minister

The Conservatives refer to cap-and-trade as a tax although it is not a tax. It's a market trading system for carbon emissions under which the previous government raised $3 billion in revenues for emission-reducing initiatives such as home retrofits and electric vehicle subsidies, as well as support for clean technology initiatives.

The move has already provoked some market uncertainty and questions from the energy industry, National Observer reported on June 21.

Fedeli dismissed the criticism and warnings from the opposition parties that the new government's plans would wind up costing the province more money.

“There's not a single item that you touch in a day that didn't have its price increased because of the cap and trade tax,” Fedeli asserted. “By eliminating it, not only is that burden removed from families but it's a clear signal sent to the business community that a Doug Ford Ontario is open for business.”

Fedeli added that the government has never led climate change innovation. “It's been the business community that have led in the greenhouse gas reductions right across Ontario,” he said. “It's their innovation that has always been the answer, not government.”

Moving forward, Fedeli’s says his first steps will be to get familiar with his new office and staff at Queen’s Park.

He expects to find confirmation of the same problem Ontario’s auditor-general found in December 2017: that Ontarians were overpaying in their hydro bills to the tune of hundreds of millions of dollars.

“We need to fix that and we will.”

It's true that GHG emissions

It's true that GHG emissions in the Ontario industry sector went down (- 28%) between 1990 and 2015. It's surely the result of technical innovations and efficiencies, but it may also be the result of the decline of the manufacturing sector in Ontario.
The two major sector were emissions have gone up significantly during that same period are the transportation sector (+34%) and the building sector (+32%). The increase in the transportation sector is the result of an increase in freight transportation (+117%) and passenger transportation (+13.8%). The growing emissions in passenger transportation is the result of people choosing to buy bigger vehicles, particularly pickup trucks, and large vans and SUVs.
(source: "Ontario's Climate Act From Plan to Progress", Environmental Commissioner of Ontario, January 2018)
If Doug Ford is sincere when he talks about "coming hard on polluters", he should not cut gasoline prices which will only encourage people to drive more, and he should not cut the Ontario Green Fund that was helping homeowners to reduce their carbon footprint and save money.

How do we encourage Mr.

How do we encourage Mr. Trudeau to cut back on his extraordinary use of fossil fuels? If his personal carbon footprint was measured, surely it would set a modern day record. Isn't he the one who promised to wean Canada off of fossil fuels?

Open for what kind of

Open for what kind of business? He appears to have chased away the "green" ones.