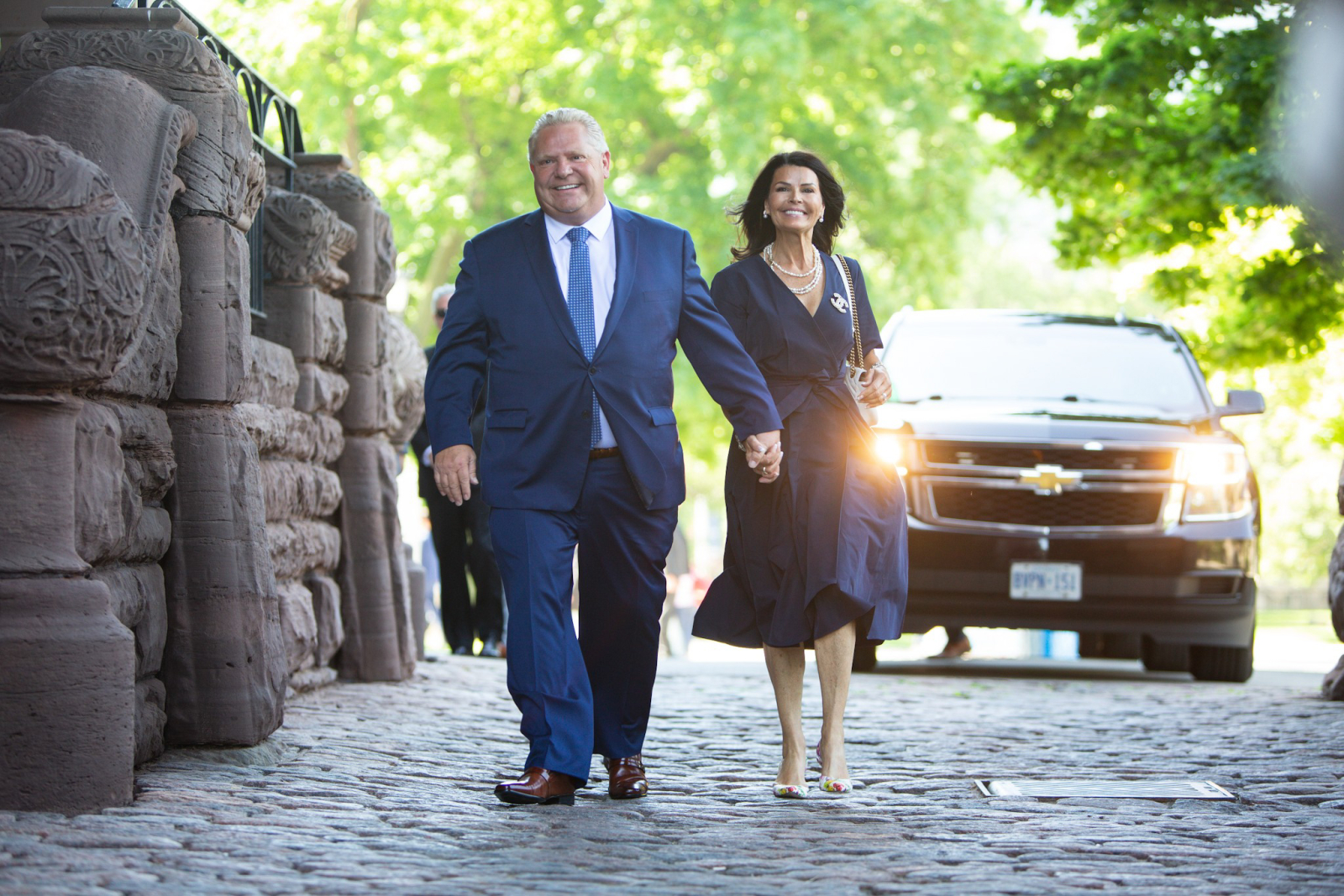 Doug Ford arrives at Queen's Park with his wife Karla, to be sworn in as Ontario's 26th premier on June 29, 2018. Photo by Alex Tétreault
Previous story
Next story

About 1,000 people waited for hours under the sweltering sun on Friday in Toronto for one glimpse, one handshake, one selfie with their new premier, Progressive Conservative Doug Ford, who pledged throughout the day to work “for the people.”

When Ford, visibly hot in suit and tie, waded into a dressed up crowd after officially becoming the 26th premier of Ontario, wellwishers asked him to remember the disabled, to do something about condo prices, to work hard and fight for them.

“Don’t forget us,” yelled one woman. “I could never forget the people,” Ford yelled back.

Premier Doug Ford, wearing a sweat-ridden jacket, met the people after being sworn in at Queen's Park, promising to never forget them. pic.twitter.com/eK7lOYYJyE

Mulroney, Elliott and Phillips in cabinet

In a speech on the footsteps of the legislative assembly, he mentioned “the people” fifteen times after swearing his oath of office twice.

He unveiled a cabinet of 13 men and seven women, appointing his rivals in the leadership race to top jobs, along with other familiar faces from the business world and politics.

Runner-up Christine Elliott is deputy premier and health minister. Caroline Mulroney is the attorney general and is responsible for Francophone affairs. Vic Fedeli, who was interim leader after Patrick Brown resigned in January, is the new finance minister.

Rod Phillips, a former chairman of Postmedia and former chief executive of the Ontario Lottery and Gaming Commission, is the new environment minister. Former federal cabinet minister Greg Rickford, who served as natural resources minister in the Harper government, will be the new minister of energy and Indigenous affairs.

"I will never forget why I'm here: to work for the people of Ontario," @fordnation said in his first words as the province's new premier. #onpoli #cdnpoli

The ceremony inside the legislature was witnessed by Ford's family, Toronto Mayor John Tory, his newly-minted cabinet ministers, and several former premiers, including Ernie Eves, Mike Harris and Bob Rae. The second swearing-in was outdoors. Among his family members was Renata Ford, his late brother’s widow, and her children.

The events marked the official end of 15 years of Liberal rule in Canada's most populous province. One-third of the 76 members of the Progressive Conservative caucus are women, and 48 are novice MPPs, including Ford, a one-term Toronto councillor.

Ford has called the legislature back July 9 for a short session with a restructured cabinet. He has scrapped the ministries of Citizenship and Immigration and Innovation and Science and merged others.

To huge applause and cheers, Ford affirmed his first policy change is Ontario’s withdrawal from the cap-and-trade carbon market with Quebec and California. He highlighted pledges to lower gas prices; audit government spending with the aim of finding “billions of dollars of savings;” and support the federal government in renegotiating the North American Free Trade Agreement.

“We must put aside political differences, no matter if it's red, blue, green, or orange. It doesn't matter, because this is about the people,” he said.

Doug Ford is meeting the people.
"I waited 10 years for you"
"No party status got the Liberals"
"Thank you. You are our leader"
"Make the CN tower blue"
"Nice speech"
"God bless you" pic.twitter.com/TRFIUNRhYK

“I hope your decision to remove ‘climate change’ from the Ministry of the Environment is not an indication of your commitment to addressing the climate crisis,” Schreiner said in a statement.

“There is only one member from a visible minority group, which is in stark comparison to the four million Ontarians who identify as such,” he said.

That one member is Raymond Cho, the oldest member of the PC caucus and now minister for seniors and accessibility.

"Doug Ford's decision to make the minister of energy a part-time job is devastating for families who have been struggling for years to keep up with soaring hydro bills," Singh said in a statement. "This decision shows that Mr. Ford is not planning to tackle the hydro mess that the Liberals left Ontarians in and leaves families who are already squeezed by sky-rocketing hydro bills to worry."

“Our caucus will be watching the government very closely to ensure the proper time and attention is being given to issues important to all Ontarians,” Fraser said.

Some in the crowd shared his apprehension. “Why are you scrapping the carbon tax?” a young man wearing an NDP badge yelled from the rope line.

“He keeps talking about being able to find all these billions of dollars in inefficiencies in the government and I just don't see that being feasible,” she said. “I think the result is going to be just cut cut cut cut cut – cut healthcare, cut teachers, so I'm just not looking forward to that.”

Elizabeth Littlejohn, a Toronto sustainable design professor, was concerned about the future of climate change in Ontario, and questioned what would happen to food production in Ontario and the green belt lands.

But on Friday, Ford supporters outnumbered his critics. The diverse crowd was ecstatic to be part of his historic moment, with children squealing “I handshaked him, I handshaked him.” Many said they had been waiting for this moment for years.

In the loud crowd, Ford shared a quiet moment with one senior man who reached out to shake his hand and said “Hi Rob.” The man shook his head and apologised. Ford, smiled, told him its okay, and gave him a hug as the crowd continued to chant his name: “Doug, Doug Doug.”

Editor's note: This article was updated at 11:16 a.m. on June 29, 2018 to correct the spelling of Rod Phillips. It was updated again at 4:15 p.m. with details of the swearing-in ceremony and additional reaction from Premier Doug Ford and opposition politicans.