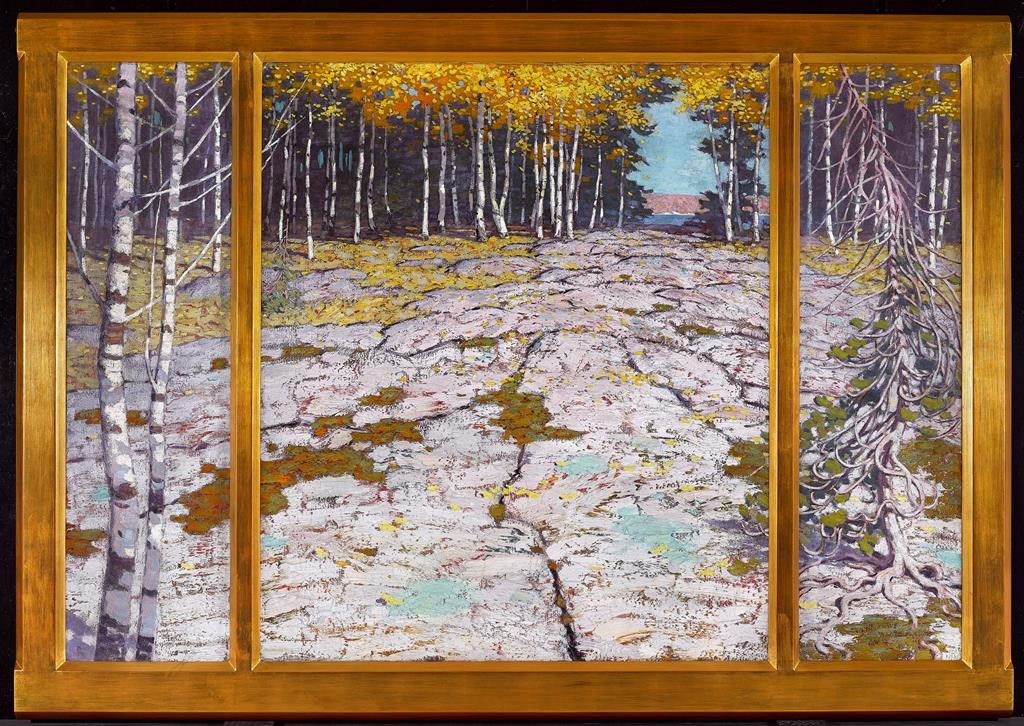 "The Pines" by artist Robert Houle at The Art Gallery of Ontario. Handout photo by Craig Boyko
Previous story
Next story

The curatorial team tasked with re-envisioning the Art Gallery of Ontario's permanent collection of Canadian and Indigenous works says the overhaul signals a creative culture shift for the Toronto institution.

Georgiana Uhlyarik and Wanda Nanibush said they sat in a park last fall and sketched out a vision for a collection that would break from institutional custom not only in its display, but its conception of Indigenous-Canadian artistic relations.

The result is the rebranded J. S. McLean Centre for Indigenous & Canadian Art, set to reopen Sunday after months of renovation, featuring 132 works spanning the country's cultural heritage, 40 per cent of which were created by Indigenous artists, according to numbers provided by the gallery.

"It's a major shift," Nanibush, curator of Indigenous art, told reporters during a preview of the collection Tuesday.

"Everything is kind of up for grabs for a reconfiguring based on both of our needs, as opposed to just assuming the way the institution does things is the right way."

Rather than presenting the works in chronological order, Nanibush said much of the collection has been arranged thematically to foster a cross-cultural conversation between Indigenous and Canadian art across generations.

Each work will be accompanied by texts in three languages – English, French and either Anishinaabemowin or Inuktitut – and will state the Indigenous names of treaty territories and disputed lands.

The interplay of Indigenous and Canadian works in each room often accentuates the reciprocal influences, and at times, conflicts, between the two esthetic traditions, Nanibush said.

For example, Anishinaabe artist Robert Houle's pointed portrayals of Indigenous sovereignty are displayed opposite to seminal Canadian landscapes by the Group of Seven's Lawren Harris. Both artists are abstractionists, Nanibush said, but the juxtaposition of their works allows Houle to subvert the "nationalist" narrative imposed on Harris and interrogate settler claims to the land he so masterfully depicted.

"There are also moments when you have two artists together that really, to me, speak to what it means to have an artistic community," said Uhlyarik, who is the curator of Canadian art. "These paintings are full of information that we continue to live under to this day."

New collection @agotoronto ‏has been arranged thematically to foster a cross-cultural conversation between Indigenous and Canadian #art across generations. ‏ via @NatObserver

To make up for the lack of Indigenous representation in the AGO's vast Canadian collection, Uhlyarik said many contemporary works were either acquired or borrowed in anticipation of this weekend's unveiling, including one purchase apparently so recent that she paused Tuesday to wonder if the invoice had been paid.

Some art buffs may notice that several Canadian "icons" are missing from the revamped McLean Centre, said Uhlyarik, with some paintings by Group of Seven-adjacent artists Emily Carr and Tom Thomson having found a new home elsewhere in the gallery, while other pieces were tucked away into storage.

Assume people will fall in love with the artists

"We may get in crap for that," Nanibush deadpanned to her colleague, but when pressed, she struck more equivocal tone.

In addition to a gallery featuring a rotation of solo exhibitions mostly by artists of colour, Nanibush said parts of the centre will exclusively display Indigenous-created works, serving as a vital incubator for intercultural expression.

It also marks AGO's fifth space dedicated to Indigenous art, which Nanibush acknowledged as a "big change" from what was formerly a single hallway.

"Fundamentally, colonialism is about land," said Nanibush. "Real estate in the building does matter in terms of what an institution's commitments to Indigenous artists are."

In keeping with the curatorial shift, Nanibush said she and Uhlyarik think of the AGO's Inuit art and sculptures not as works the gallery owns, but a collection to be held "in trust" for the Indigenous community to whom it actually belongs.

"And that, let me tell you, the institution feels very uncomfortable about," Uhlyarik added.

Nanibush said she hopes gallery-goers walk away from the centre with an enriched appreciation of the complex history that has shaped the country's artistic expression, as well as newfound enthusiasm for the contemporary Indigenous artists she believes are poised to carve out Canada's creative future.

"We follow the artists' lead," Nanibush said. "They've tapped into the future that's present right now, so as they look, we get to look with them."

'It's strength:' Indigenous women's art displayed on billboards across Canada