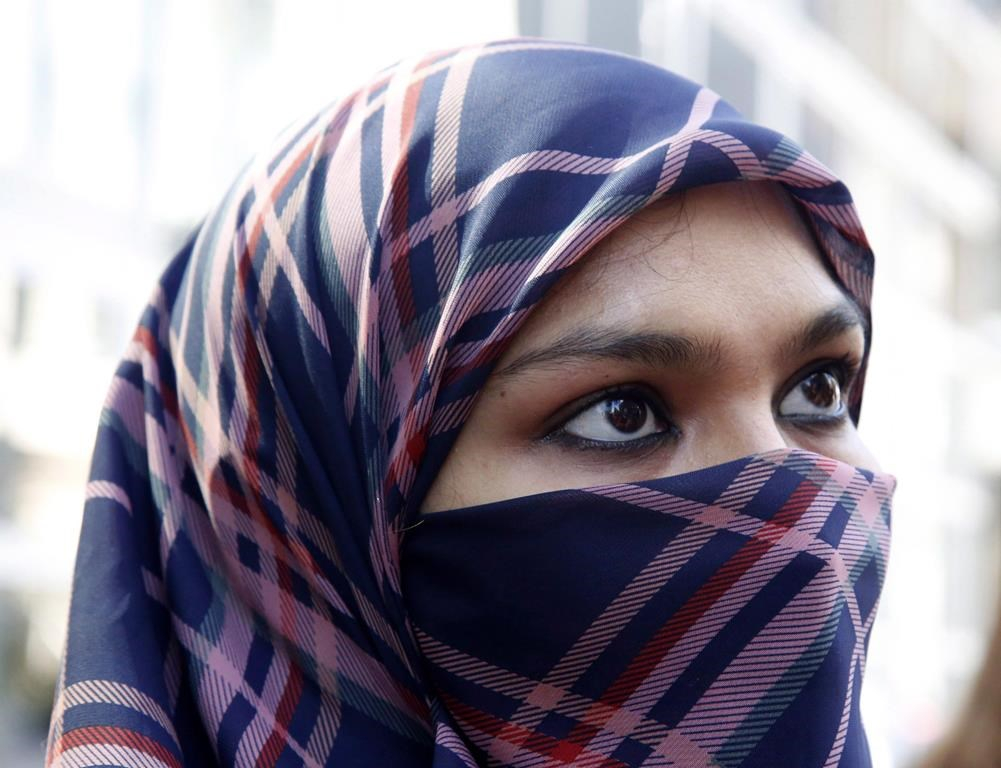 Zunera Ishaq, who fought for the right to wear her niqab while taking her Canadian citizenship oath, speaks with reporters outside the Federal Court of Appeal in 2015. File photo by The Canadian Press
Previous story
Next story

Few laws have caused as much confusion and criticism as Quebec’s Bill 62 — the province's religious neutrality law — proposed by Premier Philippe Couillard's Liberal government and passed in October 2017.

The highly contentious legislation, which was voted in at the provincial legislature with 65 votes in favour to 51 against, would make it illegal for Muslim women, or anyone else who covers their face to receive public services, including riding public buses or receiving care at a health clinic.

Bill 62, also known by its less reader-friendly name, An Act to foster adherence to State religious neutrality, and in particular, to provide a framework for requests for accommodations on religious grounds, was the brainchild of Quebec Justice Minister Stéphanie Vallée, who first tabled the bill in 2015, after years of heated debates that went nowhere.

To some, it’s seen as a compromise most can live with. To others, it's an infringement and violation of basic human rights. But to many, myself included, Bill 62 was a confusing and half-baked attempt to pacify those who view religious face coverings as an affront to gender equality, and penalized a small minority of women who are already marginalized and discriminated against.

The news, therefore, that the controversial section of the law that bans face coverings when accessing public services has been suspended by a Quebec judge – for a second time – was met with relief by many, and seen as a win for basic human rights and religious freedom. I include myself among Quebecers who are happy with the news.

Religion-averse Quebecers (and trust me, as an atheist, I’m one of them) who erroneously think that such a bill will emancipate women and communicate Quebec society’s egalitarian and secular values, are not defending these women or protecting them in any way.

“Quebec's law banning people from covering their faces when receiving or giving a public service cannot enter into force until it goes through judicial review because of the irreparable harm it will cause Muslim women, a judge ruled Thursday,” reads a Friday report by The Canadian Press.

Last December, a Quebec Superior Court judge granted the National Council of Canadian Muslims and Canadian Civil Liberties Association, which challenged the law in court together, an interim stay on the bill's enactment. At the time, the judge ruled that the legislation could not be enforced until the Quebec government released clear guidelines on how it would be put into practice, and how someone could apply for an exemption to the rules for religious reasons.

In May, those official guidelines were released, and the fears of many human rights advocates were realized: the government, admitting that one-size-does-not-fit-all, had shifted the burden of deciding on religious accommodations out of its own hands, and into the hands of public agencies.

The Canadian Labour Congress has reacted strongly to the bill and its ambiguous guidelines, calling it "clearly discriminatory and puts workers in an untenable situation."

“Every Canadian is fully entitled to the rights promised to them under the Charter of Rights and Freedoms, as well as provincial human rights codes,” said CLC President Hassan Yussuff in a news statement last October.

“It’s wrong to ask workers to participate in the violation of those rights – especially while delivering the public services every Quebec resident is entitled to receive."

The danger with the government's guideline approach, is that it naively assumes good will and fairness will prevail after arming everyone from bus drivers, to police officers and healthcare personnel, with the power to decide how people will be treated. Not only is it unfair to many of these public workers, who didn’t sign up to assess and make snap judgments about people based on such vague criteria — it opens the door to abuse and publicly-sanctioned discrimination if someone with the authority to deny services is biased or Islamophobic.

Based on many of these concerns, the National Council of Canadian Muslims and Canadian Civil Liberties Association returned to court last week to argue that these guidelines were inadequate. Following their testimony, Quebec Superior Court Justice Marc-André Blanchard said that Section 10 of Bill 62, which relates face coverings, appears to be a “violation” of the Canadian and Quebec charters on rights and freedom, which “provide for freedom of conscience and religion.”

A win for human rights and religious freedom

“We welcome the decision to grant a further stay against this law as a victory for religious freedom and human rights in Quebec, and in Canada,” said Ihsaan Gardee, executive director of the National Council of Canadian Muslims in a press release issued on June 29. “Although the constitutional legal challenge is not yet complete, the significance of this decision is not lost on Quebec Muslims, specifically the small number of Muslim women who choose to wear the niqab in accordance with their sincerely-held religious belief, and whose everyday activities would have been impacted had this law gone into effect on July 1.”

“During this legal challenge, we’ve exposed this unconstitutional law for what it is and this stay order is a recognition of that reality. We look forward to a full hearing on the merits of case and we welcome the Court’s decision which recognizes this law’s damaging and irreparable harm to an already vulnerable minority of Muslim women,” added Canadian Civil Liberties Association director Michael Bryant in the same press release.

I have made no secret of the fact that I feel that there is nothing feminist or liberating about Quebec’s Bill 62. Forcing a woman to remove her face covering is just as regressive as forcing her to wear one. This legislation is nothing more than body-policing; something women around the world and throughout history have been subjected to and continue to be penalized for on a routine basis.

There is absolutely no justification for forcing someone to remove a piece of clothing, if it doesn't pose a security or identification problem.

"A lot of the thinking behind these laws is that they're 'saving' these women, and that's not the case at all," said Catherine McKenzie, the National Council of Canadian Muslims' legal counsel, reached by phone. "You quickly see when you speak to them that these women feel that their freedom of choice is being taken away from them."

All this highly discriminatory legislation would do is marginalize and stigmatize a tiny percentage of a community already reeling from daily racism and Islamophobia, while painting Quebec as an intolerant society that can’t handle cultural and religious differences.

It’s an unfair depiction, but one woefully brought on by overzealous, ambiguous, fear-based policies that are, at their core, deeply undemocratic. By placing such an unfair burden on this tiny percentage of Muslim women wearing face coverings, we are essentially violating our own charter of freedoms and their basic human rights. Most importantly, legislation like this contributes towards the “othering” of entire communities, which can be dangerous and counterproductive in the long run.

This latest legal development is a win for advocacy and civil liberties. Here's hoping it provides the impetus for those defending it to take a necessary step back and see it for the unfair legal repression that it is.