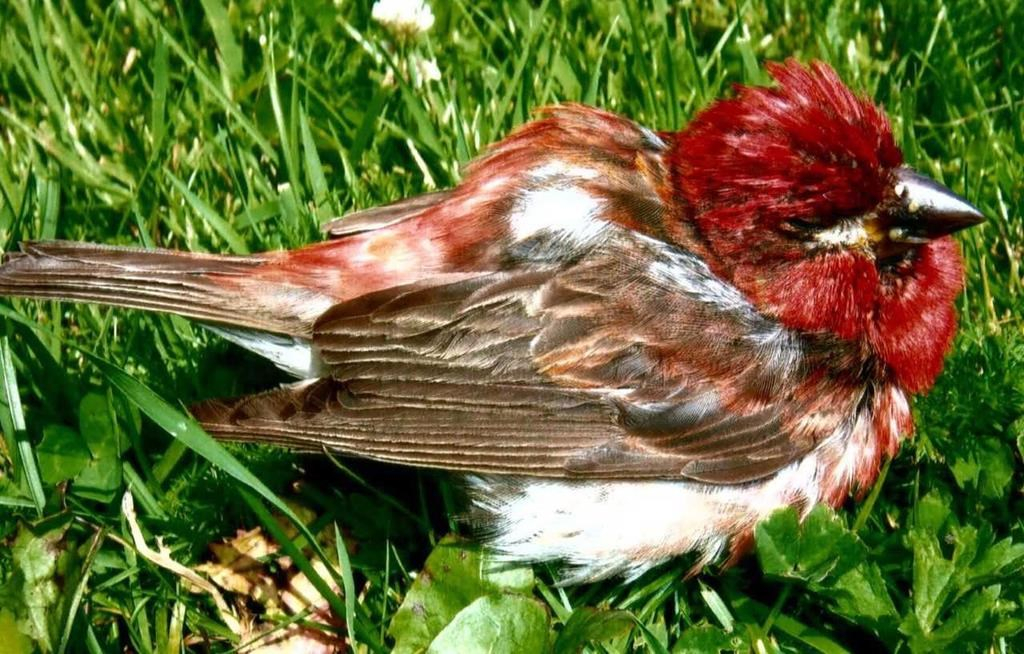 As nice as it might be to watch birds flock outside the window, a group advocating for the conservation and protection of wild birds is cautioning against hanging up bird feeders.

There are no confirmed cases yet, but so far this year the Canadian Wildlife Health Cooperative has received about 10 suspect case reports of trichomonosis, a disease that mostly affects wild finch species in Atlantic Canada.

The disease is caused by a microscopic parasite that infects the tissues in the bird's mouth, throat and esophagus, making it hard for the bird to eat and breathe.

The parasite is commonly transmitted through food and water, and flourishes best in moist bird seed.

"The birds that we're attracting to the backyards are the birds that eat seeds," said David Currie, president of the Nova Scotia Bird Society.

"Those are the ones that tend to flock together in larger numbers and get attracted to the feed … and leave the parasite behind."

He said that during the summer, there's no need to hang up a bird feeder: there's plenty of food to be found in the wild, with trees and grass producing seeds that birds can eat.

"There's no biological benefit for them to be fed in the summer," said Currie. "It's something I just make sure I do in the wintertime, when they do need it."

He said that people who see a sick bird in their feeder, should take it down immediately.

That's what Rebecca Clarke did when saw a sickly bird outside her Hammonds Plains, N.S., home at the end of May.

Clarke was watching her bird feeder one morning when one of the birds, a female purple finch, caught her attention with its unusual behaviour.

"One seemed to be kind of lethargic, slower than the rest, and just didn't quite look right," she said.

The bird was gasping for breath and had food stuck around its beak. Clarke approached it to take a video and was surprised when the bird didn't flee.

"She was definitely sick. I could get right up to her," she said. "I could've touched her, I think, if I had reached out to her."

She sent the video to the Nova Scotia Bird Society, who passed it along to the Canadian Wildlife Health Cooperative. They've since posted the video on their website to educate people on what the disease looks like.

Clarke took down and bleached her bird feeders after the incident, she said.

Megan Jones, Atlantic regional director of the Canadian Wildlife Health Cooperative, said they have only started seeing trichomonosis in birds found in Atlantic Canada — purple finches and American goldfinches — since 2007.

"Sometimes, when they're at your feeder, you'll see them gaping with their beak or looking like they have difficulty breathing, and sometimes they regurgitate food," she said.

People and other mammals can't catch it from wild birds, but the disease can pose a risk to pet birds or poultry.

While none have been confirmed, Nova Scotia has the highest number of suspected cases, with sick bird sightings in Halifax, Lunenburg, Annapolis, Pictou and Antigonish. Sightings have also been reported in Northumberland and Saint John in New Brunswick.

Last year, more than a hundred trichomonosis cases were reported to them, with 18 of them confirmed. Cases were found in all four Atlantic provinces, and one lab-confirmed case was detected in Labrador for the first time.

Jones said they got more reports than ever last year, but they aren't sure if it's because of an surge of the disease's prevalence or an increase in public awareness.

She added that there may be more cases of trichomonosis than people are reporting.

"Public awareness has increased, but we know the submissions we get to the laboratory are really only the tip of the iceberg," she said.

"It could be there, it's just that nobody has seen it."

By Associated Press | News, US News, Politics | August 8th 2017
State Of The Animal