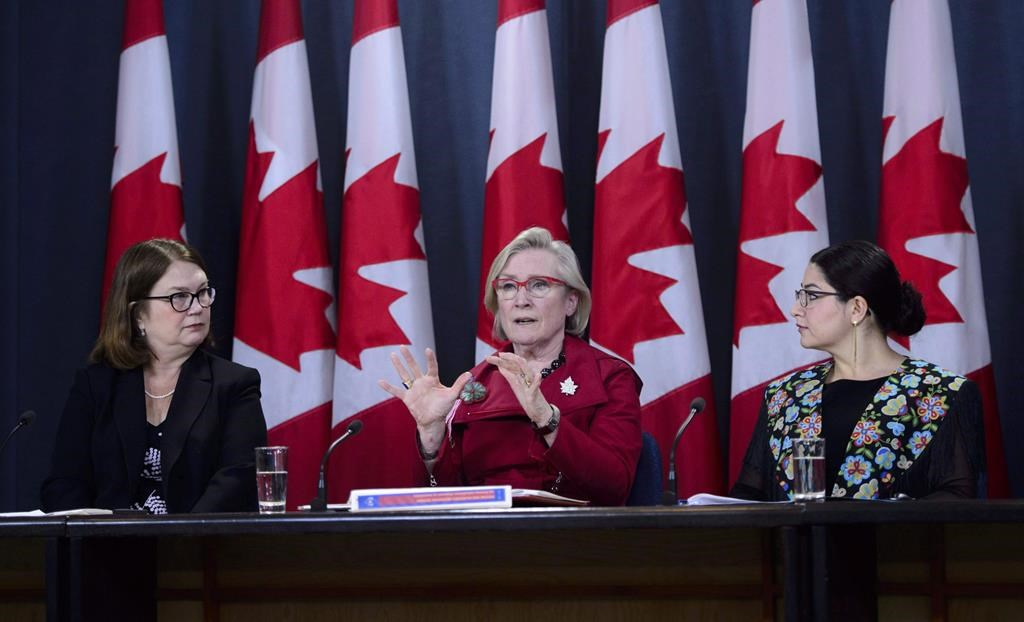 Carolyn Bennett speaks alongside Jane Philpott and Maryam Monsef during a press conference at the National Press Theatre in Ottawa on Tuesday, June 5, 2018. Photo by The Canadian Press/Sean Kilpatrick
Previous story
Next story

A lawyer for the National Inquiry into Missing and Murdered Indigenous Women and Girls has announced he's resigned, and in a statement cites government interference among his reasons.

Breen Ouellette, who worked as a commission counsel for the inquiry at its Vancouver offices, posted online that he resigned on June 21.

Breen, who is Metis, says in the statement that he believes the federal government has "undermined the independence and impartiality of the national inquiry" and that he cannot remain part of a process that he says "is speeding towards failure."

He also asks the inquiry's commissioners to allow him to fully disclose the reasons behind his resignation, which he says he cannot do as a lawyer.

The inquiry has been plagued by chronic delays, staff turnover and complaints from families about disorganization, poor communication and a lack of transparency.

The office of the minister of Crown Indigenous Relations and Northern Affairs responded to Ouellette's allegations late Monday by saying that "at no time has the federal government made any effort to restrict or otherwise limit the powers the national inquiry has to gather evidence."

The office added in its email that the inquiry is encouraged to "use all of the resources at their disposal to seek the answers families have been demanding for decades."

Nadine Gros-Louis, a spokeswoman for the inquiry, earlier confirmed in an email that Ouellette has stepped down, noting that staffing changes do occur.

"As you can appreciate, and as with all organizations, staffing does not remain constant, especially in an environment dealing with difficult subject matter where many staff work extended hours," Gros-Louis wrote.

Breen's statement doesn't mention long hours. As an example of government interference, though, he said the inquiry needs to be able to properly investigate allegations of "illegal and improper" foster-care apprehensions.

"The national inquiry could use its powers to force government departments to comply with investigations into these allegations. The perpetrators could be identified so that governments could stop the misuse of billions of Canadian tax dollars by a few heartless bureaucrats seeking to advance their careers," Breen wrote.

"However, interference by the federal government is undermining this important function of the national inquiry. Canadians deserve to know which provinces and territories perpetuate this unnecessary and harmful spending of billions of tax dollars on foster-care apprehensions."

Last month, the government turned down a request by inquiry officials for a two-year extension in order to give commissioners until Dec. 31, 2020, to make recommendations and produce findings.

Instead, the government agreed to only extend the inquiry's deadline by another six months. That gives commissioners until next April 30 to finish its hearings and submit a final report, instead of the initial deadline of Nov. 1 of this year.

Reached late Monday, Breen said the refusal to grant the two-year-extension, along with the funding for it, shows the government isn't serious about the commissioners meeting the inquiry's mandate.

"They're trying to kill the national inquiry in a death by a thousand cuts, and they're trying to pin the failure on the commissioners," Breen said in a phone interview from Vancouver.

Carolyn Bennett, minister of Crown-Indigenous relations, explained the decision to extend the mandate by just six months was made in part because provinces and territories were not unanimously supportive of extending the terms of reference for the inquiry into next year.

"With diverse backgrounds, experience and expertise, we are united by a deep commitment to honour the missing and murdered, uncover the truth and build a better future for Indigenous women and girls," she wrote.