Rallies across Canada protest separation of children from families in the U.S. 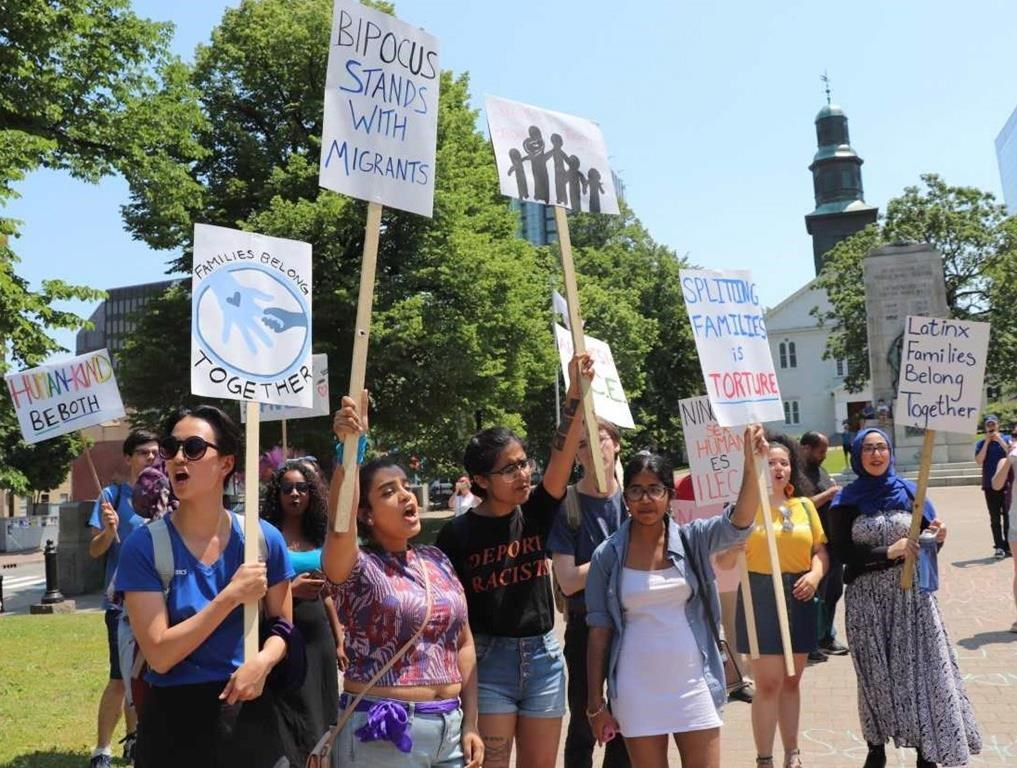 People hold up signs at a rally to protest an American policy that separated families who were caught crossing the U.S.-Mexico border, in Halifax on Saturday, June 30, 2018. Handout photo by Stacey Gomez
Previous story
Next story

From Vancouver to Halifax, crowds of people rallied in cities across Canada on Saturday to protest a policy that separated families who were caught crossing the U.S.-Mexico border.

Although U.S. President Donald Trump recently ordered that families no longer be separated, officials estimate there are still more than 2,000 children who have not been reunited with their loved ones.

"When you see something happening that is wrong, you have a moral obligation to do something about it and show that it won't be tolerated," said Alexandra Vaz, one of the organizers of a rally outside the American Consulate in Toronto.

As protesters across Canada chanted, their message was clear: keep families together.

"If you don't say anything, it's just going to get worse," said John, who travelled to Toronto with his wife from nearby Barrie, Ont., and asked for his last name not to be used.

"We have five grandchildren and we really worry for their future."

As the protest went on, a pile of stuffed animals grew on the ground, representing the children who have been separated from their families and are in the custody of the U.S. Department of Health and Human Services. They were all facing the American Consulate.

"As we arranged them, we thought about each child who had these stuffies before," said Nadia Pestrak, a single mother of two boys who encouraged protesters to bring their own stuffed animals to the rally.

For some of Toronto's protesters, the situation unfolding on the other side of the border hits home.

"I grew up in some trauma myself, so seeing these children took me right back to my place," said Amy Miranda, who helped organized the event.

"It's painful and heartbreaking and I think a lot of people are feeling sick and that is the way we should feel. This is a humanitarian crisis, it's not politics."

As part of the rally, some people who have immigrated to Canada from other countries took the microphone and told their own stories. Laura Prado, an immigrant from Uruguay who arrived to Canada in 1986, said she could not bear the notion of being separated from her child.

She said she was appalled when she heard audio of children in a U.S. detention centre asking to see their parents.

Many of the protesters across Canada also pointed at the fact that this country has also separated families from their loved ones — and still does so.

At the protest in Halifax where dozens gathered, activist Masuma Khan, whose parents immigrated to Canada from Afghanistan decades ago, said the rally aims to both oppose families being separated at the U.S.-Mexico border and reflect on Canada's own history of family separation.

"When I think about the struggle of my parents, and the idea of being taken away from them, I can't even imagine what that's like," she said. "But the reality is that this country has been separating children from racialized and Indigenous parents from the start of its existence."

As examples, Khan pointed to residential schools — the last of which closed in the mid-90s — and the 60s Scoop, a practice where about 20,000 Indigenous children were taken from their homes and adopted into non-Indigenous families between 1951 and 1991.

"We know these issues don't just exist in the United States. We know they also exist here at home," said a Facebook post about Toronto's rally.

More than a dozen other events were organized in Canada on Saturday, including in Winnipeg, Edmonton and Ottawa.

— with files from Alex Cooke in Halifax