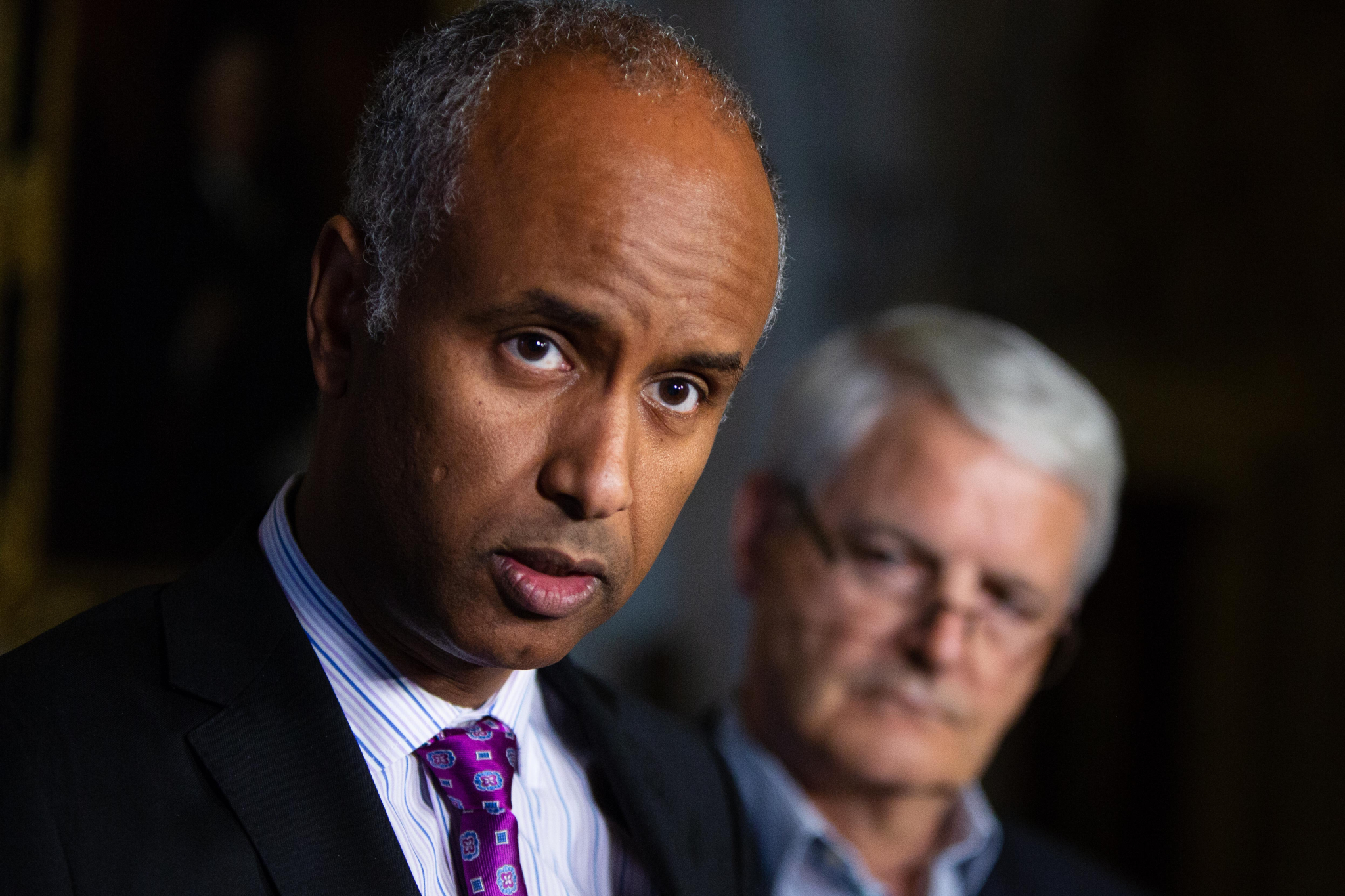 Ahmed Hussen, Minister of Immigration, Refugees and Citizenship, and Marc Garneau, Minister of Transport, meet with the media following a meeting of the Intergovernmental Task Force on Irregular Migration, on July 4th, 2018. Photo by Alex Tétreault
Previous story
Next story

Days after Ontario's June 7 election, representatives from several immigration, refugee and settlement agencies gathered to discuss and strategize over the implications of Premier Doug Ford’s leadership on their sector. The co-director of the FCJ Refugee Centre Francisco Rico-Martinez had no doubt in his mind that Ford would “cancel” the ministry of citizenship and immigration.

When Ford unveiled his 21-member cabinet on June 29, Rico-Martinez wasn’t surprised to see no immigration minister on the list.

“People were saying, for instance, that immigration and refugees is not a priority for Doug Ford. They were not expecting this type of radical change,” said Rico-Martinez. “But I was expecting it.”

The FCJ Refugee Centre is a Toronto-based registered charity that provides a shelter for refugees and assists them with claims. It has received funding from both the federal and provincial governments.

Rico-Martinez’s concerns were prompted by a comment Ford made at a leader’s debate held in Parry Sound in northern Ontario on May 11.

When asked about whether he would support a northern-Ontario-focused immigration nominee pilot program, which would let businesses in the north sponsor immigrants to come work there specifically, Ford answered in the negative.

“I’d be more than happy to sit down and talk to the folks and look at a pilot project,” he said, during the debate. “But number one, I’m a pretty generous guy — I’m taking care of our own first. Once we take care of our own, once we exhaust every single avenue and don’t have anyone that can fill a job, then I’d be open to that.”

It was a comment, Debbie Douglas, longtime executive director of the Ontario Council of Agencies Serving Immigrants (OCASI), took note of too. “We believe immigrants and refugees are Ontarians,” she said. “So when we talk about 'we take care of our own,' they are our own. It’s about us. it’s not about ‘we’ and ‘them.’”

Several weeks after that Parry Sound debate, on July 4 in Ottawa, the federal government got its first look, in person, at Ford's new government. The meeting comes at a time when Canada continues to grapple with the politically-charged issue of asylum seekers at the borders of Ontario, Quebec and Manitoba.

“But number one, I’m a pretty generous guy — I’m taking care of our own first. Once we take care of our own, once we exhaust every single avenue and don’t have anyone that can fill a job, then I’d be open to that," Ford said. #Onpli

Federal Immigration Minister Ahmed Hussen emerged from the meeting saying that he was ready to work with the Ford government on the issue.

Under Canada's Constitution, immigration responsibilities are shared between the federal and provincial/territorial governments.

In Ontario, Ottawa-area MPP Lisa MacLeod will be taking on citizenship and immigration in Ford's cabinet as part of a suite of four files that also includes children, community and social services, and women’s issues.

Hussen welcomed MacLeod for the first time on July 4 to a task force on irregular migration that also includes Toronto Mayor John Tory and as well as provincial government representatives from Quebec.

“I told her that I look forward to working with her, as we move forward together. This is an issue that we all have to work together, play our roles, both the provinces, the municipalities, as well as the federal government,” said Hussen outside the House of Commons in Ottawa.

“The federal government is willing to assist Ontario, Quebec and Manitoba with some of the costs that they’ve incurred as a result of this unusual movement, influx of asylum seekers.”

He noted the Trudeau government’s June 1 commitment of $50 million to Ontario, Quebec and Manitoba for temporary housing, and said “we’ve also made it very clear that that was just the first installment.” Mayor Tory, for example, has complained that Toronto’s shelter system is full of refugee claimants.

“I wouldn’t presuppose to speak on behalf of Premier Ford, but certainly he has been a very vocal advocate of the fact that Ontario’s finances are out of control, and that the people of Ontario have not been put first in many policy discussions under the former Liberal government,” she said.

Within days of taking office, the Ford government has been quickly shedding its predecessor’s central policies, walking away from the cap and trade carbon pricing system, dismissing Ontario’s chief scientist and halting police oversight reforms.

When asked if he expected that Ford would maintain the immigration deal signed with the former Ontario government in November to help newcomers meet provincial occupation requirements and attract French-speaking immigrants, among other objectives, Hussen declined to say, instead touting the deal's benefits.

“It’s an agreement that was very helpful to Ontario, as they continue to use immigration as a great tool to be sure that labour market and skills gaps are addressed,” said Hussen.

“Ontario has always been very keen on the Ontario provincial nominee program, and as a federal government we’ve always assisted them.”

Voices on the right have been calling for Ford to block all irregular migration at the border until the federal government changes its Safe Third Country Agreement with the U.S. The existing provisions of this agreement have prompted a flood of asylum seekers to illegally cross Canada's border and seek refugee status after being informed they were at risk of deportation by the Trump administration.

Meanwhile, refugee lawyers have been calling on government to end its co-operation with the U.S. and suspend the agreement. The Trudeau government has said it is open to “modernizing” the deal.

“We are continuing to work with the United States, as an important partner. They are very much aware of the situation at the moment,” he said.

“The issue of the safe third country agreement is raised. At this point there’s nothing official going on, but it is something that we’re willing to modernize, and we keep in contact with our U.S. counterparts”

Garneau said the government continues its U.S. “outreach” to “make sure that people who decide to come to Canada are fully informed as to what it means to make a refugee application in this country.”

And the government was ensuring there were resources in place at the border crossings and for migrants waiting for their Immigration and Refugee Board (IRB) hearings to be integrated into the provinces and hopefully find employment.

Hussen said the target was to move to a 12-month processing time, although he wouldn’t say what it is now. He pointed to federal government money for the IRB to increase the number of decision-makers to reduce processing time.

'We are in the hands of Doug Ford now'

Douglas from the Ontario Council of Agencies Serving Immigrants was “unpleasantly surprised and extremely disappointed” to see that Ontario no longer had a ministry dedicated to immigrants and refugees. Both her and Rico-Martinez, from the FCJ Refugee Centre, worry the refugees and their needs will no longer be seen as a priority. This could put funding the ministry provided for general settlement and integration services at risk.

In the past year, immigrant and refugee aid agencies across Ontario have been reporting a higher influx of asylum seekers. The FCJ Refugee Centre has seen the number of people landing on their doorstep increase from an average of 25 people every week in 2017 to almost 60 every week this year.

“The reality changes from one day to another,” Rico-Martinez said. “It’s a troubling new normal: A high number of refugee claimants, a high number of non-status people and no Ministry of Citizenship and Immigration.”

The increase in asylum seekers coming through the U.S.-Quebec border and heading for Ontario has strained the resources of the provincial organizations who aid such refugees.

Toronto Mayor John Tory “has been very clear about the need for all governments to work together to help Toronto deal with the unprecedented influx of refugee claimants and asylum seekers on Toronto’s shelter system,” said Don Peat, spokesperson for Mayor Tory.

“As the city staff report approved by council last month stated, we have exhausted our available sites, our resources and our personnel and we need a true partnership between all governments to help these families,” Peat said.

As negotiations and talks continue between Ontario, Quebec and the federal government to address the influx across the border, Douglas and Rico-Martinez wonder how the province will remain proactive on immigration and refugees issues.

“This is critical time in the conversation on how we will welcome asylum seekers,” Douglas said. “We need a strong Ontario presence at the national table, but how can we do that if we have no minister who has been primarily named responsible?”

Douglas and Rico-Martinez are gearing up to reach out the the new members of cabinet. OCASI is sending out requests this week to arrange for talks on the importance of the immigration and refugee sector to the province.

Douglas said she would also like to see a parliamentary assistant appointed “who can carry this important portfolio given the size and the various responsibilities of this new ‘super’ ministry to be led by MacLeod.

Immigration is a multi-jurisdiction issue, Douglas said, that requires the province to work with the federal government and municipalities. The issues are vast and various, ranging from training specially designed for newly-arrived immigrants to settlement services to health care.

“It will be very difficult for any organization that help non-status people to survive in the next four years,” Rico-Martinez said. “Nothing is clear yet...The many things we have for refugees and immigrants could be deleted.”

“We are in the hands of Doug Ford now.”

I do wish Mr. Garneau would

I do wish Mr. Garneau would use factual language in his discussions with media. "Marc Garneau, Minister of Transport and Chair of the Ad Hoc Intergovernmental Task Force on Irregular Migration?" I'm sure he meant to say illegal...not irregular. All the spin in the world will not change that fact.

How many Canadian citizens

How many Canadian citizens are unemployed? How many are homeless?
In what condition is our infrastructure, ie hopitals, schools, housing? Does it currently comfortably support the existing population?
Bottom line? Mr. Trudeau made a huge mistake when he tweeted, "You'all come."