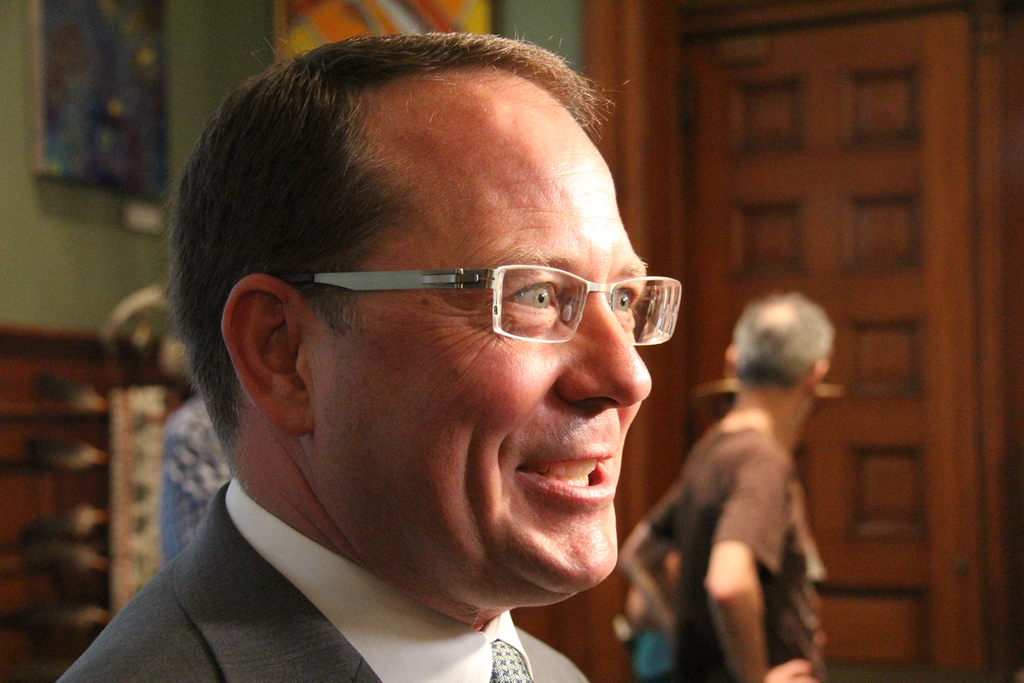 Mike Schreiner speaks with the media after his swearing in at Queen's Park on July 5, 2018. Photo by Steph Wechsler
Previous story
Next story

A moment after he swore his oath, Mike Schreiner said he was looking forward to doing politics differently.

Schreiner, the newly-minted MPP for Guelph, had just become the the first Green party politician to be sworn in at the Ontario legislature.

“I think there’s thousands and thousands of people around Ontario who have been looking forward to a Green moving into an office at Queen’s Park,” Schreiner told media after the brief ceremony. “It’s a historic moment today.”

Schreiner, who leads Ontario's Green party, was greeted by warm applause from a small crowd of family and supporters for the occasion.

In Guelph, Schreiner unseated Liz Sandals who had served as the riding’s Liberal MPP for 15 years. He has led the party since 2009 and this is the third time he tried to win in Guelph.

The new MPP has been vocal on the new government’s first policy shifts, featuring Ontario’s exit from the carbon pricing market it shared with Quebec and California. On Wednesday, Premier Doug Ford dismissed the province’s chief scientist, who had held the job six months, indicating that

“I was deeply disappointed,” Schreiner told National Observer following the ceremony. “I mean, we know science is critical to making good evidence-based decisions that put the people of Ontario first, and for the government to come in and say ‘we’re going to be anti-science’ is a step in the wrong direction.”

Ford's office has said that it was looking for a suitable replacement for the science advisor, the Globe and Mail reported on Wednesday.

Schreiner says he hope that Ford’s government will be transparent as it formulates a plan to replace cap and trade, in response to a recent comment from Environment, Conservation and Parks Minister Rod Phillips in which he claimed that businesses have said that carbon pricing is hurting jobs.

“I’ve had businesses reach out to me and say the exact opposite,” said Schreiner. “That they’ve already planned for pricing pollution in their business plans. What they prefer actually is stable, steady policy so they can engage in long-term business planning, not this jerking around of we have one plan in place and then we get rid of that without having an alternative plan in place, and so that level of uncertainty is actually bad for business.

When the legislature sits next week, Schreiner says he hopes to meet with the premier to find common ground on climate solutions that can boost Ontario's economy.