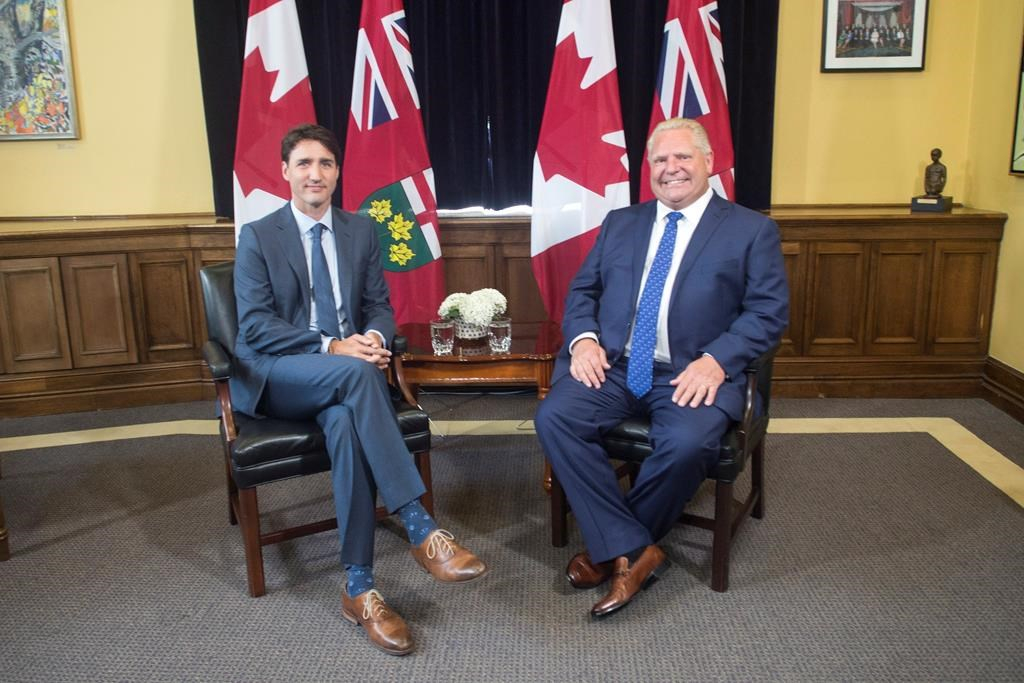 Ontario residents, and not the newly elected Progressive Conservative government, will receive the proceeds of a carbon price imposed on the province by the federal government, Prime Minister Justin Trudeau said Thursday.

Trudeau made the comments moments after he met with Ontario Premier Doug Ford, who has already begun the process of scrapping the province's cap-and-trade system — in defiance of Ottawa's insistence that all provinces put a price on greenhouse gas emissions.

The federal government has said it will "backstop" any province that doesn't have a system in place, and has told provinces they must have submitted details of a carbon pricing plan by Sept. 1. But Ottawa has for months hinted it could return hundreds of millions in revenues it will raise directly to taxpayers, and not to governments that oppose its plan.

"Obviously, it's better if we can work collaboratively with the provinces," Trudeau said Thursday.

"But, as we've seen, if provinces do not wish to be part of the national plan, the federal government will move forward on bringing in a carbon price backstop and returning directly — in this case to Ontarians — the money collected on the pricing of pollution."

A spokeswoman for federal Environment Minister Catherine McKenna said Wednesday that the $420 million earmarked for Ontario under the Low Carbon Economy Leadership Fund was under review. The funding was contingent on the province agreeing to the fund's framework, which includes imposing a carbon price.

Trudeau appeared to go even further Thursday, saying he discussed the issue with Ford during their first meeting at the Ontario legislature.

"The premier and I talked directly about the fact that we have very clear mandates from the people who elected us," he said.

"The clear mandate that I got elected on was to bring in a national plan to fight climate change. That's exactly what I'm going to do."

Ford spokesman Simon Jefferies said the premier is making good on a promise of his own made during the spring provincial election campaign.

"Premier Doug Ford and the Ontario PCs received a strong mandate from the people of Ontario to scrap the cap-and-trade carbon tax, and to put more money in the pockets of Ontario families," he said in a statement.

"Premier Doug Ford and the Ontario government will fight any efforts by the federal government to impose a carbon tax on the people of Ontario in court."

A week after winning a majority government in the June 7 election, Ford said the Tories would provide clear rules for an "orderly wind down" of cap and trade, and would give notice of Ontario's withdrawal from the carbon pricing market it shares with Quebec and California.

During the campaign, Ford's team estimated challenging the federal carbon tax in court would cost taxpayers $30 million over four years.

Cap and trade was introduced by Ontario's former Liberal government to put limits on the amount of acceptable emissions and create incentives for industry to invest in reducing their carbon footprint.

If he does a direct rebate

If he does a direct rebate for one province he has to do it for all....https://canadianviews-ymo.ca/telfon-trudeaus-serial-bungling/

I'm not understanding. He

I'm not understanding. He takes it away, then gives it back after first taking out administration fees? ...and the result is that the costs of everything rise? It must be legitimate, after all, he is the PM.