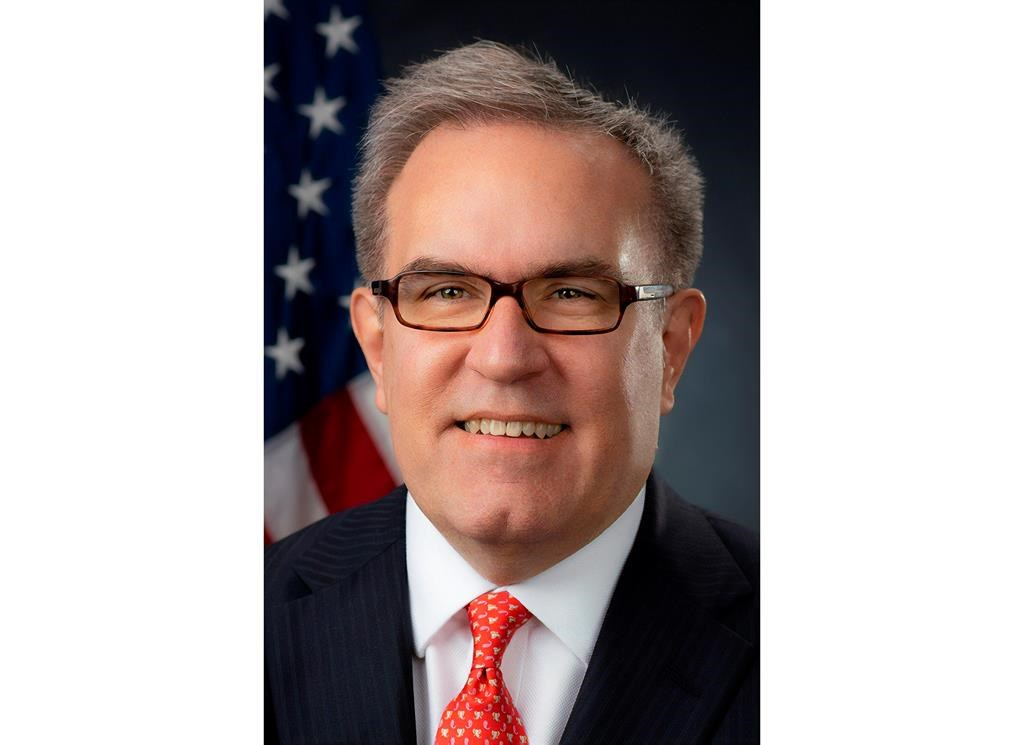 In this April 2018, photo provided by the Environmental Protection Agency, Andrew Wheeler poses for a photo in Washington. File photo by The EPA via AP
Previous story
Next story

The new leader of the Environmental Protection Agency is a former coal industry lobbyist who helped lead an industry fight against regulations that protect Americans' health and address climate change.

Andrew Wheeler, the No. 2 official at EPA, will take over the agency Monday now that President Donald Trump has accepted the resignation of embattled administrator Scott Pruitt.

The Senate confirmed Wheeler as the agency's deputy administrator in April.

Trump tweeted that he has "no doubt that Andy will continue on with our great and lasting EPA agenda. We have made tremendous progress and the future of the EPA is very bright!"

Wheeler, 53, could serve more than a year in an acting role. A Senate vote would be required if he is nominated to lead the agency permanently.

Republicans say Wheeler is well-qualified to lead the EPA, having worked at the agency early in his career. He also was a top aide at the Senate Environment Committee before becoming a lobbyist nine years ago.

Democrats and environmental groups decried Wheeler as a coal apologist and former top aide to a GOP senator who rejects mainstream climate science.

"Andrew Wheeler's coal credentials are without equal. He is, without question, a member of the coal industry's Hall of Fame," said Sen. Edward Markey, D-Mass. By elevating Wheeler to replace Pruitt, he said, "the EPA is only trading one fossil fuel friend for another."

Like Pruitt, Wheeler is a conservative who will seek to roll back rules governing clean air and water and fighting against climate change.

But unlike Pruitt, Wheeler is considered low-key and is a Washington insider who has spent much of his career in the nation's capital.

Pruitt, a former Oklahoma attorney general, is often aligned with the oil and gas industry, while Wheeler has focused more on coal since becoming a lobbyist a decade ago.

An Ohio native, Wheeler served as a special assistant in the EPA's Pollution Prevention and Toxics office in the early 1990s before moving over to the Senate environment panel, where he eventually became GOP staff director under Sen. Jim Inhofe, R-Okla., the panel's former chairman and a political mentor to both Pruitt and Wheeler.

Inhofe, who dismisses global warming as a hoax and famously tossed a snowball on the Senate floor to prove his point, hailed Wheeler's ascension to EPA chief. "Andrew worked for me for 14 years, has an impeccable reputation and has the experience to be a strong leader at the EPA," Inhofe said.

Until his nomination by Trump last fall, Wheeler worked as a lobbyist with a client list that included Murray Energy, one of the nation's largest coal mining companies. He accompanied Murray CEO Bob Murray during a series of closed-door meetings to lobby the Trump administration to kill environmental regulations affecting coal mines.

Senators asked Wheeler about the Murray meeting during his confirmation hearing. Wheeler acknowledged he attended but said he couldn't remember any details.

Markey vowed to fight against Wheeler and said, "The future of our public lands, our waterways and oceans and the very health of the entire planet rest on the continued action of all Americans to take back the EPA from Big Oil and King Coal."

Sen. Tom Udall, D-N.M., called Wheeler a "climate denier" who "has spent much of his political career lobbying for the big polluters EPA regulates."

Widespread disgust for Pruitt "should serve as a blaring red siren for the Trump administration," Udall said. "Americans will not tolerate another EPA administrator whose primary goal is to fight the core mission of the EPA."

Wyoming Sen. John Barrasso, who chairs the Senate environment panel, said that during Pruitt's tenure, the EPA "has rolled back punishing regulations that were hurting American workers and stifling our economy."

As acting EPA head, "Andrew Wheeler is well prepared to continue the progress already made under President Trump," Barrasso added.