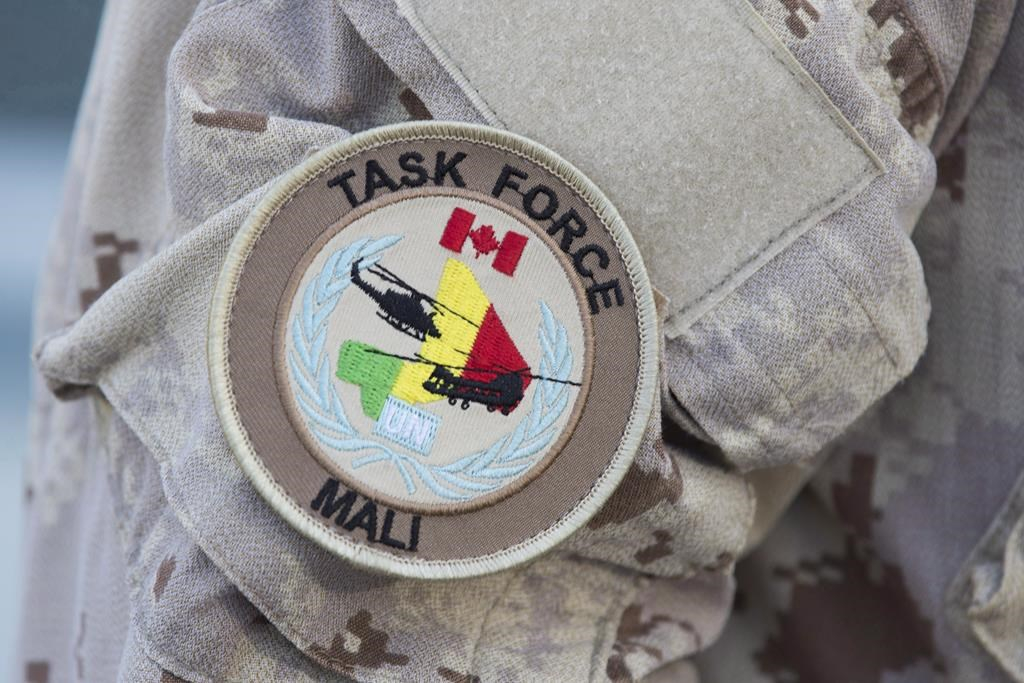 The UN Mali patch is shown on a Canadian forces member's uniform before boarding a plane at CFB Trenton in Trenton, Ontario, on Thursday, July 5, 2018. Photo by The Canadian Press/Lars Hagberg
Previous story
Next story

The arrival of Canadian troops in Mali has coincided with raised hopes and heightened tensions over what is expected to be a decisive moment in the West African country's recent history: presidential elections later this month.

The elections, scheduled for July 29, are being hailed as an important milestone for the country, which has been riven by political unrest and growing instability marked by widening internal divisions and frustration at the government.

The hope among many Malians is that a successful presidential vote — to be followed later this year by regional elections — will begin to reverse the country's lagging fortunes and pave a path out of the current morass, which has endured for six long years.

"Politically, nothing has really moved over five years, there hasn't been any result, really," Ousmane Maiga told The Canadian Press during a recent visit to a bustling outdoor market in Mali's capital, Bamako.

"Maybe with this election, it can change. Because Malian citizens, the Malian population see that it's very important to make a good choice. To have someone who has a vision. And to also choose someone who is not included in corruption."

Malians aren't the only ones hoping for a successful presidential election.

"The stability of Mali and the establishment of a government that works for Malians is essential to the success of any Canadian support for this country," former Canadian ambassador to Mali Louise Ouimet wrote in an online post this week.

However, preparations for the vote have been marred by fighting between different ethnic groups and attacks on government forces by Islamic jihadists, as well as more mundane challenges, such as registering voters.

There are also questions about whether the election will be free and fair — and whether any of the 24 candidates running for the presidency can truly bring the country together and address its deep-seated problems.

"The current picture of Malian politics is rather sad," Ouimet wrote for the Canadian International Council's Africa study group. "Candidates and their parties have said little about their vision for a new Mali or solutions to the current problems."

Mali was considered an example of democracy and stability in Africa until a separatist rebellion in the north of the country in 2012 threatened the capital, which was itself in turmoil due to an army coup that ousted then-president Amadou Toumani Toure.

After the French military intervened and the UN agreed to deploy a peacekeeping force to help stabilize the country, a new presidential election was held in 2013.

Ibrahim Boubacar Keita won by a landslide on a promise to bring peace and stability back to the country. But the intervening years have instead seen Malians grow disillusioned as the security situation deteriorates and government corruption endures.

The United Nations has repeatedly underscored the importance of the upcoming election. Earlier this week, Alouine Tine, the UN's independent expert on human rights in Mali, called the vote a "turning point in the democratic life of the Malian people."

A Canadian official similarly described the election as "fundamental in terms of the consolidation of democracy in Mali," adding that Canada will deploy diplomats as part of a European Union observation mission for the vote.

A rash of recent violence has raised questions about whether a legitimate election can in fact take place — particularly in the centre of the country, where ethnic militias and jihadists linked to al-Qaida and the Islamic State group have been operating.

That includes three attacks over the past week that targeted the Malian military and a French counter-terror mission, killing more than a dozen people, even as dozens of others died in inter-communal fighting over the month of June.

The Malian government has also faced difficulties registering voters: A report from UN Secretary General Antonio Guterres in June found that only 27 per cent of Malians between the ages of 18 and 23 were on the electoral registry.

The international community, meanwhile, has pressed for free and fair elections and for the Malian government to respect the opposition after a violent crackdown last month on widespread protests in Bamako against Keita, who is running for re-election.

Concerns linger, however, about whether Malians will be disappointed in the results, considering there are 24 candidates on the ballot, and both Keita and his main challenger, Soumaila Cisse, are considered part of the ruling establishment.

"To be totally honest, it's hard for me to know what to hope for," said Jonathan Sears, an expert on Malian politics at the University of Winnipeg.

"There's a lot of things that have to go right, and they could. But it's hard to imagine that whatever happens on the 29th of July will meet a lot of people's expectations."