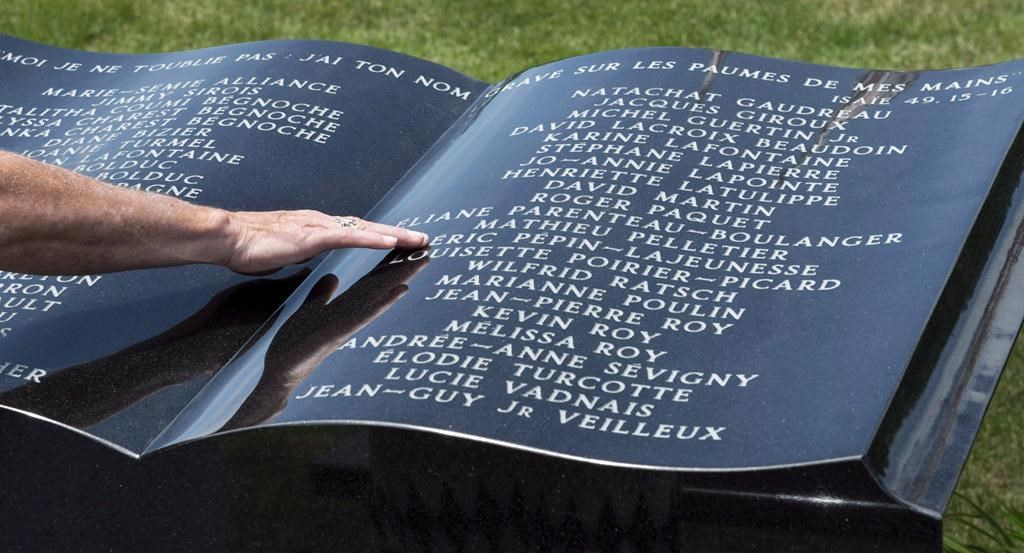 A man touches a stone monument in front of Ste-Agnes church following a memorial service for the 47 victims of an oil-filled train derailment a year ago in Lac-Megantic, Que., on Sunday, July 6, 2014. File photo by The Canadian Press/Paul Chiassont
Previous story

A commemorative church service was held in Lac-Megantic on Friday to mark the five-year-anniversary of the train derailment that killed 47 people and destroyed part of downtown.

Church bells rang out later to remember the victims who lost their lives on July 6, 2013, after a runaway train hauling tanker cars loaded with volatile crude oil barrelled into the town of 6,000, derailed and exploded.

The service was part of a series of events being held through Sunday to commemorate the tragedy.

The ceremonies kicked off on Thursday evening with a concert and a silent march that ended at the graveyard where many of the victims are buried.

Laurence Roy, who has lived in Lac-Megantic for 25 years, said it's hard to commemorate the anniversary because the memories of the event are still so painful.

"It's important to have events to underline (it), but not all the time," she said at the march.

"It brings back a lot of emotions for those who lost loved ones."

She noted many of her fellow citizens were still suffering from the effects of the tragedy, even five years later.

The town has been slowly rebuilding since the derailment, but many in the area still suffer from post-traumatic stress, according to a 2017 government study.

Lise Vigneault, who attended Thursday's concert, said some citizens have moved on while others still struggle.

"Each of us grieves in our own way," she said. "Myself, I went to get help because I had an emptiness inside.'

Some citizens say some of their stress will be alleviated now that the federal and provincial governments have agreed to fund a 12.8-kilometre bypass track that will take rail traffic away from the downtown area, hopefully by 2022.

"Today, we remember the victims, and our thoughts go out to all those whose lives were forever changed," Trudeau said.

"The tragedy left scars that cannot be erased — but in the weeks, months, and years that followed, Lac-Megantic became a symbol of hope, determination, and solidarity. Today, the people of Lac-Megantic continue to show resilience and courage as they rebuild their community."

But back in Lac-Megantic, not everyone was planning to participate in commemorative events.

Yannick Gagne, the owner of the bar that was at the heart of the disaster, said he would be spending the anniversary in his restaurant with friends and family.

"We always say that the years go by and that it gets easier, but it's harder," Gagne said Thursday.

The Musi-Cafe became a symbol of resilience after it reopened in December 2014, some 17 months after three of its staff members and a number of clients died in the explosion.

Now the business is up for sale, and Gagne acknowledges that, in hindsight, he may have reopened too soon.

"Five years later, I realize I wasn't ready," he said. "I shouldn't have jumped back into this madness."

— With files from Ugo Giguere