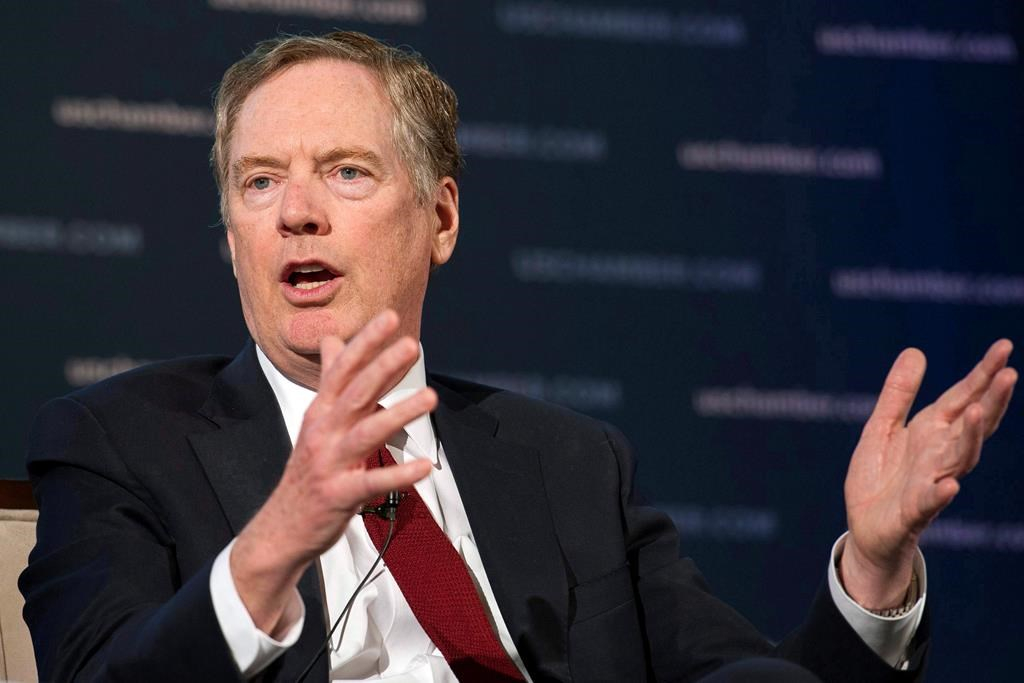 U.S. Trade Representative Robert Lighthizer speaks at the 9th China Business Conference at the U.S. Chamber of Commerce in Washington, on Tuesday, May 1, 2018. File photo by The Associated Press/Cliff Owen
Previous story
Next story

The U.S. Department of Commerce says it has ended countervailing duties on supercalendered paper from Canada that have been in place since 2015.

The move comes after Verso Corp., the main U.S. producer of the glossy paper stock, told the U.S. commerce secretary in March that it was no longer interested in continuing with the duties following a settlement with some Canadian producers.

The U.S. Department of Commerce said Friday that the final results of a review sparked by the settlement mean it will retroactively revoke the duties to their start date in August 2015, and will repay companies with interest.

Saint John-based J.D. Irving issued a statement saying it appreciates the "hard work" of Foreign Affairs Minister Chrystia Freeland and her staff in achieving what it called the positive result.

Montreal-based Resolute Forest Products Inc. said it was "pleased" the duties would be lifted. The company said it had paid $60 million in cash deposits from the duties and expects to know the timing of its refund in the coming days.

The end of duties is a rare bright spot for Canada in an environment of increasingly protectionist actions from the United States. Softwood lumber producers are still contending with duties on their products, while more recently U.S. President Donald Trump has slapped tariffs on aluminum and steel imports and threatened to do the same with auto imports.

The announcement by the U.S. Department of Commerce came a day after the World Trade Organization ruled largely in favour of Canada in the dispute over perceived subsidies on supercalendered paper, which is mainly used in magazines, catalogues, corporate brochures and advertising inserts.

U.S. Trade Representative Robert Lighthizer issued a statement Friday decrying the ruling as "the latest example of judicial activism at the WTO," while noting that the U.S. officially terminated the duties on Thursday.

Last year, a NAFTA review panel also ruled in Canada's favour with a unanimous decision to order the U.S. Department of Commerce to reconsider its duties against Canadian mills that produce glossy paper.

The U.S. imposed the duties in 2015, including a 20.18 per cent duty on Nova Scotia's Port Hawkesbury Paper, a 17.87 per cent duty against Montreal-based Resolute Forest Products, and a duty of 18.85 per cent on the J.D. Irving mill in New Brunswick and Catalyst Paper of B.C., though J.D. Irving successfully had its duties reduced last year.

The settlement reached in March included J.D. Irving-owned Irving Paper Ltd. and Port Hawkesbury Paper together paying Verso Corp. as much as US$42 million out of the duties they expect to have refunded.

The agreed terms said that both sides wanted to avoid the uncertainties and risks related to reviews and legal issues on the duties, and wished to instead "amicably resolve the differences between the two sides through agreement."

Exports of supercalendered paper from Canada to the United States were valued at $959 million in 2014.