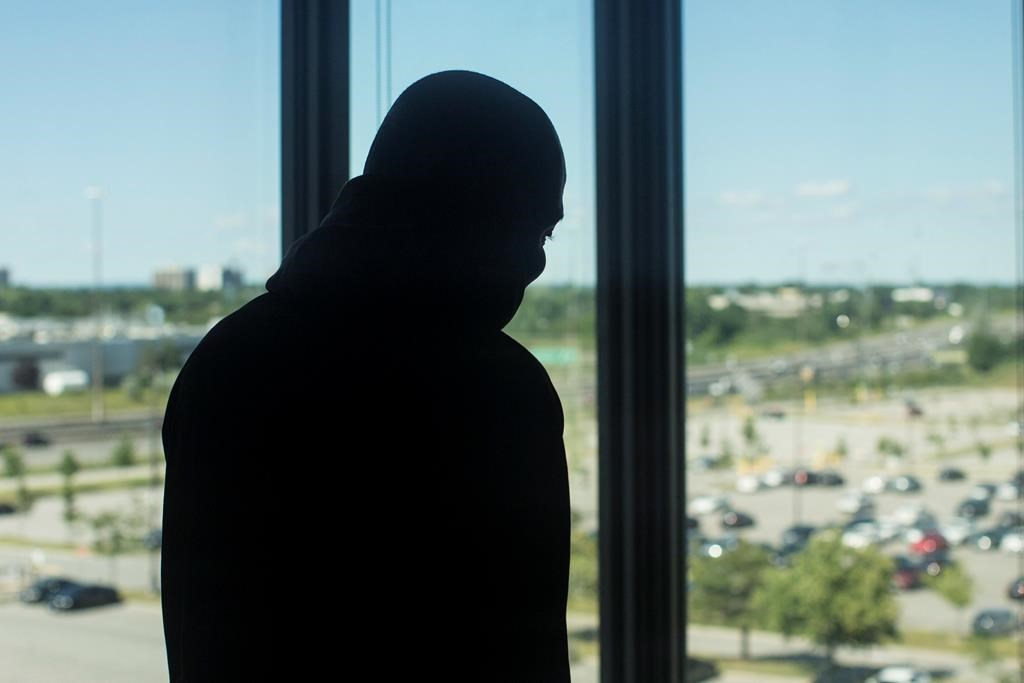 Agibola, a Nigerian migrant is pictured at Centennial College residency where he is being temporarily housed in Toronto on Friday, July 6, 2018. File photo by The Canadian Press/Chris Young
Previous story

On a summer afternoon, the sounds of children babbling behind closed doors spills into the otherwise deserted halls of an east Toronto student residence.

Fifty four-bedroom dormitories at Centennial College now serve as temporary homes for 344 asylum seekers, including 96 families. Hundreds more are currently being housed in another student residence.

But with less than a month before students return ahead of the school year, time is running out for refugee claimants who have yet to find a more permanent home.

The Aug. 9 deadline has been the focus of political discussions in recent weeks, with the Ontario government saying the province will face a "crisis" without federal support.

For some of the asylum seekers staying at the Centennial building, that date ushers in a new wave of uncertainty. But they say anything is better than what they left behind.

A Nigerian couple, who asked not to be named for fear of retribution, said they fled their home in March after receiving threats from the militant group Boko Haram.

They sold their belongings and took their two-year-old daughter to Orlando, Fla., they said. But anti-immigrant rhetoric there made them feel unwelcome and pushed them to head north into Canada, they said.

"We realized that (U.S. President Donald) Trump does not want immigrants," the woman said.

"We saw on the internet that Canada accepts asylum seekers," her husband added.

From Florida, the couple went to New York state where they got on a bus to Montreal.

It's a common journey for many of the asylum seekers who arrived in Toronto this year, many of whom end up in the city's shelter system.

There were 3,304 refugee claimants in the shelter system as of late June, accounting for 47 per cent of its users, according to city data. More than half of them are part of a program for refugees in hotels and college residences.

The Ontario government said Friday it has requested further funding to deal with the August deadline.

The federal government has offered $11 million to Ontario to offset immediate housing costs, but the provincial government said that will cover a fraction of the costs incurred in Toronto alone.

The province said earlier in the week that Ottawa should cover the entire cost of resettling asylum seekers because its policies were encouraging people to cross into Canada illegally.

More than half of asylum seekers who entered Canada by the end of May filed a claim for refugee status from inside the country, meaning they crossed the border irregularly rather than at an airport or other official crossing, according to the latest data from Immigration, Refugees and Citizenship Canada.

Under current rules, asylum seekers have 15 days to file a refugee claim once they arrive in Canada. If the claim is accepted, Canada has an obligation to protect those people and provide them with services such as housing until their claim is heard, says Mathieu Genest, spokesman for the federal immigration minister.

"We are very mindful of the August 9 deadline and so we are working on a number of options," he said, though he gave no further details.

More than 85 per cent of the thousands of asylum seekers in Toronto come from Nigeria, according to city statistics.

The Nigerian asylum seekers in the Centennial residence have formed a tight-knit community, travelling in groups to view potential homes or meet with organizations such as the Red Cross, some of them said.

Many have received a social insurance number and a work permit, but said jobs and homes have been hard to find, as they can't provide landlords with pay stubs or credit checks. A competitive rental housing market makes finding a suitable home even more challenging, they said.

Agibola, a 37-year-old man who gave only his first name, said he has been viewing multiple apartments every day, some as far as London, Ont. He said he keeps getting rejected because he can't give landlords the documents they're asking for.

It also takes an emotional toll, he said, noting his two young kids think every apartment they tour will be their new home.

Despite the looming deadline, Agibola said everyone is trying to remain positive and they're thankful for the support they have received.

"I know the government is trying their best. I know they’re trying to make us comfortable and I appreciate that," he said. "We don't expect the government to do everything for us."

Who could blame these asylum

Who could blame these asylum seekers if they felt a little disgruntled with the PM. After all, he put out the invitation. Guests would naturally assume their lodging was taken care of.