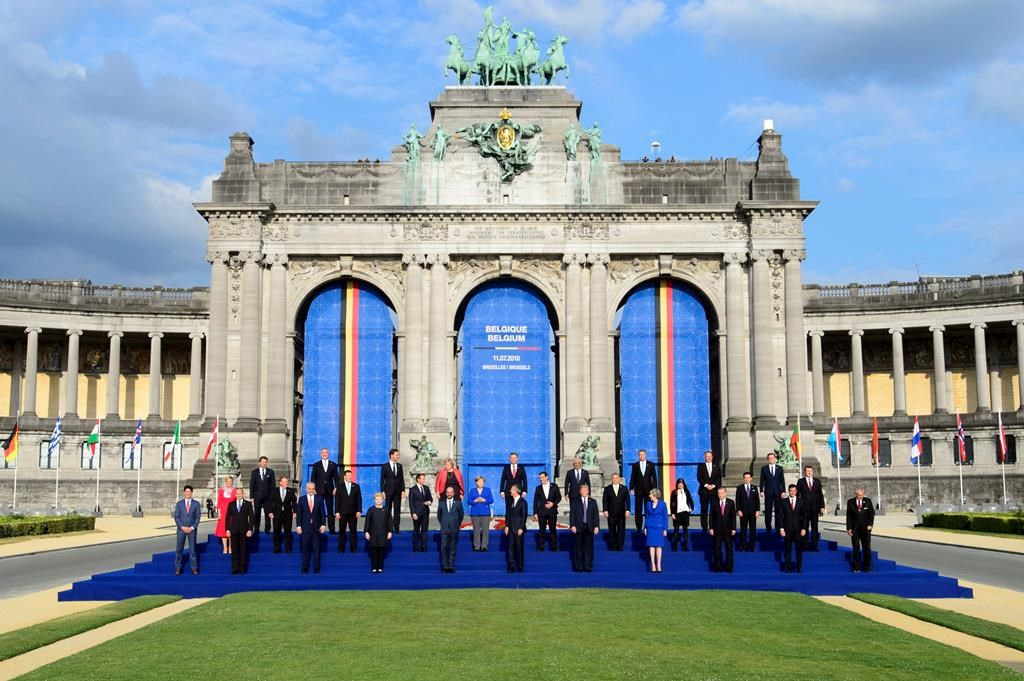 The Trudeau government and the Trump administration have found a rare patch of common ground at the NATO summit in Brussels — shared concern about a proposed Russian pipeline that would cross through the Baltic Sea into Germany.

Canada has "significant concerns" with the Nord Stream 2 pipeline project, which would bring gas from Russia to the Baltic coast of Germany, Foreign Affairs Minister Chrystia Freeland said Wednesday.

She said she has discussed the issue with Ukraine, which opposes the pipeline because of the leverage it would give Russia over European countries.

At the summit's opening, U.S. President Donald Trump railed against what he characterized as a "massive gas deal" between Germany and Russia, calling it inappropriate. He said the deal makes Germany "captive" to and "totally controlled" by Russia, and he urged NATO leaders to take a closer look at it.

It is unusual for Trump to express concerns about Russian behaviour. His meeting with Russian President Vladimir Putin in Finland next week is generating widespread concern.

Trump has dismissed the assessment of his own intelligence agencies that Russia tried to meddle in the 2016 presidential election that brought him to power. And he has affixed a "witch hunt" label to the investigation by special counsel Robert Mueller into potential co-ordination between Russia and Trump's Republican presidential campaign.

His remarks Wednesday were a sharp departure from the previous day, when he suggested Putin would pose less of a problem for him during his current European travels than his miserly NATO allies or the European Union's pending Brexit breakup with Britain.

Trump arrived in Brussels lashing out at Canada and other allies for not spending enough on defence. But he quickly honed on in Germany in a terse face-to-face exchange with NATO Secretary-General Jens Stoltenberg.

"Germany is totally controlled by Russia, because they will be getting from 60 to 70 per cent of their energy from Russia and a new pipeline," Trump told Stoltenberg.

"And you tell me if that's appropriate, because I think it's not, and I think it's a very bad thing for NATO and I don't think it should have happened," he added. "We're supposed to be protecting you from Russia, but why are you paying billions of dollars to Russia for energy?"

But Freeland elaborated on Canada's concerns with the project, saying she had discussed it as recently as last week at a conference in Copenhagen on economic reforms in Ukraine.

"When it comes to Nord Stream, Canada has significant concerns about that project," she said. "Canada has been clear in our international conversations with many countries."

Freeland said she had a "good conversation" with the Danish foreign minister because the pipeline "is an issue that touches very much on Denmark."

Denmark, Finland and Sweden are on the long underwater pipeline route that would double the amount of Russian gas Germany receives.

Andriy Shevchenko, Ukraine's ambassador to Canada, said he was "very pleased" with Freeland's statement Wednesday. He said opposing the pipeline is not only in Canada's national security interest but its economic interest as well, because even if it lacks the capacity to ship gas to Europe, it keeps future markets open.

Russia has a long history of cutting off access to energy as leverage over Europe and that won't stop, he said.

"They will use that to weaken the European Union, to divide the European allies," Shevchenko said in an interview. "It's not just about Ukraine."

Several eastern European countries oppose the pipeline, saying it would give the Kremlin greater sway over the energy needs of the entire continent.

Freeland has been a vocal opponent of Russian meddling in the affairs of democratic countries. And she has been a steadfast defender of Ukraine, which saw its Crimean Peninsula annexed by Russia in 2014 and continues to contend with Russian-backed separatists in its eastern region.

"We discussed it with Ukraine," Freeland said. "So, Canada is clear with our partners about the concerns that we have with Nord Stream."

Freeland also went out of her way not to overstate the newfound simpatico with the Trump administration on this one issue, saying Canada has imposed sanctions on Russia "in close collaboration with our European and U.S. allies."

German Chancellor Angela Merkel — who grew up behind the Iron Curtain in communist East Germany — shot back at Trump.

"I've experienced myself a part of Germany controlled by the Soviet Union," she said.

"I'm very happy today that we are united in freedom as the Federal Republic of Germany, and can thus say that we can determine our own policies and make our own decisions — and that's very good."

Merkel meeting with Putin for talks on Syria, Ukraine