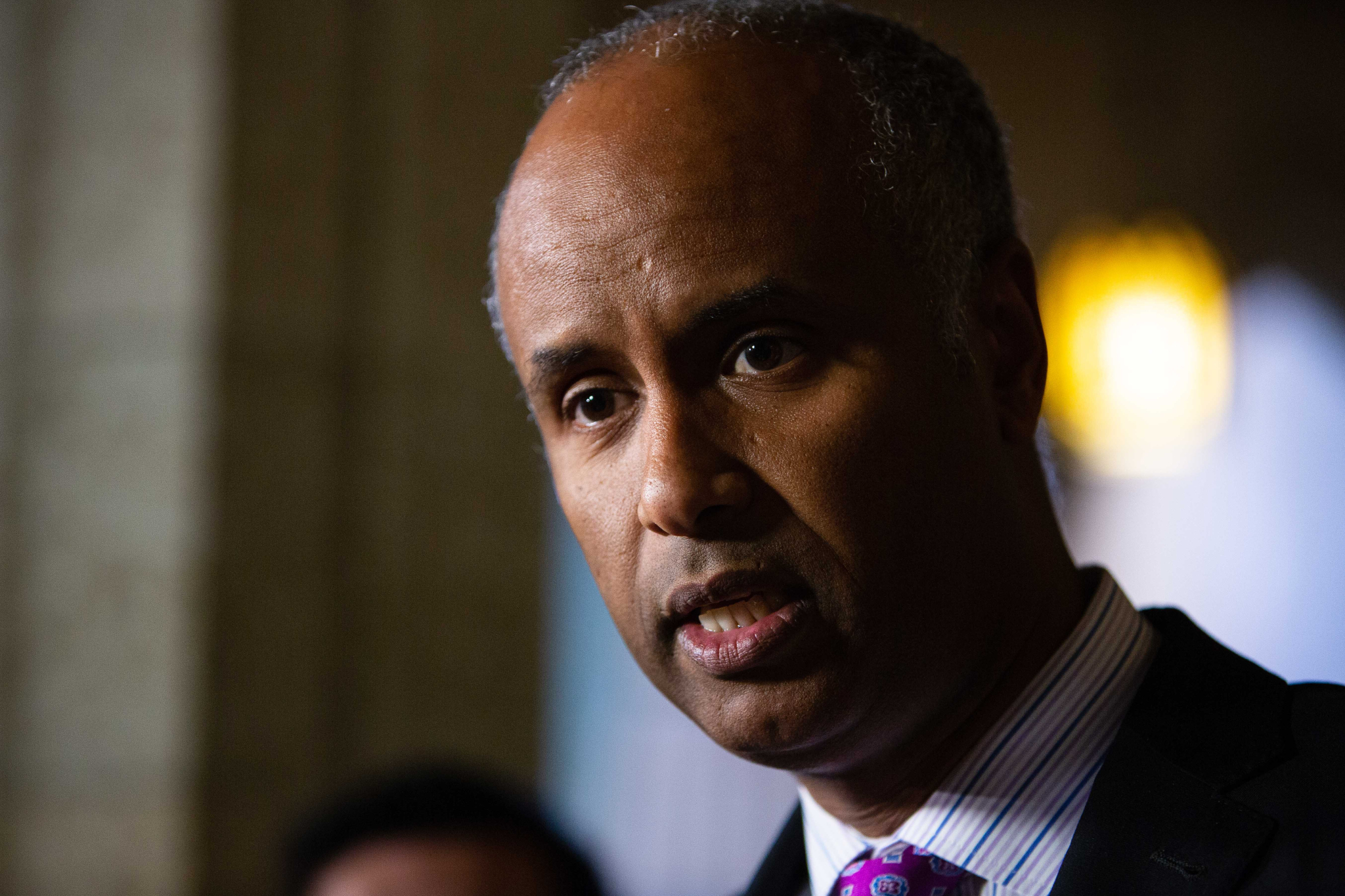 The federal minister was speaking to media after a meeting of the Federal-Provincial-Territorial Forum of Ministers responsible for Immigration in Winnipeg. MacLeod stood in the back of the room, declining an invitation to join a panel that included Hussen and seven other provincial and territorial ministers.

MacLeod is the new Ontario minister responsible for immigration as well as children, community and social services, and women’s issues.

"Our presence in front of you indicates we are a team working together to ensure a better future for all our citizens," Hussen said. "Unfortunately, the province of Ontario isn't part of the communique. I can see the (Ontario minister) is in the room but not joining us at the podium."

"It's not too late minister, I encourage you to come and join us," he added. "You are part of the Canadian family."

Minister should 'apologize for calling me un-Canadian,' says MacLeod​

The ministers responsible for immigration from the governments of Ontario and Saskatchewan refused to sign the meeting's communique on Friday, stating that the inflow of asylum seekers to Canada is the result of "federal policy decisions."

In a separate press briefing, MacLeod reiterated that Ontario would not sign any communique because the onus is on the federal government to provide all funding for the settlement and integration of Ontario-based asylum seekers.

MacLeod said asylum seekers are costing the city of Toronto $90 million in social assistance and $75 million in shelter. Ottawa has pledged $11 million to help.

In a joint statement with MacLeod, Saskatchewan Immigration Minister Jeremy Harrison called for the federal government to fully fund the settlement of asylum seekers.

"Canada has yet to follow through on a commitment to fully support refugee transition, and there is now added pressure for provinces to also support asylum seekers," Harrison said in the statement.

MacLeod demanded an apology from Hussen in her comments.

"I think the minister should sit down, have a nice cup of tea, calm down a little bit, and maybe phone me and apologize for calling me un-Canadian," Macleod said in her press briefing.

"$90 Million on social assistance costs. $74 Million on Toronto costs. $11 Million on Ottawa (City) shelter costs. It’s not too late, Minister, to make Ontario whole and to apologize for your attacks against me," she wrote in a tweet.

'Unfortunately, Ontario has chosen to step away from the table'

The meeting was a gathering to discuss several pressing issues including irregular migration, economic migration, and settlement and integrations.

"We talked about all those issues but unfortunately Ontario has chosen to step away from the table. They've failed their municipalities because they are saying they don't have anything to do with (these issues)," he said. "The track record of collaboration between Canada and Ontario is being challenged by the new government."

Hussen said the issue of housing for refugees and asylum seekers are "shared responsibilities." The federal government has vowed to help all municipalities with the added stress on housing, including Toronto, with money heading to these cities at the end of July.

The number of people who are living in Toronto's temporary housing, set up at university campuses, have declined from 800 to 650, too.

Hussen called out Doug Ford's government for more than their non-cooperation in these matters.

"Ontario, sadly, has chosen the language of fear and division," he said. "They've chosen to intentionally use language that can potentially criminalize asylum seekers in the minds of Canadians. They've intentionally chosen to use false language with respect to queue jumping when we have told them over and over again there's no such thing."

Hussen noted this was the same language used under Stephen Harper's federal government, which "Canadians rejected," he said. "I hope they reject it again."

He called the combination of non-cooperation and aggressive language "irresponsible, divisive, fear-mongering and not Canadian." He said asylum seekers are not "illegal," as claimed by the Ontario government and that Canada has a responsibility to grant them all a fair hearing.

"What Ontario is doing is they are taking these issue...they're calling it a crisis, they are victimizing the people, they're demonizing them, they're trying to pit one group of newcomers against the the other," he said. "I will assure you, on behalf of all Canadians, I will fight back against that narrative of fear with fact."

Editor’s note: This article was updated at 7:40 pm on July 13, with additional quotes from Lisa MacLeod and Jeremy Harrison.

The Federal Liberals are in

The Federal Liberals are in line for a name change. The "Divide and Conquer Party" is much more fitting their persona. On the topic of illegals? Justin owns that colossal blunder.