Opponents of the Kinder Morgan pipeline expansion protest in kayaks

Opponents of the Trans Mountain oil pipeline expansion gathered on traditional Tsleil-Waututh territory to launch a 'flotilla' of boats to the Westridge Marine Terminal in Burnaby. The group was led by four traditional canoes supported by around 100 people in 70 kayaks and was joined by international crews from the Greenpeace ship Arctic Sunrise, which was seized at gunpoint in 2013 by Russian authorities after a demonstration against oil drilling.

Tsleil-Waututh elder Ta’ah Amy George led paddlers in ceremony, song, and prayer. The kayakers edged close to the razor wire fence on the water, around the Westridge terminal.

"As a Tsleil-Waututh youth, I have learned from my peoples the importance of the water - the way it sustains us and nurtures every aspect of our lives," Oceann Hyland, a 21-year old youth leader, said in a statement. She urged people to "protect what is sacred, to protect our culture, lands, waters and all living beings." 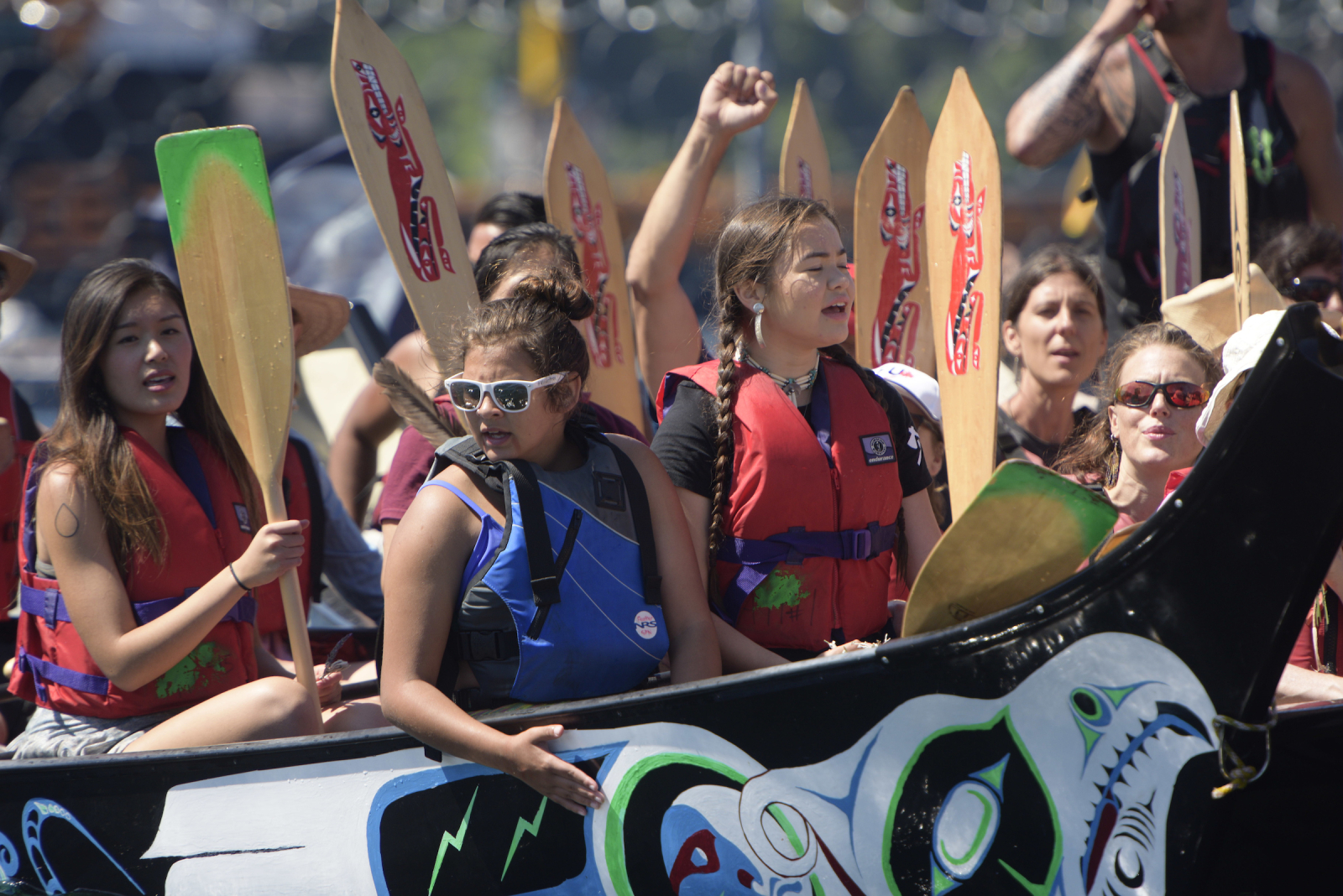 Around 100 kayakers demonstrated on July 14, 2018, against the Kinder Morgan pipeline expansion. Photo by Liam Olsen/Greenpeace

Cedar George, another youth leader at the protest, thanked participants for "working toward a sane future," referencing the climate impacts of the pipeline expansion project. On May 29, the federal government came to an agreement with Kinder Morgan to purchase for $4.5 billion. 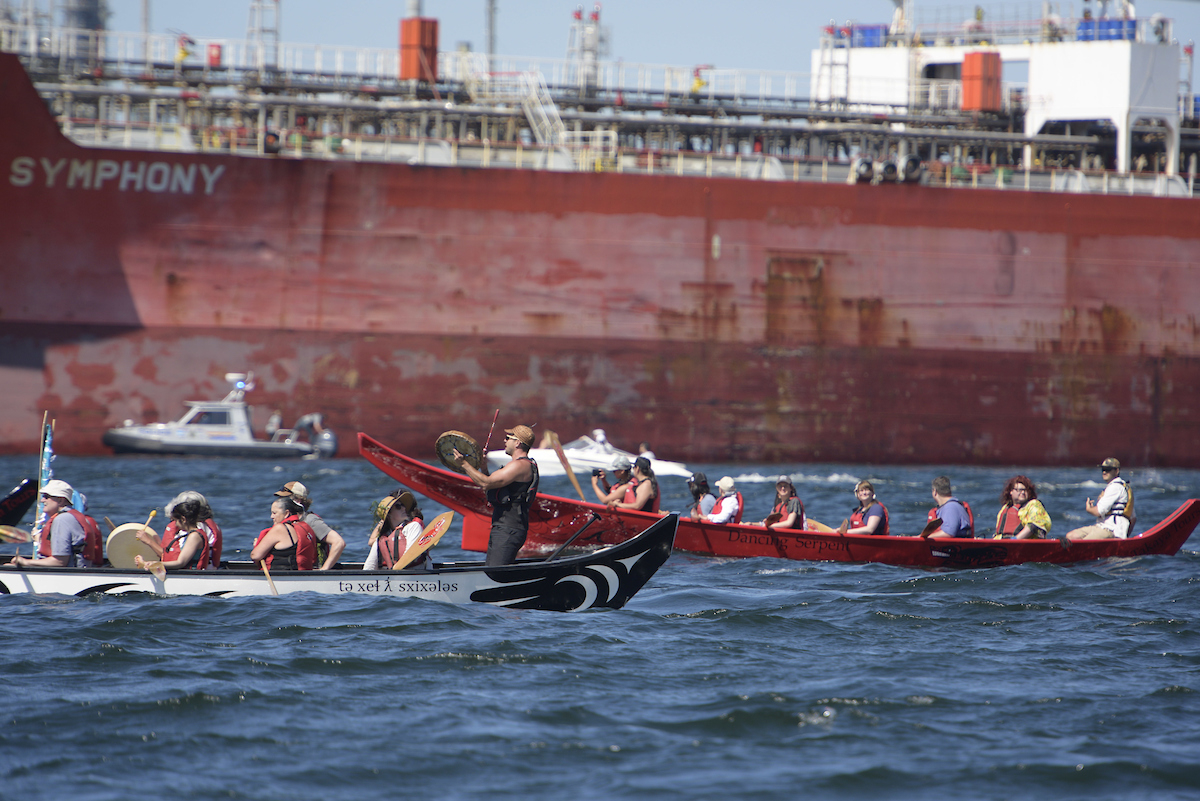 The expanded Trans Mountain facilities would triple the capacity of an existing pipeline system to ship up to 890,000 barrels per day of heavy oil and other petroleum products from Alberta to the west coast. Supporters of the pipeline, including both the federal and Alberta governments, say it would drive growth and support a transition that enables action on climate change. Opponents say the project could lead to spills and push Canada's climate change goals out of reach.

"We recognize there are a variety of opinions about our project and we respect the right to peacefully demonstrate," Kinder Morgan commented in an email to National Observer. "When it comes to our operations and construction sites, safety is our first priority — safety of our workers, communities and everyone near our facilities. There were no impacts to our operations today."

There's a lot to be proud of

There's a lot to be proud of on the water. Thank you everyone for caring. It's unfortunate Ottawa is betrothed to big oil, gas and lobbyists.

Don't just cheer, send money. This fight is far from over, and if you can't be there on the ground, find an organization that is, and support them. Coast Protectors come to mind, Raven Trust has amassed a goodly legal defence fund from sustaining supporters....we can all join those initiatives, even from afar.

It's empowering to be part of something brave and free.........like these canoes and their paddlers.

How is it that the private

How is it that the private fence on the water is still in place? Surely this is an enormous Hazard to Navigation and should have been dealt with by the Canadian Coast Guard. Does anyone know of official approval or permitting for this?

Even if a property owner obtains a Water Lot Licence for a dock, they are not allowed to impede public passage on the beach or on the water.

How can one not like the idea of First Nations protecting the environment, when Kinder Morgan's only interest is a scorched earth policy, for near-term profits.
It looks as if the Canadian taxpayer will be saddled with a 65-year old metallurgical relic (aka sieve), while Kinder Morgan walks away with $4.5 Billion in a sovereign guarantee. As they say in Texas and Los Vegas, a sucker is born every day (aka PM). The smiley Grinch face of Finance Minister, Bill Morneau has just stripped the Canadian Christmas Tree and left Whoville deeper in debt, with poorer air and water quality. His head has shrunk 3 sizes they say.