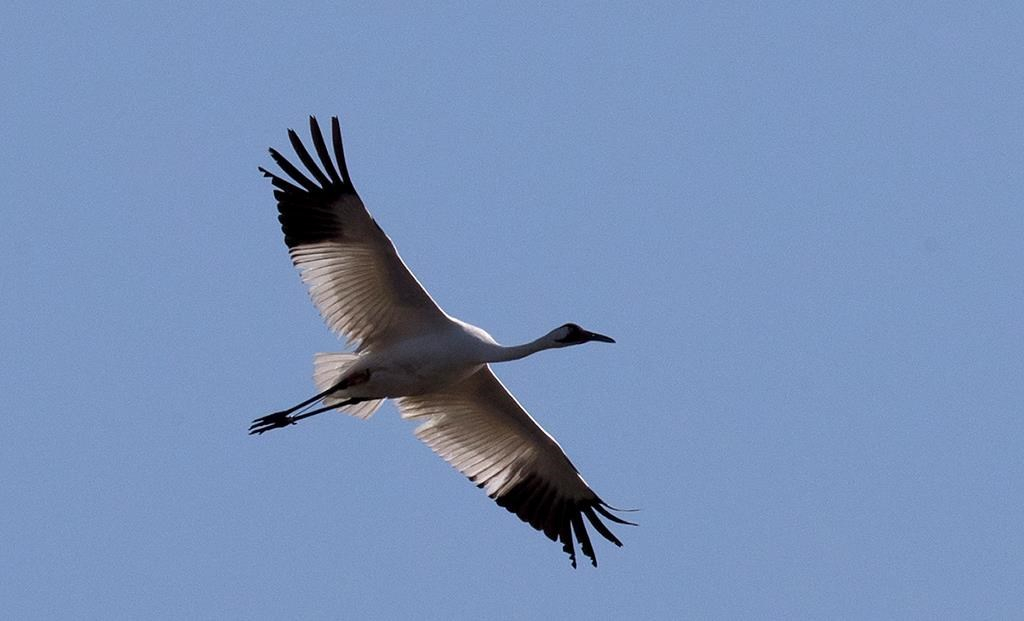 In a southwest Louisiana crawfish pond, two endangered whooping crane chicks peck about for crawfish, insects, plants and other food. They're only 2 months old, but they dwarf the full-grown great egrets nearby. Their tall white parents bugle alarm at an ATV and people across the pond, and all four cranes move farther away.

Across the state in New Orleans, a downy captive-bred brown chick scampers after a keeper whose white costume looks like a Halloween ghost. She bends over and uses a crane puppet-head to pick up an insect and pass it to the chick.

The chicks — both those in the wild and captivity — are part of generations of work to bring back the birds, which barely escaped extinction in the 1940s. This year, Louisiana scientists are celebrating a milestone — five chicks born in the wild. That's the highest number of hatchlings in Louisiana's wilds since scientists started reintroducing the birds there in 2011.

"We're excited," said Sara Zimorski, a biologist with Louisiana's Department of Wildlife and Fisheries. "That's the most that have hatched since the program began."

Biologists estimate more than 10,000 whooping cranes lived in North America before habitat loss and overhunting nearly killed them off. The birds can grow as tall as 5 feet (1.5 metres) with black-tipped wings that span nearly 7 feet (2.1 metres). Their bodies are covered with soft, white feathers; colored skin on their heads forms a black mask and red cap.

Their numbers dwindled to 21 in the 1940s, including a handful in Louisiana. That's grown to 670 today — about 510 in the wild, the rest in captivity.

"Whooping cranes are native to Louisiana. We used to have them here, all over the place, and most people don't even know what they look like anymore, which is rather sad," said Heather Holtz, a crane keeper at the Audubon Nature Institute's Species Survival Center.

The only truly wild flock migrates between Texas and Alberta, Canada, and makes up about two-thirds of all birds in the wild. Scientists worried they were vulnerable to being wiped out by a natural disaster or other event, so they're raising birds in captivity and releasing them in Louisiana and Wisconsin.

The Audubon Nature Institute's Species Survival Center in New Orleans is one of several places where scientists are raising birds in captivity. This is the centre's second season costume-raising whooping crane chicks, but the staff had experience from decades raising their smaller grey cousins, endangered Mississippi sandhill cranes.

Basically, they imitate their parents. Chicks must be taught to eat and drink, and then must be exercised many times daily.

To ensure the chicks don't take to people, keepers wear "crane suits." Hooded white ankle-length robes hide the human shape; a big square of black mesh lets a wearer see out while hiding the face. One sleeve is covered by the tight white neck of a crane-head puppet with a movable beak. The intricately detailed heads were carved and painted by a Japanese artist.

Black rubber boots complete the costume. The chicks can identify people who took blood or did other veterinary procedures by their shoes, said Richard Dunn, the centre's assistant curator.

Once the birds get into the wild, there's not much scientists can do to help.

Sixty-four adult birds and five chicks live in the wild in Louisiana. But only six — this year's chicks and one hatched last year — were born there. The rest were raised in captivity.

Captive-raised birds were released on state-owned wetlands in southwest Louisiana and spread out from there. About half settled around crawfish ponds, scientists say, possibly because that offers easy access to foods they like and a broad view to watch for predators such as bobcats, coyotes, mink and bald eagles.

The captive-raised birds have trackers, but during nesting season biologists pay closest attention to nesting pairs.

Zimorski and other biologists check nests and chicks twice a week, driving an ATV across narrow strips of land between crawfish ponds and using binoculars and a long-lens camera — the birds are too wary for close-up work. Nests in big marshes are checked about every two weeks, because that requires flying over them in a small plane.

Those hatched this year include two from eggs laid in captivity. The five chicks are 8 to 11 weeks old, Zimorski said.

Their survival shows costume-raised birds can be good parents, she said.

Good news; thanks for the

Good news; thanks for the uplift!