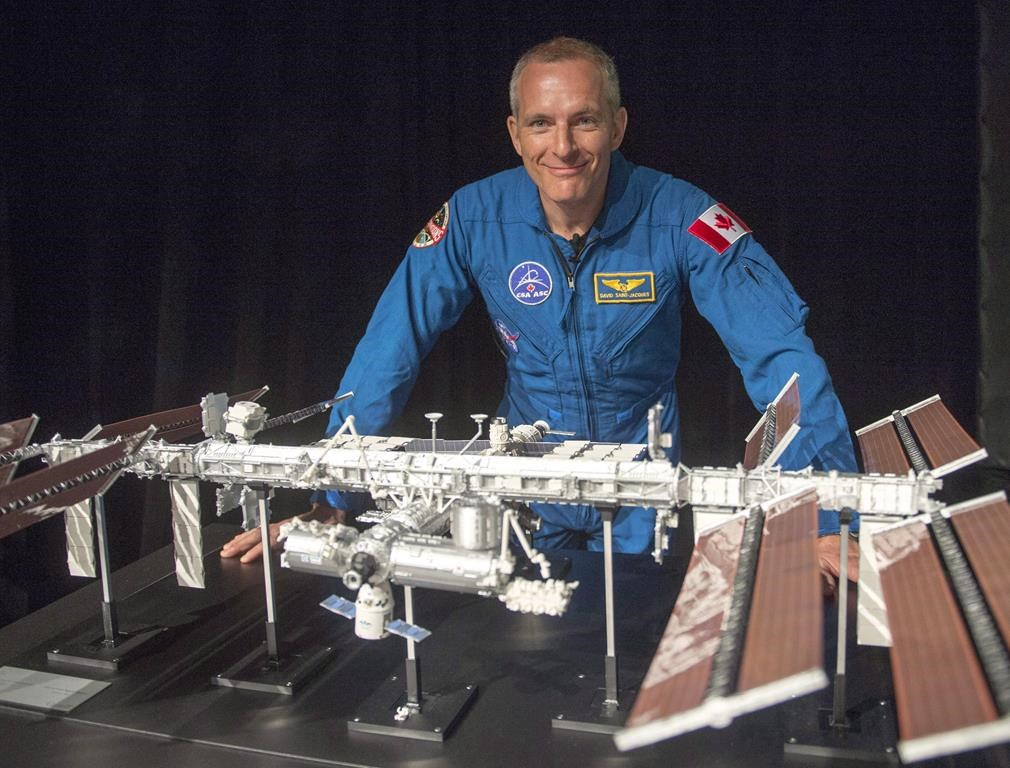 Canadian astronaut David Saint-Jacques, who blasts off for an extended stay on the International Space Station in December, helped launch a moon rock exhibition Friday at the Montreal Science Centre.

Visitors will be able to touch the lunar sample, which is 3.8-billion years old, weighs 24 grams and is only as big as an eraser.

It wasn't a coincidence that the exhibition was officially unveiled on the 49th anniversary of the first manned lunar landing by American Apollo 11 astronauts on July 20, 1969.

Saint-Jacques touched the science centre's latest attention-getter, which was collected during the Apollo 17 mission in 1972.

But he admitted to reporters that he doesn't expect he will be going to the moon in the future.

"I think it's for the next generation of astronauts," he told reporters Friday. "Not for me."

But Saint-Jacques said he would like to see the lunar footprints of Canadians.

"Materially and physically, it's a possibility obviously," he said. "These are political decisions, program decisions, but I think we should.... It will be an incredible source of inspiration for everyone."

Saint-Jacques, who launches for the orbiting space laboratory on Dec. 20 on board a Russian Soyuz craft, will celebrate his 49th birthday on the space station on Jan. 6.

But his mission will end before the 50th anniversary of the late Neil Armstrong's "small step" on the lunar surface.

"The schedule is still open to debate ... but I'll be back on Earth," Saint-Jacques said Friday.

In the meantime, he has a full schedule for the next five months before he heads for space.

"We're focusing on my training on how to be the best pair of eyes and hands for the scientists on the planet who have been developing all these experiments I'll be doing," he said.

"I also have to learn how to do experiments on myself, because I will be the subject or a guinea pig for a lot of those experiments."

The science centre claims its moon rock exhibit is only the 10th of its kind in the world.

Before travelling to Montreal, it was stored at NASA laboratories, where it was protected from the Earth's atmosphere. The basalt rock had never been touched before, except by the NASA experts who prepared it for its trip to Montreal.

Employee Sara Arsenault, who went to Houston to pick up it up, said she saw lots of samples collected by U.S. astronauts that are kept in special cabins.

Arsenault, 38, added that everything in Houston was spacey — "from the street names to the chewing gum brands ... space is everywhere."

The moon rock will be the star of the science centre's new "Water in the Universe" zone.

One of the other objects that visitors will also be able to examine is the lunar module landing-gear legs, which were manufactured by the Quebec company Heroux-Devtek and used on all the Apollo missions.