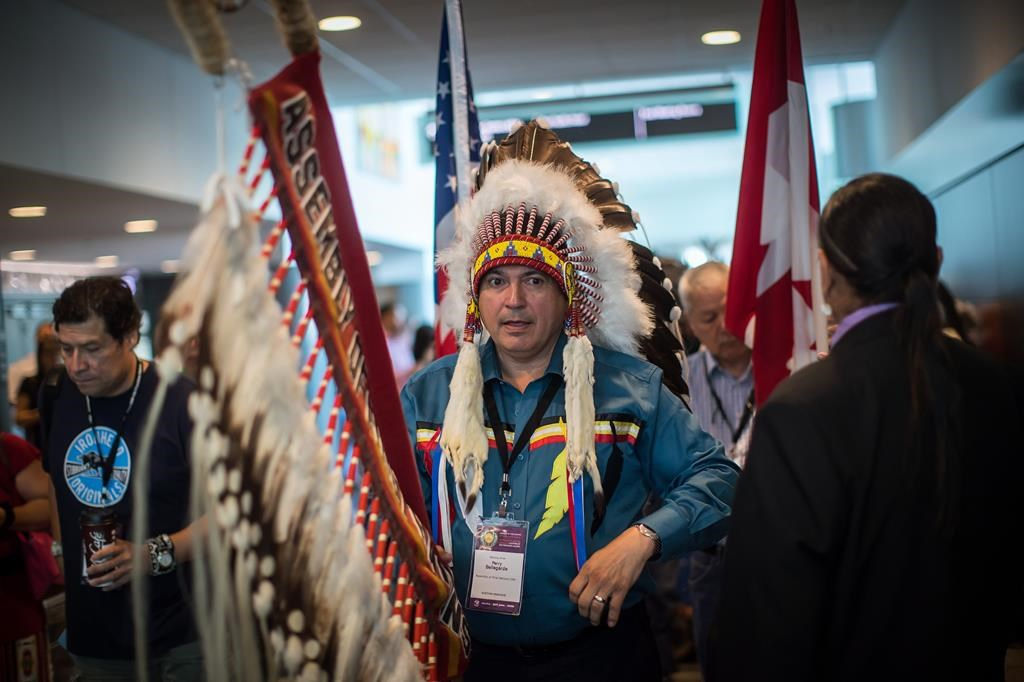 Assembly of First Nations National Chief Perry Bellegrade holds the eagle staff as he waits to lead the grand entry at the opening of the AFN Annual General Assembly, in Vancouver on Tuesday, July 24, 2018. Photo by The Canadian Press/Darryl Dyck
Previous story
Next story

Candidates vying to lead the Assembly of First Nations are calling for stronger alliances between nations across Canada to deal with outstanding issues such as land claims.

Perry Bellegarde, the incumbent at the helm of the country's most influential advocacy group for First Nations, said legal, political and activist measures must be taken by First Nations to assert their sovereignty.

"You're going to have a heck of a time with the premier of Ontario now, so you have to look at a legal fight, no question," Bellegarde said Tuesday about the recent election of Doug Ford in response to a question from a delegate at the annual general assembly of the Assembly of First Nations.

Bellegarde said putting pressure on the federal government via the United Nations would be a way "to embarrass Canada as a nation state."

Chiefs from 634 First Nations communities are set to elect a national chief Wednesday.

The other candidates running for the top job are Russ Diablo from Quebec, Sheila North of Manitoba, Miles Richardson from British Columbia and Katherine Whitecloud of Manitoba.

Bellegarde, who has been accused by other candidates of being too cosy with the federal government during his leadership role since December 2014, earlier told delegates that First Nations must find ways to better their relationship with the Crown as they look to improve the social determinants of their people, including health and education.

Richardson told delegates that building alliances is the only way for First Nations to create change and assert sovereignty, as was done by the Haida Nation, which occupies the archipelago of Haida Gwaii, 100 kilometres west of the northern coast of B.C.

"Over the last 15 years the Crown governments have had to come forward and affirm our legislation. We led that initiative," he said, adding he would use that experience to lead the Assembly of First Nations.

"The key for us, in the AFN as a leadership role, is to define our rights and title, our treaty rights, according to our view, to build our governance institutions and our capacity to implement those and stand together."

Richardson said First Nations are dealing with a federal government that doesn't recognize their rights or nationhood, leaving them to establish respectful nation-to-nation relationships.

"If the Crown doesn't honour existing treaties what's the point of negotiating new ones?"

"We know who we are. We need to define who we are in effective terms, in a modern way and stand up and exercise that," he said, calling on chiefs to "throw off the oppression of the Indian Act," which was established in 1876 to control land, resources and other aspects of First Nations life.

"I'm here to tell you that is a dead end," Richardson said, adding the "colonial" act keeps First Nations dependent on the federal government as they "continue to take crumbs off their table in our own territories."

Whitecloud told delegates nationhood begins with them taking responsibility for themselves and their own future.

"Establish a new relationship," she said. "Don't allow (the federal government) to tell you how you can govern yourself and your people."

He said the United Nations Declaration on the Rights of Indigenous People, which has yet to be ratified, gives First Nations the right to their traditional lands, territories and resources.

"If they want to challenge us we should have political support to back up our people to exercise their rights to our land."

Diablo said the federal government's commitment of $17 billion to Indigenous priorities in the last three budgets is "pennies to the dollar" when it comes to the needs of First Nations, which need sustainable economic development.

"If I get elected, Ottawa's not going to like it," he said.

North, of Manitoba, said she would build a more united Assembly of First Nations if elected to head the organization.

"The AFN needs to become the legal advocate that our communities need right now," she said, calling for the group to be revitalized.

"We don't need an AFN that makes deals with the government," she said, adding the organization is currently too close to Ottawa.

"It should support your decisions rather than make them for you," she said.

"We need a national chief who can sit at the table with the Liberals, without becoming one."