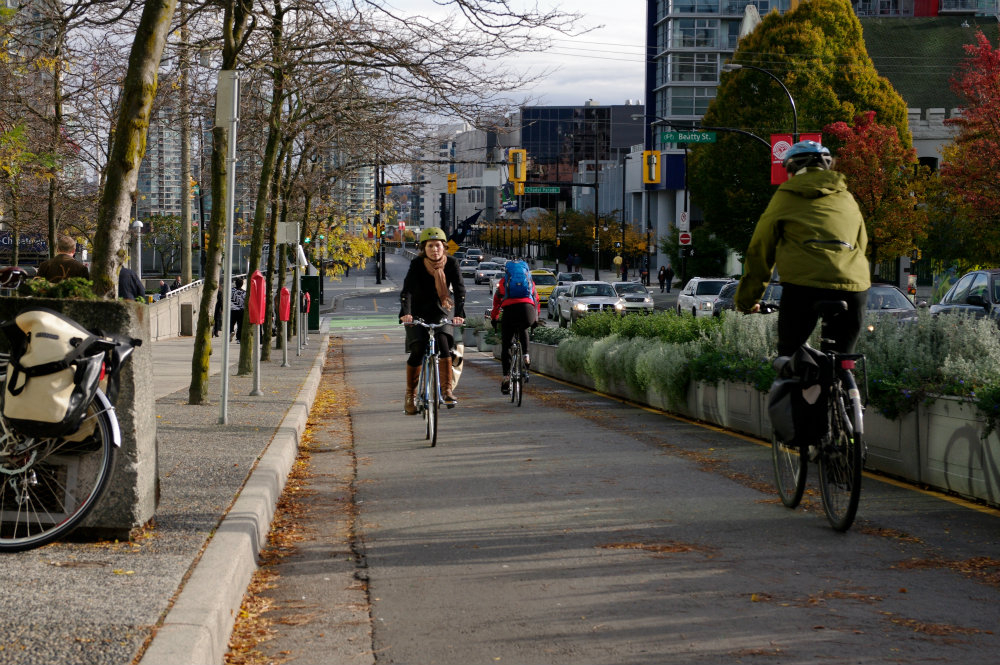 The B.C. government recently outlined some of their high-level ideas on climate action in a set of discussion papers. The transportation proposal is weak, and incomplete – with more ideas promised later. It seems that the Green Party-supported NDP government needs a strong push to produce a climate plan capable of meeting their greenhouse gas (GHG) pollution reduction targets.

Before focusing on the weaknesses in the transportation paper, it is important to celebrate a few of the stronger policies. The transportation paper proposes a zero emissions vehicle mandate requiring automakers to sell an increasing percentage of electric cars, starting in 2020. Plug-in electric ferries are also on the table. The buildings paper proposes enabling local governments to phase out the use of fossil fuels for space and water heating, as the City of Vancouver is doing through its Zero Emission Building Plan. These and other effective policies will be attacked by oil and gas corporations, and will need public support to survive and be implemented.

Another key strength of the discussion papers is the aspiration that effective climate action “will improve our quality of life – today” for everyone, including those living on lower incomes. Other jurisdictions have shown this is possible with carefully designed climate action. Effective climate action in the transportation sector can also be designed to increase the number of good jobs in B.C.

Transportation accounts for 39 per cent of B.C.’s GHG pollution, and the paper notes that “emissions from transportation are rising – up one per cent since 2007.” What is missing is an admission that this resounding failure is a result of past provincial policies and that if municipalities, such as the City of Vancouver, had not taken action the situation would be even worse. Also missing is the provincial NDP’s commitment to reduce GHG pollution from transportation 30 per cent below 2007 levels by 2030. That is a reduction of 31 per cent below 2018 levels in 12 years, or about 2.5 per cent per year.

This is an ambitious target, but not compared to what some other jurisdictions are achieving. Anne Hidalgo, the Mayor of Paris, France is aiming to cut automobile traffic in half, and has cut traffic volumes by 7 per cent since the beginning of the year. Paris’s successes have largely been achieved by re-allocating space to transit lanes, protected bicycle lanes, and most famously by creating very popular artificial beaches along the River Seine. These actions are popular primarily because they improve the quality of life and reduce local air pollution – reducing GHG pollution is a crucial bonus.

In 2002, Bertrand Delanoë, the newly-elected Socialist Party mayor of Paris, created a controversial temporary summer ‘beach’ on the Georges-Pompidou expressway. The expressway, on the right bank of the Siene, was built in the late 1960s just as freeway revolts seized Canadian and US cities. What was once a noisy expressway is now a well-loved riverfront park.

Car traffic quickly expands to fill expanded road space in urban areas. And the opposite is also true; when you make a car lane into a bus lane or replace an expressway with a beach, traffic disappears. And traffic speeds don’t usually change much, if at all.

Billions on the line

Transit lanes, protected bicycle lanes, as well as pedestrian only streets and plazas have gradually eroded the grip the automobile once had on Paris life. According to CityLab, the share of trips by car is already down about 45 per cent since 1990. Now the present mayor of Paris has decided to accelerate the trend, even if that means fighting the federal government to expand Paris’s riverfront beaches.

There is no way for us to meet our GHG targets if governments continue to spend billions on projects that increase GHG pollution, writes @Eric_Doherty. @jjhorgan @GeorgeHeyman #bcpoli #climatechange #carbon

The transportation discussion paper mentions the Pan Canadian Framework on Clean Growth and Climate Change, but does not discuss the fact that this federal-provincial climate agreement already commits the government of B.C. to shift spending away from things that increase carbon pollution, such as urban highway expansion, to low-carbon transportation including public transit, walking and cycling. There is no way for us to meet our GHG targets if governments continue to spend billions on projects that increase GHG pollution.

A report I co-authored, Transportation Transformation: Building complete communities and a zero-emission transportation system in BC, estimates that a billion dollars a year could be re-allocated from projects that increase GHG to climate solutions. This crucial policy shift must be implemented now, and be front and centre in the climate action plan the B.C. Government will release in the fall.

Just one example of how much money is on the line is the proposal to replace the four-lane Massey Tunnel with a ten-lane freeway bridge costing over three billion dollars. The NDP government has put the ‘Massey Bridge’ boondoggle on hold, but have not cancelled it yet.

The measures needed to overcome our over-dependence on private automobiles and fulfill our climate commitments include much better highway bus service. But the crisis in long distance transportation in B.C., which pre-dates Greyhound Bus’ abrupt decision to pull out, is not even mentioned in the transportation paper. If we want fewer cars choking our cities, people without cars need convenient and affordable ways to travel to and from smaller communities.

Another weakness of the transportation paper is the naïve acceptance of manufacturers’ claims for liquid biofuels (primarily biodiesel and ethanol). The climate benefits of liquid biofuels are often grossly overstated; the European Commission has committed to phase out food-based biofuels. Environment and Climate Change Canada has also committed to review the GHG footprint of biofuels, which should result in a more honest appraisal. Europe’s experience shows that extreme caution is needed with biofuels; renewable electricity is the best form of energy to replace fossil fuels in most transportation applications.

The provincial government wants to hear what you think about their discussion paper on climate action in the transportation sector. Please sit down with a cold drink and email your thoughts to [email protected] before August 24.

May hopes for Trump intervention on Kinder Morgan

By Elizabeth McSheffrey | News, Energy | August 19th 2016
Reports from the Race to a Safer World

Right on, Eric! Thanks for

Right on, Eric! Thanks for this analysis.

I recently read that someone

I recently read that someone in India had invented a car that runs on water. It
puzzles me that there seems to have been no coverage of this in our media, nor that
any governments here have looked into it.

Offering plans for the future

Offering plans for the future to cut down our GHG emissions is a sane conversation. Thank you for this little light of hope.

Thanks so much for this. I

Thanks so much for this. I suppose improving tourists' experiences encourages these changes in Paris. Actually, Victoria's tourist industry is very important too.