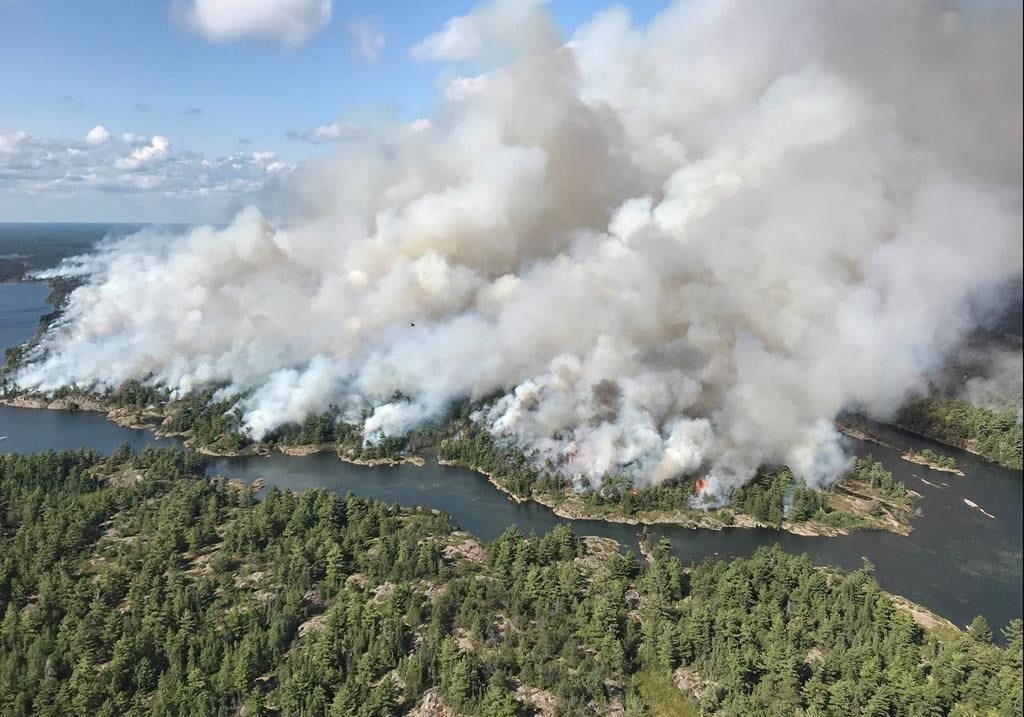 An aerial view taken over the Parry Sound 33 fire is shown in this handout image. The blaze, known as Parry Sound 33, sprung up on July 18. Handout photo by AFFES Ignition/Response Specialist-Dan Leonard
Previous story
Next story

Ontario's Ministry of Natural Resources says dozens of forest fires remain out of control, with the most pressing in the province's northeast now measuring more than 82 square kilometres.

According to the ministry's website, there were 39 active fires in the northeastern part of the province as of Sunday evening, and 14 of them remained out of control.

The most pressing in northeastern Ontario, known as Parry Sound 33 blaze, has been raging for more than a week, and continues to threaten a stretch of the Trans-Canada Highway and a Canadian National Railway line.

But McCool says if the smoke is heavy enough, police may close a portion of the Trans-Canada, designated Highway 69 in the region.

In the northwest, dozens of new fires were sparked over the weekend, bringing the total number of active blazes in that region to 94, with 27 designated "not under control."

Ryan Murrell, fire chief in Dryden, Ont., said his department is "monitoring the situation" and is prepared to evacuate people if the fires get worse.

"We're making sure that Red Cross has the right stretchers available ... but right now there's really been no communities under threat," Murrell said in a phone interview Sunday evening.

Scientists say that forest fires are becoming more frequent and intense due to climate change caused by human activity. This includes the consumption of fossil fuels such as oil, gas and coal, which releases pollution that traps heat in the atmosphere and warms the planet.