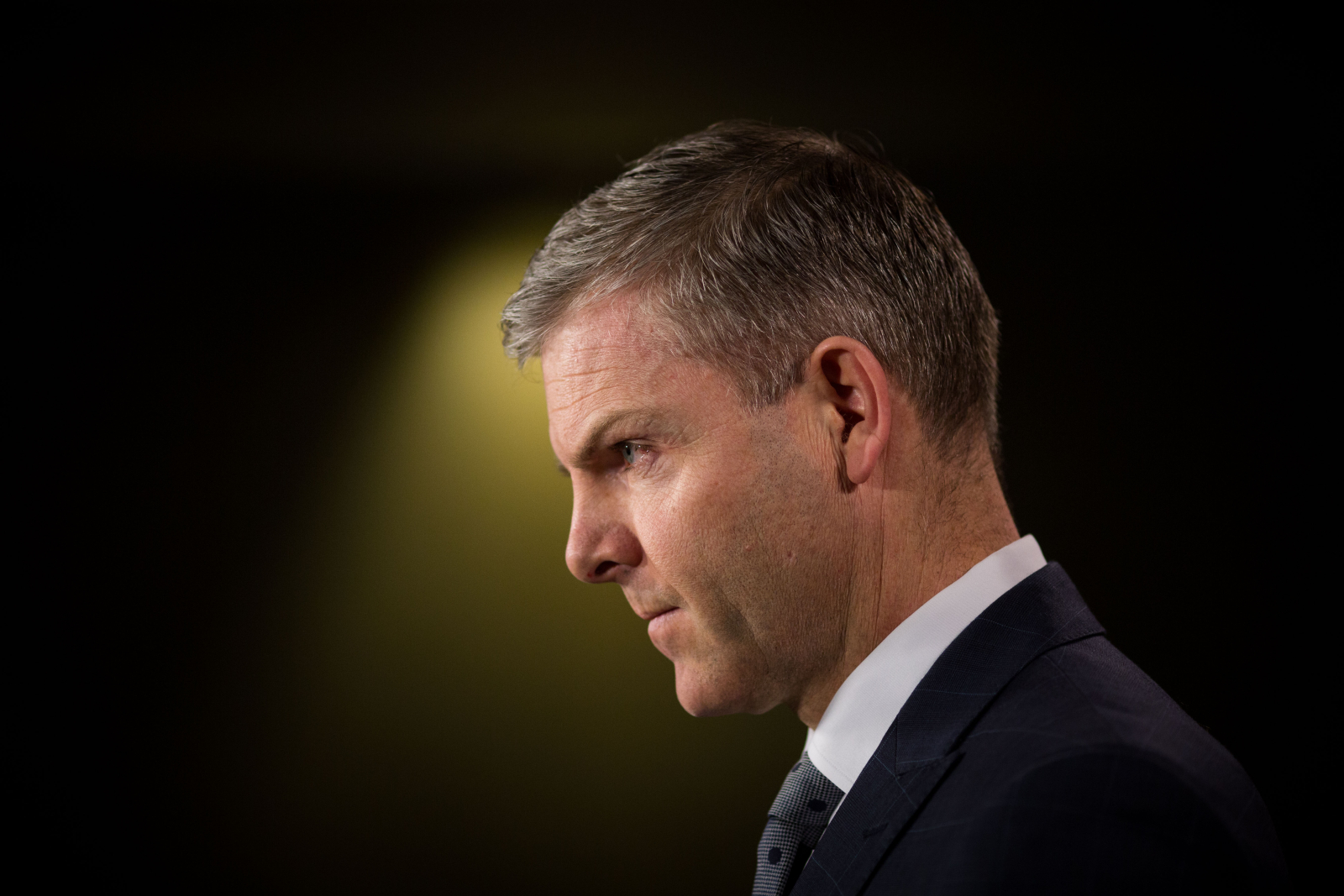 Canadian Association of Petroleum Producers president and CEO Tim McMillan holds a press conference in the Charles Lynch Press Theatre in the Parliament of Canada in Ottawa on Feb. 26, 2018. Photo by Alex Tetreault
Previous story
Next story

Ontario’s electoral watchdog has been asked to probe whether Canada’s largest oil and gas lobby group broke the law during the recent election campaign.

The ad campaign targeted voters in 13 Ontario “Liberal swing ridings," according to a flyer distributed by CAPP officials at a government-sponsored summit in Vaughan, near Toronto. The campaign ended a few days before the June 7, 2018 election that brought Premier Doug Ford's Progressive Conservatives to power.

Greenpeace Canada and Democracy Watch have laid out details of CAPP's campaign in Ontario, which included billboards in “high visibility locations” in the Toronto area and 400,000 pieces of pro-pipeline literature sent to households via Canada Post.

The campaign, which ran between April 8 and May 29, was uncovered in June by an ongoing National Observer / Toronto Star / Global News investigation.

Ontario’s Election Finances Act requires registration as a third-party advertiser if an individual or entity that is not a candidate or political party spends $500 or more on ads that address issues raised by parties or candidates.

In their submission to Elections Ontario, the two organizations called CAPP’s ground campaign an attempt “clearly aimed at affecting voters support for 8 political parties” that was “unprecedented.”

According to Elections Ontario's policies, the next step is for Chief Electoral Officer Greg Essensa to acknowledge receipt to the person or body in question, if he decides to investigate.

The ads in question did not identify CAPP as the main funder. They were fronted by a group called Canada’s Energy Citizens, which was created and managed by CAPP to drive public support for oilpatch-friendly policies in Canada.

Neither CAPP nor Canada's Energy Citizens were registered as third-party advertisers for the recent election campaign.

The advertising material urges Canadians to “tell your federal MP to support the Trans Mountain Pipeline” alongside the message, “Is Canada closed for business?”

The messaging, according to the complaint, touched on provincial election issues, such as carbon pricing and whether environmental regulations are affecting business in Ontario.

Premier Doug Ford’s Progressive Conservative party campaigned against carbon pricing throughout the election, and is in the process of repealing the province's cap and trade system.

Parallel to the time CAPP's "closed for business" billboards were displayed in the Toronto region and on social media, Ford was campaigning that he would be "going down to the border and putting up a big neon sign saying 'Ontario is open for business.'"

“I’m concerned that we’re seeing an increasingly desperate oil industry importing into Canada the front groups and big-money politics that have been deployed so effectively in the United States to delay action on climate change,” said Keith Stewart, a senior strategist with Greenpeace Canada who is one of the complainants.

“Gutting Ontario’s climate plan might prop up their profits for a few more years, but at what cost?”

CAPP spokeswoman Chelsie Klassen said they had not heard of the official request for investigation. “We haven’t been notified of any requests and will not speculate,” she wrote in an email, declining further comment.

Previously, Klassen told National Observer CAPP's campaign "aligned with the federal decision on a federally-regulated pipeline deemed in the national interest, targeting federal Members of Parliament, not candidates of the Ontario election."

A lack of new pipelines and policies to keep us competitive means less benefits for Canadian families.

For example, an April 30 tweet on ‘competitiveness’ from Energy Citizens issued a call to action for individuals to contact “all levels of government” to address “competitiveness."

Some of the tweets used the #onpoli hashtag, Stewart said, were therefore targeting people interested in Ontario politics.

"It is also worth noting that there were five twitter postings from Energy Citizens attacking carbon pricing on June 5 and 6, immediately prior to the Ontario election," he added in this submission.

Both groups believe CAPP's lobbying efforts meet the definition of "political advertising" stated by Elections Ontario. The groups also believe the oilpatch exceeded the allotted spending amount for such a campaign.

"The disclosure requirements and spending limits are there to prevent big businesses and other wealthy interests from undermining fair and democratic elections," said Duff Conacher, Co-founder of the Ottawa-based Democracy Watch.

"Elections Ontario must strongly enforce the law and not create any technical loopholes that can be exploited by these wealthy interests."

Both Conacher and Stewart note that CAPP's efforts to directly target "13 Liberal swing ridings" indicates "a strategy that includes both partisan considerations and an interest in affecting electoral outcomes."

"As a result, it is clear that the campaign was not within the normal parameters of promotion of a program or activity – it was clearly an explicitly political advertising campaign," write Conacher and Stewart in their joint request for investigation.

The advertising blitz should

The advertising blitz should be appreciated by Ms. McKenna and Mr. Trudeau. "We can't leave it in the ground."

"CAPP spokeswoman Chelsie Klassen said they had not heard of the official request for investigation. “We haven’t been notified of any requests and will not speculate,” she wrote in an email, declining further comment."

Ha ha, right! As IF they wouldn't know about the official request about THEM! Ha ha ha

Let's hope these characters are prosecuted as they deserve for a change. Our democracy is at risk; we can't let Canada go down that same road we see to our south.