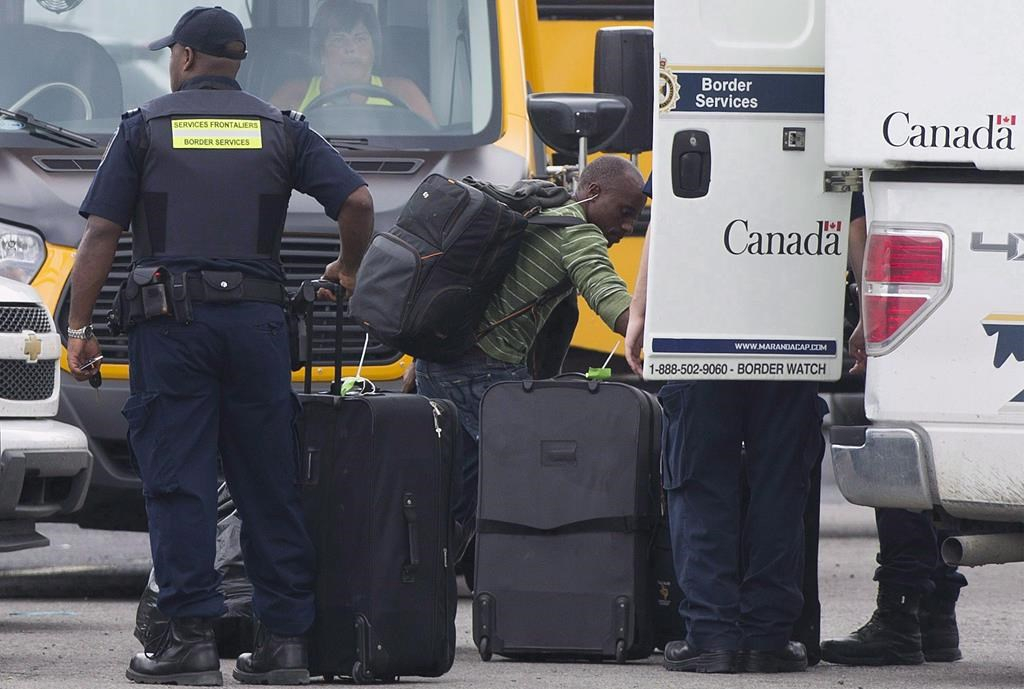 A man removes his belongings from a CBSA truck at a processing centre for asylum seekers at the Canada-United States border in Lacolle, Que. on Thursday, August 10, 2017. File photo by The Canadian Press/Graham Hughes
Previous story

A search warrant from the Canada Border Services Agency (CBSA) alleges 462 applicants to the provincial nominee program used Charlottetown homes belonging to two Chinese immigrants over the past four years as "addresses of convenience."

Lead investigator Lana Hicks says in the document, filed June 13, that she suspects the immigrants didn't come to the Island and settle, contrary to the requirements of the provincial program.

Rather, she alleged their immigration documents are collected and sent on to them, "at their real address elsewhere in Canada or back in China," she writes.

The allegations, which have not been proven in court, come just two months after two Charlottetown hoteliers were charged with aiding in immigration fraud, with the CBSA alleging 566 immigrants used the addresses of the siblings' hotel and home.

The siblings' lawyer recently denied the allegations of misrepresentation in comments to reporters, and said they intend to plead not guilty.

However, the latest allegations, if they lead to charges, would bring the total number of "address of convenience" cases to about 1,000 in the provincial nominee program (PNP), with all but a few of these immigrants gaining permanent residency in Canada.

Permanent residents are immigrants who are not Canadian citizens, but they have been given permission to stay and work in Canada for five years before applying for renewal. They have most of the rights of citizens and can take advantage of social programs, but they can't vote, seek public office, obtain a Canadian passport or hold jobs that require a security clearance.

Under the P.E.I. program, the applicants provide the Island government with a $200,000 refundable deposit, and commit to invest $150,000 and manage a firm.

After the deal is signed, the province nominates the investor to the federal Immigration Department as a permanent resident, which they usually receive in the mail before they fulfil the conditions of setting up a business and living on the Island.

The province has already acknowledged that two-thirds of the PNP businesses in 2016-17, a total of 177 people, didn't get the refundable deposit back, with the majority simply never opening a business.

The June search warrant alleges that the 462 people giving the three Charlottetown addresses are "well beyond what would be expected for single dwelling homes," and says the use of the addresses is "concerning and unreasonable."

"The numbers are indicative of what is known within Immigration, Refugees and Citizenship Canada and Canada Border Services Agency as an 'address of convenience,' which is created to facilitate immigration fraud," writes Hicks.

Hicks based her view that people weren't living full-time at the homes partly on surveillance of the houses, and from "garbage grab" searches of documents thrown out from the homes.

She says the immigrants' statements that they intend to reside in Prince Edward Island are "the whole basis for their approval," and notes that the province's website and forms repeatedly state this requirement and expectation.

The issue of false addresses has been arising in other provinces, say immigration lawyers.

"It undermines the integrity and objective of the (provincial) programs. That's why Islanders and all Canadians should be concerned," said Betsy Kane, a veteran immigration lawyer in Ottawa.

Last year, Chinese immigrants in Vancouver were sentenced to jail and fined for immigration fraud involving 1,600 immigrants for fraudulently helping them obtain permanent residency by measures that "included creating the fictitious appearance of Canadian residency."

The CBSA says that to date it can confirm 81 deportations from that case, with orders to remove 160 other people, with some appeals pending.

Lee Cohen, an immigration lawyer who is representing the Charlottetown siblings in the earlier prosecution involving the owners of the Sherwood Motel, said in an email that he's still reviewing his defence, and cautioned that there are problems with how the CBSA has proceeded.

He says he suspects CBSA went "much too far ... intimidating these accused with the huge posse of officers that raided their home on P.E.I. and mischaracterized their behaviour."

"It is too early for me to be more detailed."

A spokesman for Prince Edward Island's Office of Immigration said it has changed its program to focus on ensuring its entrepreneur class applicants are qualified, rather than based on a "first-in, first-out" system.

Andrew Sprague said since introducing the reforms this year, the numbers in the business immigration program have fallen.

He said fraud is not tolerated, and the province welcomes the CBSA investigations.

"It is a serious crime to lie on an application, lie in an interview with an immigration officer, or to submit false information or documents. It's fraud, it's a crime, and we understand there are significant reprisals," he wrote in an email.

"We do not want to see this type of alleged activity occur in our province and will take any measures possible to prevent it, including working closely with CBSA."

Federal Immigration Minister Ahmed Hussen, who was recently asked about the fraud case before the courts involving the two hoteliers, said his office is observing the cases, but declined to comment on whether Ottawa will require the Island to further alter its program.

"This particular matter we're looking at the investigation closely and following it," he told reporters during a visit to the Island in July.

Kane said immigrants who wouldn't be able to gain access through other provincial or federal immigration programs with higher standards are finding their way in through P.E.I.

"What you're seeing is a gateway into the province (P.E.I.) to secure permanent residence," she said.

She said P.E.I. and Ottawa should end the practice of allowing permanent residency before demonstrating participants in provincial programs are complying with their conditions.

"The answer to P.E.I. is instead of trying to create these business programs is to have people go and work there, and then after a year you can be nominated (for permanent residency)," Lorne Waldman, a Toronto-based immigration lawyer, said in an interview.

Kane said a system that grants work permit visas and ensures immigrants comply with the conditions before gaining permanent residency would be preferable.

"They should show they have opened the business ... and have a going concern with one to two years of tax returns filed and then look at it (permanent residency)," she said, adding there are many international students and potential immigrants who would comply with such a system.

In her search warrant application, Hicks says if immigrants succeed in creating a false impression of residency, they could use the address to apply for Canadian citizenship, "or obtain a status they do not qualify for, and all the privileges that go along with that."

The Canadian Press is choosing not to name the couple facing the allegations, as the CBSA investigation is ongoing.

The husband was contacted by telephone but declined to comment, referring the matter to the couple's lawyer, whose name he did not provide prior to hanging up. He did not return a follow up call, email and text seeking the lawyer's name.

"I can't answer questions from you," the man said during the telephone interview.

He said that in comparison to the Sherwood Motel prosecution, the allegations against him are "totally different."

Iranians facing higher delays for permanent residency than other nationalities

Canadian citizenship still not equal for all, due to ongoing issues with legislation