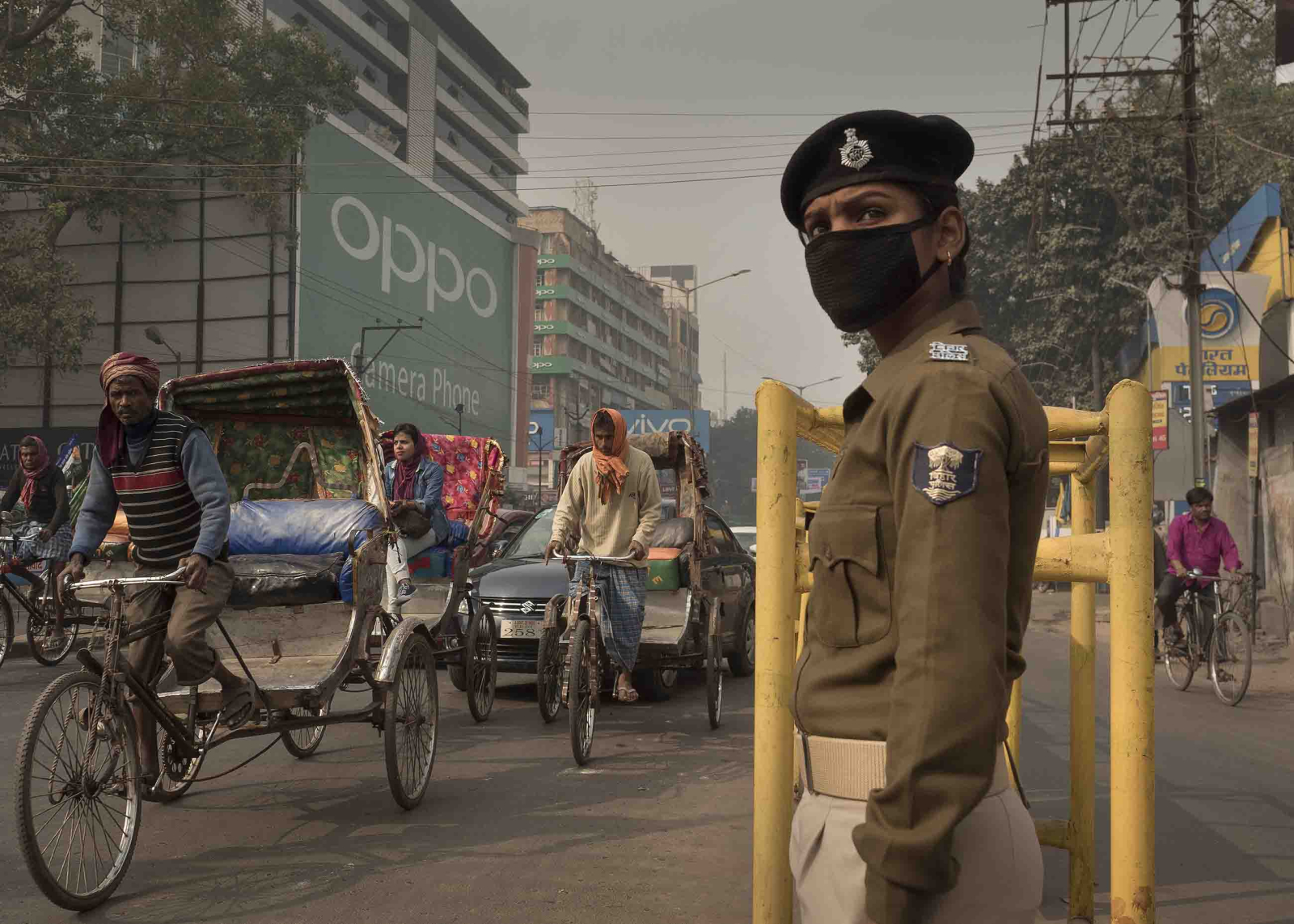 Traffic policewoman Sandhya Bhartj directs traffic in central Patna with only a cloth mask to protect her from relentless pollution. Photo by Larry C. Price/The Pulitzer Center on Crisis Reporting and Undark
Previous story
Next story

At the railway hospital in Patna, India earlier this year, an old woman took a raspy breath and croaked out her name: Annapurna Devi. For five years, her son says, the 70-year-old has been unable able to walk, to leave her home, or even talk for very long. Her symptoms flare up every year as the monsoon recedes and the temperature plunges. It is accepted wisdom in this city that winter brings disease.

Devi’s doctor says she has chronic pulmonary obstructive disease, or COPD. Her lungs are hyper-sensitive to irritants, which makes Patna, a rapidly growing city in the northeastern state of Bihar, a particularly difficult place to live. The air here — among the most toxic in the region — is a brew of gases and microscopic particles that can enter the lungs and lead to COPD, cardiovascular disease, and even cancer.

“We keep her protected from air pollution,” said Devi’s son. “She stays at home and at most visits the terrace at times. She’s too old now and is not fit enough to go out of the house.”

In 2017, concentrations of PM2.5 — the most dangerous type of particulate pollution — in Patna’s busiest streets met Indian air quality standards only 81 out of the 311 days that were monitored. On the worst days, the city can experience astronomical levels — sometimes higher than 600 micrograms per cubic meter of PM2.5 (see chart below). That is 60 times the World Health Organization’s recommended safe limit and 15 times the safety benchmark set by Indian government. This year, the WHO called Patna the world’s fifth-most polluted city, with Delhi following close behind.

PATNA IS AN ancient city of two million people on the floodplains of the Ganges River, and it lies in a pollution hotspot that stretches beyond Delhi in the West to Bangladesh in the East, bounded on the North by the Himalayan Mountains. In the summer, pollutants from the plains can easily rise to the upper reaches of the atmosphere and escape over the mountains. But in the winter, cold air and pollution arising from a mix of wood-burning cook stoves, smoldering garbage, brick kilns, construction, and road dust get trapped close to the ground. Emissions accrue into a smothering blanket that spreads out across the region. There are 94 Indian cities on the government’s non-attainment list for PM10, an already-dangerous particulate matter measuring 10 micrometers in diameter or below. Sixteen cities are on the list for PM2.5, particles nearly 30 times smaller than an average human hair.

The pollution exacts a high toll. Nationwide, more than a million Indians died from bad air in 2015, according to a recent Lancet study. If air quality were to improve to safe levels (40 micrograms per cubic meter by India’s standards), life expectancy would increase in Patna by four years and in Delhi by six, according to another tool.

Air pollution kills one million Indians annually. In the northern city of Patna, the problem shaves four years, on average, off residents’ lives.

PATNA'S GOVERNMENT is aware of the dangers, but a lack of political will, monitoring, and enforcement, combined with a dearth of manpower and budget for the state’s Pollution Control Board, has stymied or slowed most efforts at reform. It’s a story repeated across India — though it is arguably worse in Patna, the capital of a state so poor in governance that it lacks even a proper garbage disposal system.

“Given the general governance challenges in Bihar, and the limitations in state capacity,” said Santosh Harish, associate director of research at the Energy Policy Institute at the University of Chicago, “it may be that the Pollution Control Board in Patna may be even less equipped than some of the other cities.”

Patna has just one official real-time monitoring station capable of measuring PM2.5 concentrations. It is located in the middle of a busy intersection, and at dawn on a brisk day in February, as a gray curtain of smog hung over the city and cut visibility to about 50 meters, the device offered bad news: PM2.5 was measured at 283 micrograms per cubic meter. That’s a grim and not uncommon figure, but to get a true sense of air quality here, experts say that far more monitoring stations are needed — at least 26 of them, according to Ankita Jyoti, senior program officer at the Center for Environment and Energy Development in Patna. As it stands, the most decisive thing anyone can say about the air in Patna is that in its most high-traffic neighborhoods, it is thick and hard to breathe. Quantitative data is mostly speculative — though the problem is obvious.

As men jogged down the treeless streets here, their footfalls released puffs of dust from unpaved sidewalks. Yellow school buses filled with kids passed by amid clouds of black smoke, and migrant laborers burned coal and wood for their morning tea along the roadside. At the city’s central park, Ujjawal Verma, 59, was gossiping with his friends. “We are forced to come here every day to exercise,” he said in Hindi. “You see the dust in the air – it’s increased just like it has everywhere in India. It so far has not had an effect on our health, but we are breathing it in, so it must be bad.”

SUSHIL MODI, the environment minister and deputy chief minister for Bihar state, painted a far different picture. “I don’t think Patna is so badly polluted nor do I feel it,” he said. “I’ve learned that the monitoring station has been installed is in Taramandal, at the heart of the city where the most cars stop and go.

“If it were moved somewhere farther off, near the Eco Park,” he continued, “Patna would become the cleanest, least polluted city.”

Air quality experts lambasted Modi’s characterization — which they suggested is emblematic of a political class given to keeping its head in the sand. “Closing your eyes in front of the problem,” said Prashant Kumar, a professor and chair in air quality and health at the University of Surrey, “will not solve the problem.”

The state has taken some steps to combat pollution. The Bihar State Pollution Control Board (BSPCB) has received funding from the government for two more real-time air pollution monitors, each of which cost about 15 lakh rupees, or about $22,000. Ashok Ghosh, the new chairman of the BSPCB, said he would solicit funding from local businesses for 16 more. Ideally, a country the size of India would need air quality monitors every 25 square kilometers, said Tripathi of IIT. In fact, the latest science suggests monitoring every square kilometer because of local variations in air quality. While Tripathi says that level of precision is not realistic, even with low-cost sensors, he and his colleagues are testing low-cost PM2.5 sensors in New Delhi that cost 15,000 rupees ($220) and could fill in some gaps.

Scientists stress, however, that policymaking and enforcement cannot wait for monitoring to improve. Pollution control boards are among the most poorly funded and toothless state agencies in India. In Bihar, Ghosh of the BSPCB would like to double his staff and improve the lab facilities. “We have labs here, but they are not in very good shape. Unless you strengthen your lab, you don’t get proper monitoring,” he said.

THE BSPCB also does not have jurisdiction over a key pollution source: vehicles. Patna’s streets are regularly filled with aging auto-rickshaws, motorcycles, cars, buses, and trucks built to emissions standards set in the early 2000s. Standards have since improved and vehicles made today emit 82 percent less particulate matter.

In theory, the Transport Department oversees emissions testing, while the traffic police enforce the law. In reality, neither does their job well in Patna. Vehicle owners, too, do not mind paying bribes to obtain fake emissions certificates, said Afroze Beg, who runs an emissions testing center in Patna. “There is no one to question,” he said. “When our children’s generation ask us, ‘Father, did you get your emissions done honestly?’ — people won’t have an answer to give.”

Patna transport officer Ajay Kumar Thakur said that his department is taking air quality seriously and will open pollution testing centers at gas stations. “We will pollution-test each and every vehicle,” he said.

The Pollution Control Board has jurisdiction mainly over industrial units. In Bihar, that translates to roughly 5,500 brick kilns with tall chimneys that spew plumes of particles, soot, carbon monoxide, and carbon dioxide every winter during the brick-making season. In early 2017, the BSPCB asked operators to upgrade their century-old kilns to modern specifications against the threat of closure. But the operators, being the only industry in the state, form a powerful political corpus and they successfully lobbied to delay implementation.

OF COURSE, these sorts of institutional weaknesses for controlling pollution are not unique to Patna. “In general, most states seem to have similar weaknesses and limitations in state capacity,” said Harish of the University of Chicago. Driven by the Supreme Court and the activism of nonprofits, the country’s central government is pushing for electric cars; it has mandated stringent vehicle emissions standards that will be in place by 2020; and for the first time, the government is drafting a pan-India air quality action plan.

Now, it just needs to get state governments on board with taking action on air quality.

Back at the Railway Hospital, in the bed next to Annapurna Devi, 14-year-old Anita Kumar is sitting cross-legged in a purple sweater and jeans. The girl’s voice is raspy and faint, so her mother recounts how, six days ago, Anita felt tired climbing the stairs. Her throat was irritated, her voice became hoarse, and she experienced heart palpitations. Her parents admitted her to the hospital, where the doctors diagnosed her with bronchial asthma — a condition exacerbated by irritants in the air. Her parents do not know what is triggering the attacks, but they are hopeful that it will be cured.

“She was always healthy, even as a child she was always very healthy,” her mother said. “This is the first time she has fallen ill.”

Gayathri Vaidyanathan is an independent journalist writing about the environment, science, and society. Her work has been featured in The Washington Post, The New York Times, Discover Magazine, and Nature, among other publications.